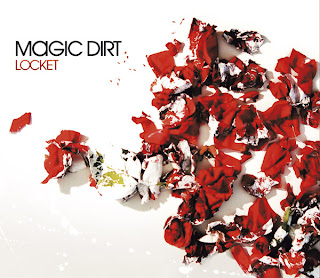 The new Magic Dirt offering explodes with the radio friendly grooves of Locket. After the stylistic accessibility of singles from Tough Love, Locket unleashes the animal that is Magic Dirt upon their new fans without remorse and reinforces their standing as one of Australia’s most dynamic musicmakers with their existing fan base. Raunchy and pounding, the band has never been as sexy and unrelenting. Sounding like the love-child of Joan Jett and Siouxsie Sioux, when Adalita sings, “Fuck it, I locked it, I lost it again”, you can almost feel the romantic nihilism.
Track two, Sucker Love, suffers from poor lyrical content; generally, more time seems to have been devoted to Tough Love’s lyrical maturity. “I’m a sucker for your love and I love to fuck it up. Well I’m a fuck babe” - very primal, down-on-your-knees animalism. This song is musically one hell of a ride; the guitar break at the end could be the new soundtrack to the psychedelic, nightmare boat scene in the 1970s Willy Wonka movie.
Gap is a beautiful song, reminiscent of The Velvet Underground and Nico. Gentle and lulling, the guitars in this song are mesmerising.
The beginning of the final track, 1 Thru 5, sounds a little like Hole - not a strong vocal performance but resounding all the same. All of these songs seem to have a theme about love lost, the moment when you realise that you’ve stuffed things up or the recipient of your love has rejected you. “I’ve given up on my three wishes. I’m not in love with you if you ain’t in love with me”. This song is my personal favourite on the EP due to its emotional sincerity and big rock ending.
The single Locket is taken from the band’s new album, Snow White. Look out for Adalita, Dean, Raul and Adam on the road as they tour Australia nationally throughout September to November.
Written for Faster Louder.