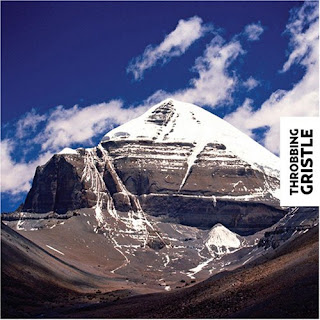 My mind is a twisted rag dipped in gasoline and ready to ignite. Throbbing Gristle is the zippo.

Images of hellfire and damnation interwoven with dank prison cages in a basement of some psychopath whose mother didn’t love him enough. That’s Part Two – The Endless Not, Throbbing Gristle’s first new release since 1980’s Heathen Earth.

‘Vow of Silence’ kicks off the quetiapine-party with the perfect antidote to EMO, indie, and all other genres of music to which I have become, to choose a polite term, hardened. ‘Rabbit Snare’ squeezes the death out of Cosey Fanni Tutti’s cornet like a half-mangled rabbit by the side of a darkened highway. The smooth jazz intonations of Chris Carter’s keys caress the thinly veiled psychoses of Genesis Breyer P-Orridge’s vocals on this piece. Peter Christopherson’s sampled sounds create a monotonous and mesmerizing backtrack to a song that appeals to the sensual side of the insane. Simply insidious, as the man says.

I already hear hints of Aphex Twin and Bjork, and wonder if they, like many others since the formation of Throbbing Gristle, took inspiration from this anti-art. The creators of the genre ‘industrial’, Throbbing Gristle has inspired some generations of imitators. Bands such as Front 242, KMFDM, Nine Inch Nails, Ministry and Die Warzau are the most consistently linked to this blending of Dada mentality with Metropolis-industrialisation of sound. But a biography on the band and each member’s impressive personal achievements in the areas of performance art, photography, writing and video production is another article to write, I fear. Too much, too long, and far too probing for a mere music review.

‘Separated’ creates a Valium-coated awareness of time, the stretching of infinity. The impending void of a world without action, lives wasted in a straight-jacket-like vacuum of medication and oblivion. Opening with the childlike tones of a xylophone, and murdered by the haunted growl of Genesis, arrives ‘Almost a Kiss’. Possibly the least accessible track due to the atonal quality of Genesis’ voice, this song could be the lament for the devaluation of romance. The lyric, “You fit me like a shrunken glove”, denotes the near-hope, yet abysmal reality, of love.

‘Greasy Spoon’ contains qualities of Nine Inch Nails: that predatory sexuality, animalistic and brutal yet oh, so, sweet. Contained in the mind of a masochistic victim the pleasures of hedonistic brutality. The scent of blood from your own form. ‘Lyre Liar’ moves forward to display direct attributes of the industrial music we know today, all farty synths and echo chambers, Gary Numan circa 1990s. ‘Above the Below’ is the soundtrack to a genetic morphing of my favourite sci-fi films, a song embodying the comic tragedy of a cold and lifeless human heart, plucked from its function by a curious alien.

“50 yards away. 50 yards away”. ‘The Worm waits its Turn’ is a flashback acid-trip of bent over Hendrix-guitar trapped in a dank chamber with a knife-like synth on the make.

“Grazing her knees on the railroad trees, ripping small chunks of skin away. She saw faint flickers rising from the sticky black asphalt. Glowing energy and radioactive heat twisting ribbons in the fire of Moses’ burning bush. Deliver no message any more”.

The only traditionally dance-friendly song, the lyrics raise this song to a platform where I must idolise Throbbing Gristle, just a little.

“…makes liquid blisters move towards her…her blood seeps down into the moment”.

‘After the Fall’ bids us adieu with a delicate piano piece of innocence and light, sounds of the machines build a wall around it. Obliterate it. But you know it’s inside, this innocence, this beauty. It’s simply harder to see at first glance.