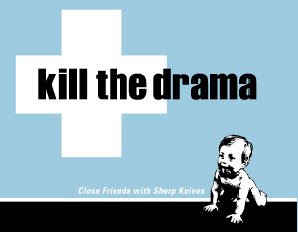 Formed in 2006, Kill the Drama consists of four musicians whose aim is "to redefine American musical boundaries". Heralding from Pittsburgh, the band consists of Bryan Laskey (vocals), Steve Stiller (guitar), 'Skinny' (bass), and Jason Godek (drums). The band released their first album, Close Friends with Sharp Knives, in 2007 and this is a review of that release.

I only recently noticed Kill the Drama on MySpace because the title song from their album sounds so much like Muse. Being a Muse fan, I could dig that; it's always good for upcoming bands to have a sound they're aiming for. The song is incredible; the vocals soar, guitars rage, it's a dynamic number. I am floored. And then I notice the band is...American?? They definitely have a UK sound.

Unfortunately, as so often happens when bands imitate -- or incidentally happen to imitate -- a well known band...disappointment follows. The vocals are too plaintive in some parts of the album that they begin to annoy me. Too EMO, just too much "woah woah woah"-ing. If Bryan could tone down on using this singing style for every song, the entire sound of the band would benefit. The specific culprits on the album are the tracks Cut the Black Away and Eyes Pried Open. I can see Twilight and My Chemical Romance fans really loving this, though. It's got to be said, its commercial appeal is definitely evident. I can see kids with black nail polish rocking out to Eyes... during a live gig.

The song Sunshine, however...ah, now we're back to the promise of the title track. This one has an immediate Radiohead-esque appeal. The vocal vibrato works here and comes across as suitably angelic as the singer's voice soars into an explosive chorus. Everything comes together in this song and, although you can hear the influences, the band owns the sound. Getting shivers as I listen to it, this song should have been their first single. It would have set less expectations for them to sound like Muse in their future releases.

Live Before it Kills You rocks out and sends me into a full-blown '80s reminiscence with its Bon Jovi guitar licks, a more sensitive take on Slippery When Wet, while Collapse is out and out die-hard romantic a la Phil Spector's wall of sound. The tone of Bryan's voice is beautiful in this track. Not grunty, not wailing, simply aurally pleasing in every respect. The boy can sing, which is more than can be said for many frontmen. Your Spine Quivers holds within it an excellent guitar riff by Steve, pounding drums by Jason, and someone turns Skinny's bass up (always a good thing; bass players are so often overlooked!).

At the moment, Kill the Drama shows IMMENSE promise, they just need to decide what kind of music they'd like to be known for. Not to limit artistic or creative potential -- and it's fine to be adept at numerous styles -- but it's integral for there to be a link throughout an album for a first release. To create a solid fan base with a debut album, fans need to know who you are and what they can expect. When Kill the Drama works this out -- and they will -- they will be a force to be reckoned with instead of just another EMO band.

This is an extremely impressive first release and I can't wait to hear how they progress. All the power to them!

Listen to Kill the Drama here.