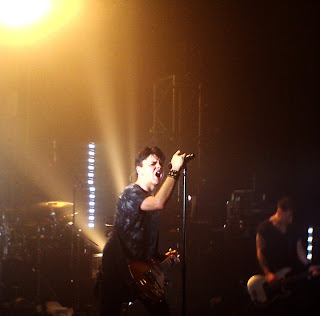 It took some 30 years to occur, but it finally happened: I saw Gary Numan perform live. I can't express the excitement I felt leading up to this night; an emotion difficult to express to people who aren't fans of the man.

My love of Numan began when I was 10 years old and, thanks in part to my older brother, my appreciation of his music deepened over the next 10 years. One of the most thrilling moments was meeting Numan -- albeit, over the phone -- for a 25 minute interview in 2006 following the release of Jagged. He was everything I somehow knew he would be: witty, self-effacing, and kind.

The gig tonight was Numan's first time in Australia since 1980 and, for many of the fans, this was their first opportunity to see their idol in person. The crowd was varied: punks, goths, ordinary people...the gamut of society. I was pleased to find his appeal to be wideranging.

The band Pivot supported Numan tonight and, by the end of their set, many of the older fans in the front row had their fingers in their ears due to the volume. I was wondering how they would cope with some of Numan's newer work! Pivot is an interesting three piece band with a fantastic drummer who delivered an unpredictable set that, strangely, created the perfect mood for Numan's entrance.

Numan blasted on to the stage with In a Dark Place, his raven hair and smoky, kohl-rimmed eyes penetrating the crowd. His energy levels throughout the show were inspiring, his voice faultless, and sense of humour intact. There will be many fans leaving the show tonight with snaps of Numan laughing; not what you might imagine from the 'Godfather of Electronica' or the myriad other names the music media has conjured up to attempt description of his vast influence.

On his website, Numan said, leading up to this tour, that "going back to Australia to play live has been something I've wanted to do for so many years".

"This is a great and exciting opportunity for me and, in many ways, it couldn't have come at a better time.

"My music has grown increasingly darker and more anthemic over the last four albums and the latest band line-up gives the songs an even greater degree of depth and aggression on stage."

The gig had a high level of theatricality, with Numan creating an electric atmosphere (excuse the pun) like some gothic prince holding court, we his fawning servants. Each time I snuck a peek at the crowd, people's faces were lit up with sheer joy, ecstatic to be sharing this moment. One moment of angst was felt when a falling-down drunk imbecile tried to start a fight in the middle of the crowd, but we happily fed him to the security guard and, thank you very much, continued in our revelry. (Unfortunately, he hung around outside the venue and threw a punch at one of the guys he'd been pushing into while this punter waited for his cab. There is, seriously, no accounting for wankers. Wankers in striped polo shirts don't mix well with booze. There, I've said it. Hopefully, The Tivoli security didn't let him enter in that state...)

Back to the gig! I did manage to obtain a coveted set list, so I have here the songs as they were played. Should I spoil it for you? Numan did include classics such as Cars, Metal, Are Friends Electric?, and Down in the Park; I was exceedingly pleased about Metal, as it's one of my personal favourites from some years ago. However, the stellar moment came during Pressure. My body goosebumped from head to toe. I shuddered. And then Numan caught my gaze and, in that moment, the intensity and pure sexuality of his music hit me. I know some people have called his earlier music clinical and machine-like -- I tend to disagree -- so it was gratifying to feel the sensuality of this man glimmer throughout his performance.

Numan was supported on the night by keyboardists Ade Fenton and David Brooks, bassist Tim Muddiman, guitarist Chris McCormack, and drummer Richard Beasley. Their enthusiasm and various influences provided an updated feel to the music and a fullness of sound. Fenton displays fabulous quantities of energy onstage and looks excited to be playing this set; the most fun you can have on keys!

I could write for hours about what tonight meant to me. About how glad I was to see new fans with the old, maybe coming to check out what their idols -- Trent Reznor, Marilyn Manson etc -- have raved about all these years. On the 8th March, Numan will turn 51, and it's incredible to comprehend how long he's been creating amazing music and frankly, how young he looks! Since Tubeway Army's Down in the Park charted in 1979, he has been striving to create music that is 'true'. Recent years have seen him become more comfortable with himself and his fame, and attract an entirely new bunch of fans through appearances on The Mighty Boosh. When I interviewed Numan in 2006, he spoke of the creative process, of his family, of what it all meant to him this far down the track. To still have so much enthusiasm, passion and integrity 30 years on from that first slice of fame is something to admire and respect.

If you don't know about his music, look it up online, buy it. If you were going to buy a ticket to see him but reconsidered...reconsider again. Buy the ticket! If you don't, you'll be kicking yourself when all your friends tell you how amazing it was. You can catch Numan at The Enmore Theatre on the 5th March and The Forum on the 7th. For other dates and specifics, check his website.

Footnote:
Thanks to my wonderfully tall Distaudio for taking the above photo with my cruddy little 2mp phone camera. I KNEW I should have taken my camera with, but so many venues confiscate them at the door. Judging by the mass of cameras at the gig, there'll be plenty of amazing shots online tomorrow ;) Anyhow, thanks for being an extension to my 5'4", my love!