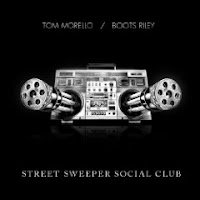 This album is, simply, made for rocking with your c*ck out. Well, I don’t have one, but you get what I mean.

Street Sweeper Social Club (SSSC) might not require a lengthy introduction for many people as it is a new collaboration from Rage Against the Machine / Audioslave / Nightwatchman guitarist extraordinaire Tom Morello. This time, he joins up with The Coup’s ‘Boots’ Riley, a man with a gift for the rap, a powerful lyricist.

From the first track, ‘Fight! Smash! Win!’, SSSC annihilates with powerful riffs and switchblade lyrics. Tom’s musical stamp is written all over these tracks, and there is in parts a strong resemblance to Rage Against the Machine (RATM). Let’s just get THAT closet monster right out there to start with, because the comparisons are inevitable. Tom was a profound part of RATM so of course his prints are going to be all over SSSC.

However, Boots’ vocals and lyrics add a new dimension to SSSC’s music: grass roots activism. Boots’ lyrics go “rat-a-tat-tat!” into your brain and stay there, creating ideas and empowering the listener with his “this is where it’s at” attitude. He’s like a switched on, funky John Lennon. Listening to these tracks is like the animation in those old Batman episodes: “BAM!”, “POW!”. Yes, it’s that freaking good.

By now, you’ve probably seen the music video for ‘100 Little Curses’, a track with some ‘sock it in the kisser’ lines for corporate America; those wealthy hounds who suck on the blood of the people. ‘The Oath’ grooves it up with some distinctly Hendrix overtones; many of Tom’s fans say he’s Hendrix re-born. ‘The Squeeze’ has got a driving rhythm that just prances along and teases throughout the track. ‘Clap for the Killers’ is a predatory, snake-like groove that stalks those corporate gangsters:

“Well I wrote this for criminals
But they the ones who wrote the laws
They ain’t on TV gettin arrested all up in their draws
They stick their hands up politicians
Make em move their jaws
And they be starving folks for bread
Until their breath pause.”

One of my favourite tracks on the album is the next one, ‘Somewhere in the world it’s midnight’. The intonation of Boots’ lyrics creates a fantastic syncopation that rides on top of Tom’s purring guitar. “Somewhere in the world it’s 3 o’clock, time to get out of school and think”: so ridiculously catchy. I can see in my head thousands of people at live gigs dancing and singing along to this song. Tom plays guitar and bass on the album and the similar styles create this pounding rhythm that your butt really can’t resist. So as well as intelligent lyrics, powerful vocals, we’ve got the arse wiggle ingredient. Ah, it’s absolutely irresistible!

Stanton Moore played drums and percussion on the album, and contributed to the writing process on ‘Shock you Again’ and ‘Megablast’. ‘Shock you Again’ reminds me of the best of early-style Red Hot Chilli Peppers. Next track, ‘Good Morning Mrs Smith’, honestly gets right down in there...to the sweet spot. Boots’ raps and grunts glide like honey over the raunchy bass line; this song is sex on a track. The lyrics, of course, have nothing to do with getting down and dirty:

“You said your life was something like the inquisition
All you could do was lay there in prone position
I said there’s love inside the people connectin
and interactin
strugglin
finding direction
That’s why you see insurrection.”

‘Megablast’ displays the reasoning for the explicit lingo tag (whatever you do, don’t get a ‘cleaned up’ version of the album; it’s best a dish served with extras, the expletives are the hand grenades):

I totally dig ‘Promenade’, the next track, with its jaunty square dance rap. Part Saturday Night Fever, part Oklahoma. It’s kind of bizarre, the combination of funk, rap and western, but it works. ‘Nobody moves til we say go’ is my personal favourite; the bass line in this digs in deeeep.

Rarely do I review an album which is 100% fabulous from start to finish but SSSC has done it. This is the perfect album. Unfortunately for the band, this always sets up a nasty precedent, but it feels like they have a lot more to say so I’m not too concerned about the follow-up meeting expectations. In the current musical environment, where older musicians with strong opinions are throwing in the towel and other musicians in the top 40 don’t have a hell of a lot to say that’s worth listening to, SSSC is a breath of fresh, luscious, ripe air. Take a deep breath and let something inside you bloom.

If you’d like to learn more about what drives SSSC, read my interview with Boots Riley here.

Fight! Smash! Win! seems that it could be used as a three word blurb for this album.

It is so fitting as a title track for the whole album.