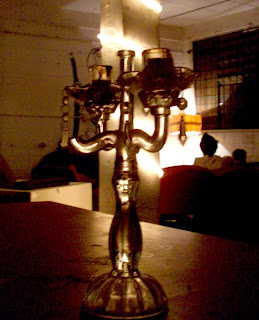 Last night was a surprising evening.

I'd heard of this venue called The Hangar, and I'd heard of a musician named Hunz. What I hadn't expected was that this combination would prove so ultimately satisfying.

I headed to The Hangar to see what the buzz was about. This venue puts on gigs consisting mainly of independent local bands from diverse genres. One of the few supporters of unsigned musicians left in this town. It's a warehouse-style set-up with a vibe I can only describe as reminding me of 1980s house parties, where everyone turns up with a bottle of wine and your friends' bands play for free all night. Except this cost $10, a very small price to pay.

There were four bands on the set-list for the night, but I had particularly come to check out Hunz' music after hearing his songs on MySpace. The performing Hunz consists of three musicians: drummer Richie Young, bassist Phil Evans, and Hunz (Hans van Vliet) himself on keyboard, vocals, and other bizarre and interesting electronic instrumentation. From the moment their performance began, I could tell Hunz is no ordinary, run-of-the-mill musician. The set they performed was tight, musically proficient, and presented songs of such a high quality, I was a little astounded. Not what you expect on a $10 night out in Brisbane.

I'll provide links throughout this blog so you listen for yourself, but my first impression of Hunz' style was Gotye meets Alessandro Cortini with a bit of Midnight Juggernauts thrown in for good measure. His music is highly individualistic, melodious, and his soaring vocals reach inside your chest and caress your heart a little. Yes, there were moments when I had goosebumps (so did my boyfriend and, musically, he's really difficult to please!) and at one point, just closed my eyes to allow my mind to wander where the music wanted to take me.

The professionalism of the complete band impressed me greatly and apart from Hunz' sublime falsetto, the drummer and bassist created a persistent, rhythmic, driving force. The layering in Hunz' programming meant there was absolutely no void created by the lack of guitar; the sound was full and luscious. Meeting the guy (and his lovely wife) after the performance, he seemed very down to earth and actually, dare I say, nice. As a music journalist, it's not often you meet musicians who are talented AND unpretentious. I like it when my cynicism is challenged like that!

Apart from Hunz' genius, there was one other band - of which I'd never heard - whose music I really got into: Twist Oliver Twist. They've had a bit of a reverse impact on me though, I might say. Last night, their performance was so energetic and amazing, with the highlights being the funky bass playing and vocals. They had a very '80s sound, reminding me a little of Orange Juice, ABC, with the lead singer/bassist emitting a slight Madness vibe (that punk/ska energy). However, upon listening to their MySpace when I got home, they sounded like the Presets...WTF? I think I'd like their recorded music if it more closely represented their live sound. That rich bass tone - the highlight of their music live - and the singer's gorgeous vocals are astoundingly hidden in their recorded music. Definitely a band to watch, though. Their live set was driven and vigorous.

The setting added to the creative air of the night, with small bulbs illuminating the outline of the performance area, the dim lighting shadowing the crowd who were relaxing on the floor in the bean bags. The punters were an interesting bunch, all very stylish in their own way, with some definite throwbacks to the '80s alternative scene to which I belonged. (There was one small group of four, all dressed in black, sitting in a circle on the ground outside smoking...I could have sworn they were my friends and I circa '86!) No kudos to the bubble-blowers in the crowd though; came to see a band, not bubbles blocking my view of the band. Overall, I WILL be at The Hangar again some time soon.

You MUST check out Hunz on one of his social networking sites, because he really is an inspirational musician on the Queensland music scene. He's also performing this Thursday night at the X&Y Bar as part of the Big Sound Summit. This guy is going to be HUGE one day soon, if the world has any justice in it.

It was a good night last night. Yes, I partook of rapturous, unearthly musical delights and survived to tell the tale ^_^. Dionysus eat your heart out.

Really great to read this review. You've captured how I felt when I first saw Hunz last November. Read more about that here: http://andrewmcmillen.com/2009/08/18/what-makes-a-great-live-performance-for-creative-deconstruction/

Hope to see you at the Big Sound showcase set!

It was lovely to meet you too! I just thought I'd add that we spoke to Bryn, the keys player for Twist Oliver Twist, before the show. He was telling us how their music has taken a more guitar-driven turn which will be reflected in the EP that they are just finishing. I thought that the new material was really fun, and they are always such a pleasure to see.