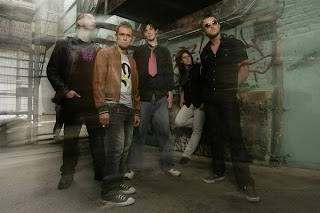 Listening to the first track Lethalogica on West Australian band Ravior's new EP, Sub Rosa, I'm reminded of old Soundgarden. Remember Chris Cornell before he met Timbaland? That crazy energy, those wailing vocals and '70s guitars? I hear something in Ravior's music initially that gives me a sense of the best of the '90s happening all over again.

The EP itself includes nice dark, brooding design elements which are professionally reflected in their website, MySpace etc. But yet again - argh, another pet hate of mine! - I can't find the band members' surnames anywhere. You're musicians guys, not some creepy online perv. You can own up to who you are and take the credit / criticism that comes with making music for a living! Oh well ... Ravior consists of Trent on vocals, KG (oh god, not even a real name!) on bass, Paddo (it gets worse) on drums, Rodney on guitars, and Rhino (oops, there you go, just lost me) on ... more guitars? On the title of the EP, it might have been opportune to show some originality in the titling, instead of naming it after a 2003 album by Eagle-Eye Cherry. It also helps out music media when reviewing if you provide an image of your EP somewhere - on your website, MySpace, anywhere - otherwise someone like me just picks some random photo from your MySpace. Press FAIL. But back to the music ...

Second track Animal is decidedly more commercial sounding, not necessarily a bad thing. This track is just much more mainstream than the first, heading Ravior to a different potential fan base. The vocals are consistently strong - I love it when people put in the effort - and there's a hint of The Edge in the tonal qualities of the guitar riffs. They also remind me a little of Noiseworks ... remember them? Solid, mainstream rock. Third track, Age of Reason is, yes, a cover of the John Farnham hit and, although I'm not a Farnham fan by any stretch of someone's warped imagination, I think his version was better. Always a risky move putting a cover on an album, let alone an EP. It just seems lazy, especially for a first release.

Final track SDP is the slow, emotive piece on the EP which is sadly ruined for me by bad mixing and inappropriately jarring drum programming mid-song. Which is a shame, because the end of the song screams to life with some great guitar riffs and lovely vocals.

I can't say this EP has inspired me greatly or has displayed anything unusual - it's in fact a bit disappointing for a band that's been playing live since 2006 - however Ravior should find some commercial success through radio play because their music is made for mainstream rock programming.