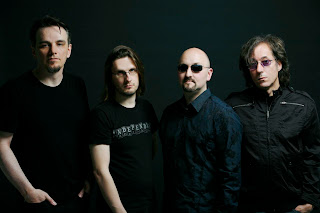 It's rare that I will attend a gig not knowing much at all about a band. I'm usually an avid fan or at least familiar with the music on offer. Porcupine Tree was a different matter. I had a limited recollection of hearing a couple of their songs played on Triple J in the '90s, but I always associated them with that Tool, prog rock style, which bored me senseless at the time when I was into NIN, Ministry etc. I dismissed them somewhat.

Fast forward to this past week when my partner persuaded me to see them with him at The Tivoli, Brisbane's most beautiful live venue. It was an interesting experience, seeing a band with no knowledge of them or their music to back it up. As I watched the fans roll into the venue - many wearing Tool t-shirts - I became a little wary. "Please, no prog rock tonight!", I begged of the music gods. I didn't feel like being bored to death for several hours while my feet steadily ached more and more (a symptom of seeing a prog rock band, I've found, because you don't dance or move much so your feet become anchored to the floor and hurt like buggery).

The Australian support band didn't help. Yes, their music was fine, but it was all 'out there'; no light and shade, just 100% full-on constantly. Their set went for waaaay too long and frankly, I switched off after the first four numbers. And note to Australian bands: saying 'fuck' every time you open your mouth in between numbers doesn't make you sound so much cool as illiterate.

Prior to Porcupine Tree coming on, we met up with a couple of new friends who were also die-hard fans, so I was at least hopeful they wouldn't completely suck. Over the loudspeaker came the message that none of the performance was to be recorded on video cameras, so if you see some vids pop up on YouTube, they're not authorised by the band. Next, the lights dimmed, and the band walked onstage and announced they would be playing the first disc from their new album, The Incident, in its entirety. "Nooooooo!", I screamed internally... I could imagine the next hour being utterly bored to death while my feet grew roots.

I couldn't have been more wrong. The combination of the band's polished and tight performance, the inspirational visuals and lighting, and the dynamics of their music delivered a revelation to me: I love me some Porcupine Tree. The album is incredible and now, of course, I'll have to buy it. Porcupine Tree had its Tool-ish moments, but they were few, and I was left with the overall sense of an up-to-date, more acerbic version of Pink Floyd's Dark Side of the Moon. The combination of dark Edvard Munch-style visuals and this music that catapulted me from elation to nihilism to love to pain was gut wrenching. I felt as though throughout the entire performance I was on a small boat in the ocean: sometimes the ocean was smooth and gentle and I could gaze at the stars, other times the waves threatened to throw me into the dark depths, never to see the stars again. Yes, the performance affected me. My favourite song from this part of their performance was 'Circle of Manias', which is simply awe-inspiring.

After EXACTLY a 10 minute break - yes, the band had an onscreen counter - they returned to play some older songs, which pleased many of the hardcore fans who expressed their appreciation through, in some cases, interpretive dance moves, which was quite amusing to a couple of us. However, I found the older songs much less impressive than the band's new music and drifted off a little toward the end of the performance. One thing I will say about the Porcupine Tree fans is that they are dedicated with a capital 'D' and lovingly showered the band with appreciation throughout the gig. Actually, it's difficult for me to recall experiencing such love among punters in a long time; usually, the poseur to genuine fan ratio is higher and many people seem to be at gigs to be seen or take photos of themselves versus listening to the music. Porcupine Tree fans were there 100% for the music, which was frankly delightful to experience. I definitely felt the love and positive atmosphere. And no violence!! Loved it.

When the gig came to its end I was, I must admit, a new fan of Porcupine Tree. They're evidently in this industry for the music, not the groupies or the potential corporate ad dollars. Their no bullshit, love us or leave us attitude is refreshing and I'm happy to say that the next time they tour Brisbane, I'll probably be in the front row and I might even know all the words to their songs.

And the beat goes on, as my love of music continues to grow stronger every day...thank you, Porcupine Tree.

Find out more about the band here.

The above photo is taken from the Porcupine Tree website and is by Diana Nitschke.

Superb show...arguably better than their ridiculously great performance at the same venue in April '08. Music for grown ups.

Finally, a band we can agree on! I happen to like prog rock, and I'm a big fan of Tool. Why is that? One, I don't much care for dancing. I'm just an up tight, outta sight white guy with no rhythm. Two, I prefer my aesthetic on the dark side - anything I can write to, essentially. I've got the following albums: Deadwing, Fear of a Blank Planet, Lightbulb Sun, Signify, and Sky Moves Sideways.

Favorite song: 'Last Chance to Evacuate Planet Earth Before It Is Recycled' (Of course!)

Glad you liked the gig,