Save the Regent Theatre

If you follow me on Twitter, you would know by now that the impending destruction of Brisbane's Regent Theatre is, quite frankly, really pissing me off. A venue which not only houses some of my more memorable teenage experiences on my way to becoming a film buff, but which was also a regular venue for my Dad when he lived in West End in the '50s.

The theatre, which was later converted into a cinema, opened on Friday 8 November 1929. It is a gorgeous example of deco architecture, particularly the Regent Showcase Theatre, which the developers plan to turn into a shopping mall with offices above.

I particularly recall when The Regent was used to its absolute best as a cinema: showing an approximately four hour digitally re-mastered version of Lawrence of Arabia, with two intermissions. I've dressed up as Magenta and danced to The Rocky Horror Picture Show in the front row. It has also been the home of the Brisbane International Film Festival every year since its inception.

On top of all this, it's a sublimely beautiful building and, despite developers arguing to the contrary, it is not enough to salvage the foyer and demolish the rest of the building. The Regent Theatre foyer leading to...a store? Fuck off.

On Saturday 26 June 2010, Distaudio and I headed off to the Rally for the Regent in Brisbane's CBD. We rallied. We asked people to sign petitions. Later, we sat in the foyer of the theatre and had a coffee at Aromas. While we were there, so many tourists, out of towners, and locals walked up to the theatre doors - which are locked shut - peering in, wondering what was happening. When we told them, they were devastated. They were absolutely appalled that our governments (local and state) would allow this to happen. One woman from Napier, the art deco capital of New Zealand, actually started to cry just thinking about the complete disregard for architecture displayed by our governments. Some people from Melbourne said with pride that, when The Regent Theatre in Melbourne was threatened, there was no WAY the people of Melbourne would allow that to happen. They were disgusted in the Brisbaneites who don't give a damn. Some tourists from China were shocked that our governments would so willingly give up our heritage. "You sell your culture?" one girl asked me, in disbelief. Everyone thinks that this impending development is beyond ridiculous, beyond tragic, and I for one am disgusted that not our Lord Mayor Campbell Newman nor our Premier Anna Bligh will save The Regent once and for all, in its entirety.

I grew up in the '80s, when then Premier Joh Bjelke-Petersen used to hire the Deen Brothers to come into Brisbane under the shadow of night to demolish heritage buildings in our CBD. I mistakenly thought the Queensland Government had grown since these times of corruption, but it seems now it's just done in broad daylight instead.

It's still not too late to reverse this decision. What can you do this month and during early July to save The Regent?

There's also a gig at The Globe on 10 and 11 July, headlined by Wolfmother on the 10th and Katie Noonan on the 11th. Your participation would be appreciated.

We who care about preserving Brisbane's architectural heritage would love you to help us reverse this decision, so please sign the petition and write to Bligh now. We have no time to waste!

Here are some photos from Saturday's Rally for the Regent, organised by Jason Sharland and supported by Aidan McLindon, who has provided his support for the petition. Thanks so much to everyone who joined us in making this important statement. 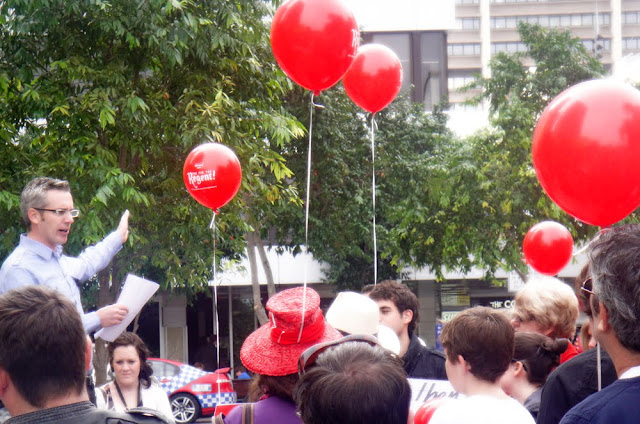 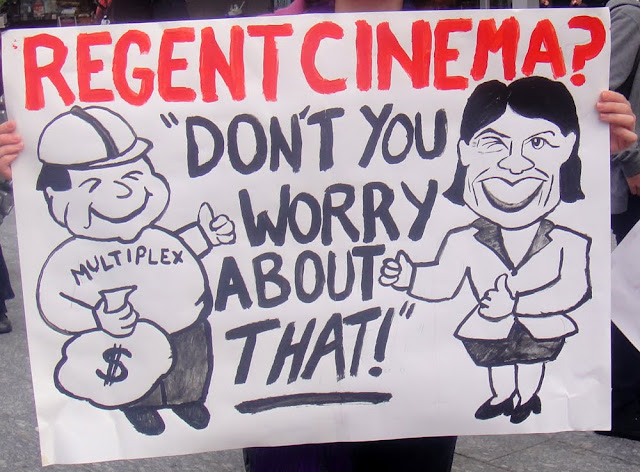 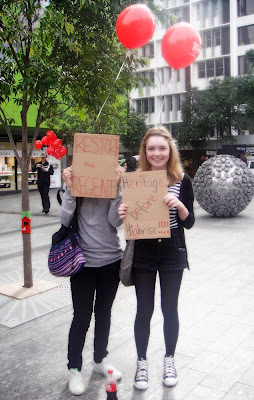 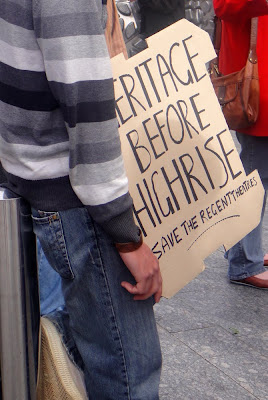 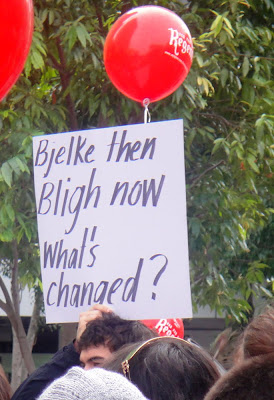 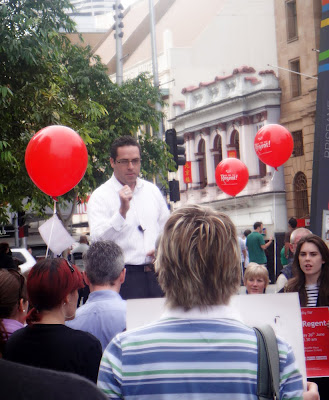 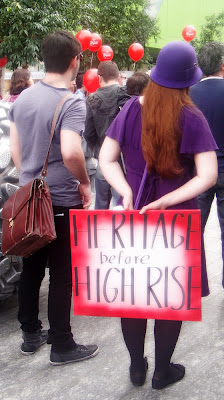 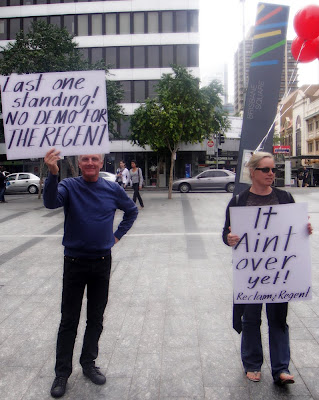 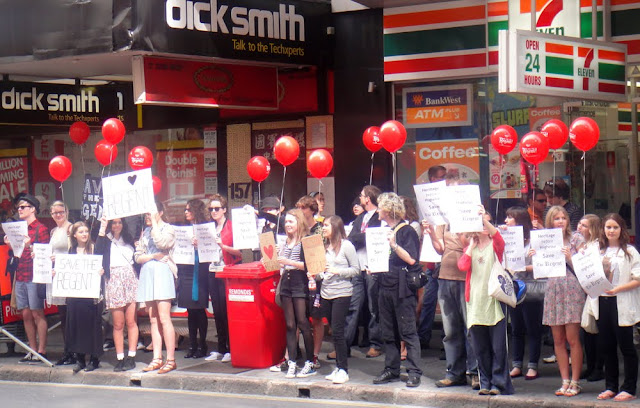 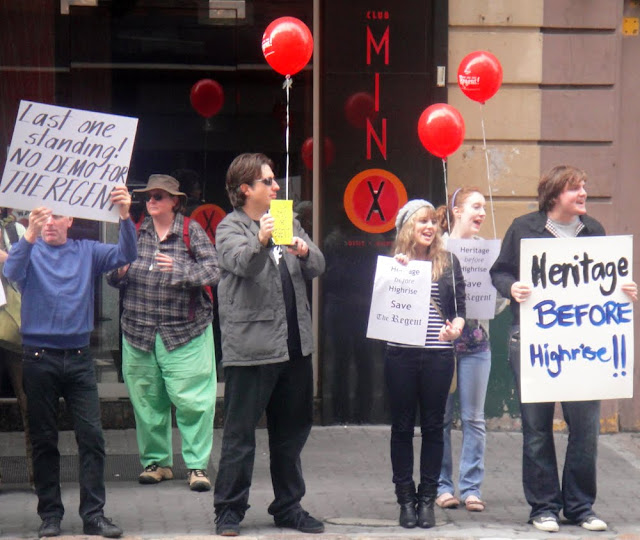 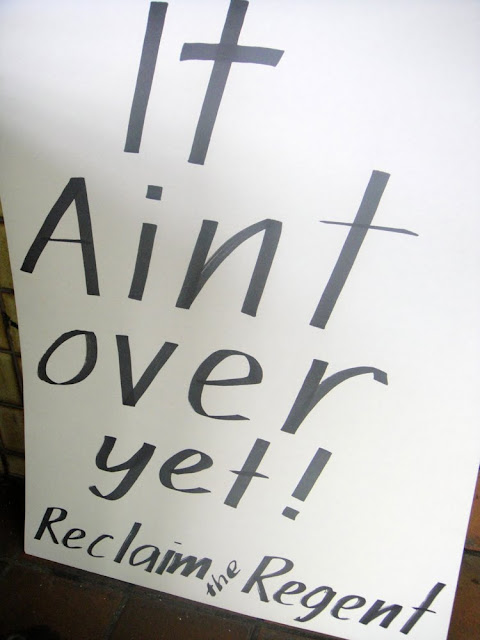 BRILLIANT BLOG My Aural Fixation!!!!!!
WE CAN STILL SAVE the REGENT! I TOO HAD COFFEE
AT Aromas after the RALLY & MARCH - with relatives and friends visiting from the UK & NEW ZEALAND. As an ART DECO COLLECTOR of the last 40 YEARS!!!! I remain in TEARS, and will SHOUT to everyone I encounter during the course of my day for the next few weeks, until this TRAGIC and ABSURD DECISION to DESTROY THE REGENT is OVERTURNED!