You've probably read the news today that Whitney Houston has been found dead in The Beverley Hills Hilton.

Twitter has been filled with outpourings of grief from fans and musicians, alongside "weren't they great / such a tragic loss" style tweets from music media accounts.

What annoys me is the irony of the music media appearing sad about musicians whose downfall they appear to have taken a sadistic, voyeuristic pleasure in over-reporting prior to their death.

Take, for example, Rolling Stone magazine's hurried tribute to Whitney through photos. Lovely. Makes it look like they really care. But over the years, they've dedicated quite a bit of web space to Whitney's downfall: 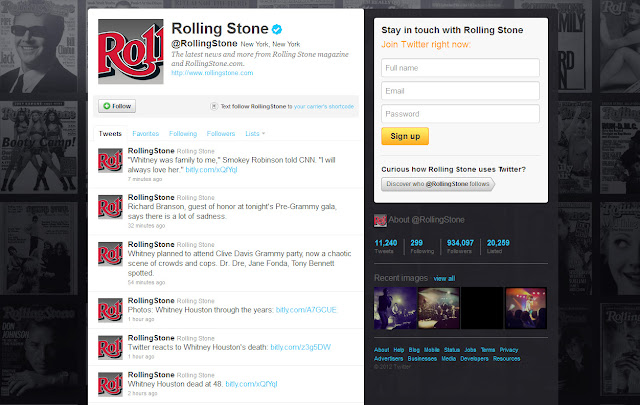 Now I'm not picking on Rolling Stone specifically. But as one of the largest music media websites / magazines in the world, you'd think they'd be trying to set a higher - less tabloid - standard of journalism. That they should be consistently reporting on music, featuring interviews with musicians and the like, versus reporting on the seedier personal aspects of particular musicians' struggles with drug addiction.

It's like the music media has a 'newsgasm' whenever a musician dies. Their Twitter accounts go into overdrive, their websites fill with 'memories' of that person. I know this is what the media has become and it's what is to be expected these days, but shit...do they even REALISE the hypocrisy involved? I'm sure you all thought this when Amy Winehouse died; one minute they trash a person, the next they hold them up on a pedestal. And they say that's the price of fame. Well, it shouldn't be.

On the other hand, you have websites which simply ARE trashy tabloids. Here's a classy piece on a website named Celebslam:

"Pacific Coast News says that's a wasted Whitney Houston leaving Tru Hollywood nightclub last night "appearing to have blood dripping down her leg and scratches on her wrist." I know, she's making me all hot, too. In related news, apparently you can now pay your bill with crack at Tru Hollywood nightclub. I had no clue!"

At least the tabloids are consistent. Which is more than I can say about the popular music media.

And that makes me sad.

For me, what's worse than the hypocrisy is that it's become the ultimate in internet 'firsties' and across the board, not just the more tabloid sites.

At the moment even The Guardian's website has seven articles on its front page. Whereas onece it would be a simple, straightforward news story the next day and an official obit a day or two later, these days it's see the photos, watch the videos, their Five Greatest Moments, how celebs have responded on Twitter, how they changed the world, what their legacy will be, read this classic interview. And all done asap to make the most of Google rankings and to maximise page hits.