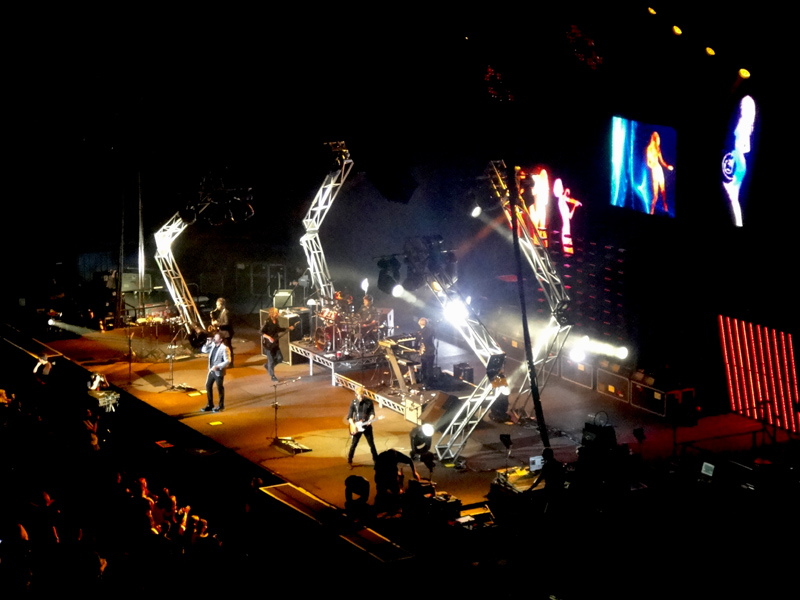 If you follow me on Twitter, you know the drill: I'm a bit mad about Duran Duran and have been since 1981. I used to patiently wait for my Smash Hits magazines to arrive in Australia from the UK and, when they did, I'd pounce on them, tear out the Duran Duran poster and whack it up on my bedroom wall. Each night before I went to sleep, I'd kiss John Taylor or Nick Rhodes (depending on my mood) and dream of living in their glamorous world instead of a farm in Queensland.

Now, I'm 42, and not so partial to kissing glossy paper pictures. However, I am still mad about music and Duran Duran (along with Depeche Mode) remains a band for whom I hold a lot of passion. I am passionate about their musicianship. I am passionate about their desire to keep writing music instead of resting on their laurels. I appreciate learning more about them as human beings through the small glimpses offered by their Twitter accounts. I probably pester John on there more than I'd like to admit. But all in all, I'm much less of a stalker than I was in 1981 when, lucky for them, the closest I got was joining their 'official' fan club.

So, because I adore them and I rustled up a couple of others who felt similarly, we attended their gig tonight at the Brisbane Entertainment Centre. How was my night?

It was a hairy drive to the gig, being held at BEC which is usually a 30 minute drive from the CBD, but took me 50 minutes due to heavy rain and poor visibility. Why that place still exists confounds me. Few bands can fill it anymore and it's hard to get to. Would've been better if the band had played at the Brisbane Convention and Exhibition Centre at Southbank, which is much easier to get to, being in the heart of the Brisbane CBD. I've seen The Mars Volta, The Living End, Massive Attack and Elvis Costello play there, and it fits a decent crowd without compromising on atmosphere or sound.

Tonight, the venue had sealed off a quarter of the arena with a wall because they obviously couldn't sell all the seats. This surprised me, as the last time I saw Duran Duran perform there, the place sold out. Perhaps indicative of the expense of the tickets? While my friends and I bought tickets for $120 months ago, tickets were being sold this week for $65. My suggestion would be the next time a promoter books a venue in Brisbane for Duran Duran, sell General Admission standing tickets for the floor at a reasonable price and then seats in the stalls for a slightly higher price. That way, people can actually DANCE.

As it was, despite buying tickets really early on, we were seated in row Y, right up the back in the middle section. So we just walked one row back and danced right at the top of the stairs for the entire gig. Which was fun, I must admit. I would've loved a chance for a GA ticket so we could've run down the front, had a better view, and danced in front of the band. It's always a better vibe dancing in a crowd vs sitting in a chair like a geriatric.

The band looked - as always - incredible. Nick Rhodes completely 'New Romanticised' the evening with white ruffles and had his usual air of aloofness interspersed with jokes and cheeky grins. Simon Le Bon's voice gets better each time I see him. Roger Taylor is a solid drummer and he and John Taylor create that special groove that is so easily recognisable as Duran Duran. Part funk, part disco, it's catchy as hell. John...where do I start. It's impossible for me to be unbiased about the man. He sets me on fire. There's just something about his bass line that means I have to shake my arse. The band was accompanied by their usual guitarist, a saxophonist, percussionist and backing vocalist.

The show was phenomenal. The band has so much energy and they continue to power through sets, choosing wisely from a discography that spans over 30 years. Tonight's set consisted of:

Highlights for me were White Lines - which they performed an exceptional cover of - Careless Memories, Ordinary World (dedicated to the people of Syria), Sunrise and Girls on Film. They also, while jamming, slipped in some Frankie Goes to Hollywood.

The band appeared to have a great time onstage, with Simon Le Bon walking into the crowd at one point to choose a pink-haired woman to introduce him as part of the band intro bit. It was hilarious to watch from up on high: as he walked into the audience, a throng of women just hopped out of their seats and flocked to him.

As usual, the graphics accompanying the performance were very cool, my favourites being the montage of Dia de los Muertos skull-faces and images from the film, Metropolis (one of my all time top films). The stage set-up itself was pared back without the glitz. With the exception of Simon's glittering jacket.

I had an amazing time. I arrived home, burst through the door and immediately began talking too loudly to my boyfriend about what he'd missed, jumping up and down like an excited kid.

If you live elsewhere in Australia and are um-ing and ah-ing about whether or not to buy a ticket, please do. This was my third Duran Duran gig in around nine years (had never seen them before that, so making up for lost time) and I never regret spending the money to see them. This time particularly I found interesting because they played more of their newer music, which created a different atmosphere to other gigs I've seen.

These guys hold respect for we fans and you sense this because you see the sweat and the energy they expel to bring a good show to us. They put their all into it and, as a fan, that's all I ever want from musicians I see. We've had a lengthy relationship, Duran Duran and I. In fact, the longest relationship of my life. They're now a part of me and tonight I saw how much we are also a part of them.

To the band: I adore you. Never stop. xx

For more info, check out the Duran Duran website.

Here are some photos I took from my dodgy seat. If you re-post elsewhere, please credit to me - Amanda Schneider - with a link to this site. Cheers. 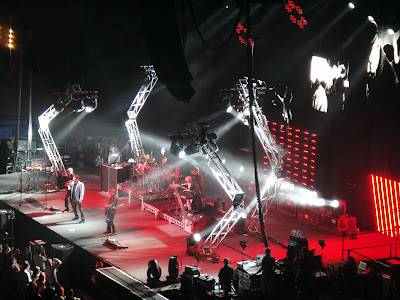 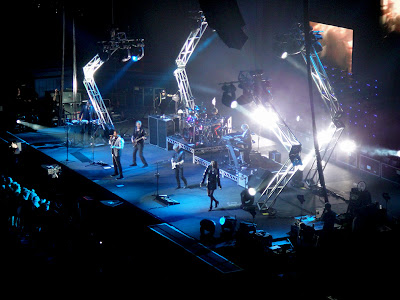 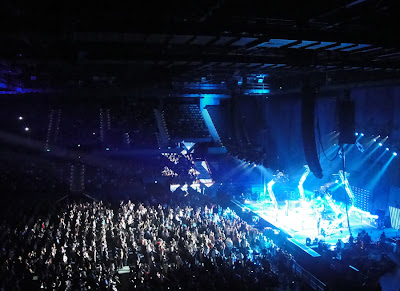 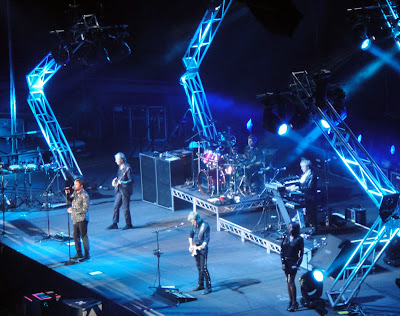 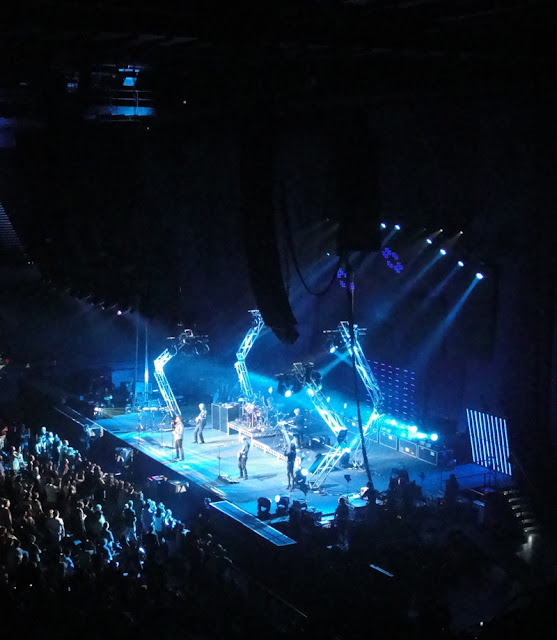 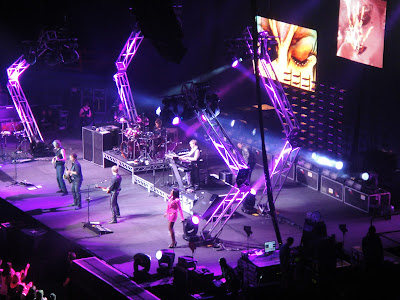 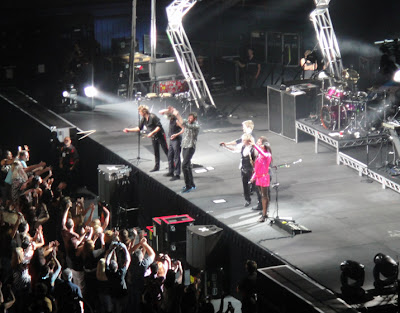 Amanda, perfect review of our boys but unfortunately John is allll mine! Sorry u were up the dodgy back as I WAS down the front just about licking John's nostrils. Your review certainely has summed everything up from last night. I have seen my boys a few times now and Simon's voice does not change! Glad you enjoyed just as much as i did and always do,Could barely get to sleep afterwards! great review!