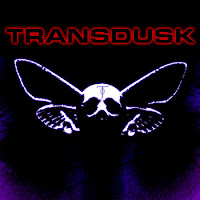 US musician T.S. Moth - the force behind Transdusk - has discussed with me many times how he wants to move to the American Southwest. You see, Moth yearns for heat and sun like a lizard baking on a rock, but he lives in New England.

However, it is precisely the richly historic backbone of the New England area that has inspired his creative output: the works of both Edgar Allan Poe and H.P. Lovecraft – alongside the lugubriousness of the Salem witch trials – provide Moth with strong lyrical concepts.

Moth’s need to create is a constant companion; he carries a pen and paper with him everywhere to capture varied forms of inspiration.

“I would say that's the main driving force behind anything I do: facilitating my ability to create,” he says.

“What begets that spark to actually make something after the initial ‘I need to create’ impulse is where I would say the expression part comes in.”

From an artistic perspective, horror and neo-noir films of the late '90s like Lost Highway and U-Turn served as the perfect escape from Moth’s mundane experience of growing up in the suburbs. With film being such a large influence, Moth couldn’t help but be affected by soundtracks.

“An alternate drive for me, or at least a goal, is to score a movie and/or have a song or two on a soundtrack.”

When it comes to art and expression, Moth flows toward the ‘anything goes’ school of thinking, but there are a couple topics he steers clear of.

“First one is relationships. My teen years are over and so is the angst that tends to go with it, for the most part.

“Second is anything extremely topical. I hate it when I love a song or album, but as soon as the event or people it's mentioning become irrelevant or are no longer an issue, it's hard to listen to them earnestly.

“Biggest culprit here (in my eyes) is Ministry for the ‘Bush bash’ trilogy. Without getting into politics I'll just say I'm VERY liberal. That and I love those three albums musically and that blaring them at the time was cathartic as all hell. But because they're so focused on Bush, they feel dated.

"I'd rather an artist talk about the larger issues presented by topical events. The most powerful and enduring protest songs are the ones that address the issues rather than the people or events.”

“Tommy Victor of Prong's guitar work has forever been the base off which I have modelled my guitar tone and, to an extent, riff writing (Rude Awakening is one of my top 10 favourite albums of all-time). Drew Neumann, who composed the soundtrack for the Aeon Flux TV series, instilled a deep love of texture-play and strange tonal arrangements in me. Gary Numan...is just fucking awesome.”

Moth finds the work of David Lynch to be a major force of creative spurring.

“Sound is always a major component of his work, especially when it's sound you don't necessarily know you're hearing. Lynch also works on that level visually; he throws a lot in that sticks with you, whether you notice it immediately or not. I've always admired and strived for that, to say something or present something that won't be picked up on until later. Or to disturb people in an indirect way.”

But it’s Moth’s mention of the artist H.R. Giger's work where I see the inspiration is the most powerful: Giger’s mix of base, dark wantonness with automatonlike forms expresses, to me, Moth’s music in the most succinct way possible. If you follow Moth on Twitter, you will know he is quite a sensual individual. As he sees it, good sex - he stresses 'good' over 'bad' - epitomises the qualities he values in life: communication, passion, physicality and expression.

I ask Moth - tongue in cheek - if he finds anything other than good or bad sex eases or hinders the creative process for him.

“When I started writing my own songs, I used to always start with drums, which made sense as I started my journey as a musician on drums,” he says.

“As I took up new instruments they each had their turn being the first thing I went to until, finally, I found myself using them all in equal measure. I've always tried to write more to the song than to any particular instrument, which is probably the reason I've always sort of hated guitar solos. Most of the time, I just think there’s something better that could be done.”

Moth finds vocals to be the most challenging aspect of the process.

“I’ve always been pretty shy, which never worked since I love the spotlight. So, if anything, Transdusk has been my own personal development tool.

“As I've recorded vocals for this album, and now as I practice for the live shows, I've become increasingly more confident as a whole and that's about as exciting as it gets.”

As Moth prepares to launch Transdusk and the fruits of his labor upon the gig-going public, he discusses with me the live set-up of his band.

“I originally wanted to do the whole old-school Ministry set-up: two drummers, two key players, two guitarists, one bass player, me, and maybe guests,” he says.

“Since then, I've scaled back...a lot. I started trying to make a four piece (guitar player, bass player, drummer, me singing and occasionally providing auxiliary guitar with backing tracks) but I haven't been able to find a guitar player who wants to or can play in the drop A tuning I use.

“So now it's me on guitar and vocals, my bass player Kris (who provided the guest vocals on Cadaver Junky), my drummer Charlie, and my iPod for the backing tracks/clicks."

Moth says rehearsals are well underway, with Transdusk set to make their debut on 20 October in Revere, Massachusetts.

I ask Moth, on a final note, what he hopes to achieve from the music industry and his place in it.

“Happiness. As cheesy as that sounds, it's true. I hope that if anyone gets ANYTHING from my creative output, it's at least joy. What better is there to receive?”

On 13 July 2012 Moth released his debut, self-titled album under the project name Transdusk. The album’s disquieting songs are performed at a frenetic pace, Moth’s guttural spoken tones a form of punctuation eventuating in a demonic explosion of chorus. This is particularly evident in Deathblow Automatic. On Disappear, I can hear a bit of Rammstein and even Slipknot in the influence department, although Moth’s sound is entirely his own.

I can’t wait to see the live incarnation of this music. My prediction is something wild could eventuate.

Explore the world of Transdusk and its creator even further by visiting http://www.transdusk.com/