How To Destroy Angels : An Omen_EP 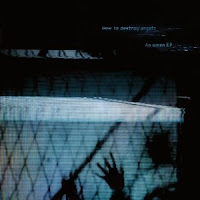 It was inevitable that whatever Trent Reznor released under the How To Destroy Angels banner would be compared to his epic achievements to date with Nine Inch Nails.

I would advise that you forget about Nine Inch Nails. That history is not going to help you to like An Omen_EP. However, that history may help you to understand it.

The Twitter conversation about An Omen - because, let's face it, I can't be bothered typing '_EP' after the album name because it seems a tad pretentious - has been torn. Literally. Fans have been emotionally conflicted between accepting this 'new direction' from Trent Reznor, likening it to Massive Attack, or downright despising it. I'm taking a more measured approach.

To me, this album was a natural progression.

While Year Zero was a powerful and rather brilliant concept album, we all knew that once the awards started coming for his film score, Reznor would embrace the ambient. Not that he hasn't before.

He has also married and - if I can believe the music media - is now the father of two children to former West Indian Girl vocalist Mariqueen Maandig. I imagine his life has changed somewhat.

As consumers of his music, I suppose what I'm saying is you'd have to be daft to expect the same anger and impact from Reznor's music these days.

Add to the mix the inclusion of producer/programmer Atticus Ross and art director Rob "I'm still not sure what he does in the band besides take photos" Sheridan, and it's bound to be at least interesting.

I like the single Keep it together, for which you can find the video at the end of this post. It contains the glitchy electronic elements we've come to expect from Reznor but is anaesthetised by Maandig's smooth and rather hypnotic vocals. It sounds sparse, but probably isn't.

Ice age is a little more difficult to appreciate, sounding like it would fit better in the mid '70s American folk rock scene than on an album related in some way to Reznor. The plunky instrumentation isn't pleasurable to listen to and is, actually, jarring in a bad way after listening to the former song. One might say...and I will...that this song is not very good. In fact, rather bad.

On the wing has the electronic sounds we've come to expect from Reznor combined with Laurie Anderson-esque processing on the vocals. This, combined with sampled strings and Maandig-on-Reznor harmonies, actually creates an interesting fusion. Disconcertingly, the melody of the song reminds me a little too much of the '70s Johnny Nash hit single I can see clearly now. Probably not intentional.

The sleep of reason produces monsters. My, we are trying to be all avant garde, aren't we. This song simply sends me to sleep. It's taking minimalism to the extreme and I'm reminded of the $5 meditation CDs my massage therapist uses.

The loop closes takes us back to the initial experimentation of the late '70s when it comes to using industrial sounds and Kraftwerk-like beeps. Insofar as noise for noise's sake, it's alright. If you're expecting a well crafted song from a musician who has been in the industry since the early '80s, you might be disappointed. It's a bit clunky.

Speaking in tongues (please be better than the last song...) combines tin drums with badly performed Indian-sounding instrumentation. Whispered, Satanic-like chanting enters the mix and...well...it sounds like music for people on acid. Very early '70s in influence. It IS interesting. At least it's better than a couple other songs on the album. It's not my cup of tea at all. If I want to listen to music like this, I'll listen to The Beatles during their drug experimentation days.

All in all, I wouldn't waste my money buying this effort. It's fairly mediocre bordering on bad and I know of unknown musicians with more talent in their little finger. But I suppose this is what happens when you're successful and you have nothing to lose: you try something different. What I don't think NIN fans expected was something quite this 'different'. And by different, I mean strange and a bit unnerving and not very pleasant to listen to on any level.

But that is just my opinion. And noticing the vinyl edition has already sold out, I wonder if anyone cares anymore about the quality of what Reznor produces, as long as they own it.

How to destroy angels: Keep it together from How To Destroy Angels on Vimeo.

If you're so inclined, you can buy it here: http://store.destroyangels.com/

Love this EP. Can't wait to pick it up on vinyl. The vibe should be perfect for that format.