Missy Higgins - If you tell me yours, I'll tell you mine (DVD) 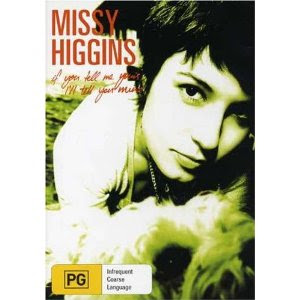 It could seem premature to release her bio as a DVD documentary, but the result is extremely important in our efforts to understand her evolution as a singer songwriter. This documentary shows how Missy Higgins’ personal growth has occurred over a very short period of time and makes you wonder what she will be like as she gets older. It is easy to understand why fans are so curious about her life when you listen to her intensely personal lyrics.

This DVD, If You Tell Me Yours, I’ll Tell You Mine, is a combination of documentary footage of Higgins, both on the road and from her childhood, and interviews. Some aspects show her expressing near melancholy about her success and the rapidity of her personal growth. When she says, “you’ll never get that innocence back that you had, you know, when you were a kid writing songs for no-one but yourself”, you see the sadness in her eyes for a time when she was just a kid mucking around with her piano for the hell of it. Her inspiration for writing, those lyrics with which so many fans can connect emotionally, comes when she is feeling introverted and seeks to express her feelings through words on paper, which she says is a therapeutic process.

A resounding element of this documentary is her discomfort with the enormity of her achievements and popularity.

“I don’t know the secret to being successful, so I don’t know how to keep doing it…sometimes you wonder why you do any of it [music] if it’s not doing anyone any good.”

Charity performances make it worthwhile to her and she is interested in exploring ‘big picture’ issues. She has been involved in performances for numerous charities and earlier in her career entertained the troops in Timor. She loves the connection she feels with the audience and how performing can be both a painful and happy experience due to the emotion it creates inside her.

An interesting aside, and one more suited to a psychology forum than to one dedicated to music, is her claim that positive and negative feedback do not affect her, as they are directed at Missy Higgins the brand name and not at her personally. Throughout the DVD, it is evident she uses Missy Higgins as a performance persona these days rather than connecting her achievements with her personal self, which she claims is nothing more than a survival instinct.

It is great to see someone succeed who has been dedicated to music for so long. Missy began playing the piano at six-years old and the guitar at 12. She claims that, as a border at her private girls’ school, she had numerous weekends to spend doing nothing but writing and playing the piano in the music room. Footage from her school days shows a wiry, pretty girl with a great gutsy voice, outshining all of her peers in the music stakes. Her early experiences as a singer in her older brother’s jazz band comes across as the most influential aspect of her musical growth; you can still see the jazz influence in her life performance style.

After winning the Triple J Unearthed competition she convinced her new manager to allow her time off to travel and write. This resulted in her backpacking around Europe as a rite of passage, her transition from school to adulthood. Missy says that she gained great perspective from her travels, that everything became clear to her when she removed herself from the place she’d been all her life. She says that sitting on the mountainside in Switzerland made her realise she wasn’t, after all, the centre of the universe.

When recording at The House of Blues Studio in Los Angeles, Missy was hounded by the sound engineers about her strong Australian accent, which she says she exaggerated just to annoy them. “Americans have basically said it would really help if [I’d] move to America”, she says, however Missy considers herself a Melbourne girl through and through and cannot imagine living in the United States on a full-time basis.

While some aspects of this documentary are almost a tad embarrassing, showing her tendency toward self-centredness and adolescent egomania, you cannot help but be drawn into her hopes for the world and for herself. She says toward the end of the documentary that self fulfilment is now more important to her than fame and that for each new album she will explore different avenues of her creative mind. She wants nothing more than to grow, progress and to “save [her] little corner of the world”.

The DVD includes bonus features in the form of videos for Greed For Your Love, Scar (including behind the scenes footage), Ten Days, The Special Two, and The Sound of White. I found particularly impressive the MTV Special Concert Performance which shows Missy in her element: performing live and connecting with the crowd. Missy Higgins is a formidable talent who displays emotional vulnerability in everything she says and does. It will be interesting to watch her grow as a musician and songwriter and to see the results in another documentary 20 years from now.