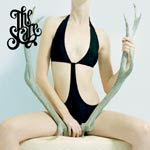 At this time of copy-cat bands who wear their influences as an outer skin, The Scare is an intriguing band that almost defies description. The band proclaims themselves to be apathetic to “the conventional, the blandness of society” and they are certainly no homogenised entity. Even the graphic design of their cover art - of this and their former release – makes a challenging statement with a mixture of traditional commercial appeal and an element of the bizarre.

Influences from Robert Smith and The Cure to Phil Judd (ex-Split Enz) circa Schnell Fenster, to many bands from the late ‘80s alternative music scene, sneak in here and there, without the listener realising. There is a sense of being caught in the midst of a macabre theatre show when listening to their release, Vacuum Irony. Their nouveau punk-gothic-new wave-grunge style is unpredictable, wonderfully so.

The first song, Cry Junkies, has a military drum-beat, the jolting rhythm ensuring uber dance-worthiness. It screams memories of different bands from the early ‘90s…but it is impossible to pinpoint the exact genres or musicians. Their influences are refracted by shattered mirrors into a thousand barbed-wire ropes, wrapping around you until you forget everything else and are just absorbed by their individual sound.

The second song, If I’m Choking Make A Scene, is musically like new-wave on speed, with a screaming, angry vocal opposed by a sweet melodic guitar. The next song, Cigarettes and Birth Control, has more broad-range appeal, with its gentler approach and Johnny Marr-style guitar. This song holds glimpses of Echo and The Bunnymen and early U2. In fact, the angst of this release is reminiscent of the passion evident in many early U2 releases, when the band was considered more punk than pop. Irony returns to the passionate vocals and a more ‘90s grunge sound, with hints of Sonic Youth. The release closes with the song Sand. Bones. Angels. Coins., an angst-driven anthem with a rhythm obsession similar to that of The Creatures.

Vacuum Irony is the second release from The Scare, six lanky guys from Queensland who, despite only forming in 2004, have made an indelible imprint on the Australian music scene. This is interesting music, not easily described and not for everybody. It is not easily digested and might require a specific palate to thoroughly enjoy. This is experimental music the way it ought to be, with little care for mass commercial appeal.