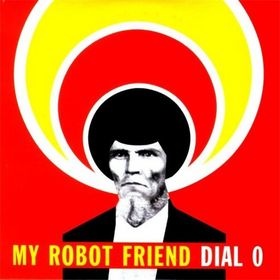 The Soma Records website describes My Robot Friend's album, Dial 0, as a "hyper electro-pop opus that plays out like a party jukebox for the 21st century" and likens it to Devo, Talking Heads, and Kraftwerk. Consisting of New York electronic artist, Howard Robot, My Robot Friend has opened for the Scissor Sisters and Le Tigre and his live multimedia shows are apparently something to be seen. Okay, so there is the record company hype, but what is the album really like?

"23 Minutes in Brussels", the opening track, wakes me up with a throbbing dance beat. Okay, it's late at night and I'm half asleep...so making my arse shake is an achievement! The xylophone effects are grin inducing and create the feeling of sunshine on my skin after swimming in the ocean all day. Lying on the sand, smile across my mug. Yes, very feel-good vibes in this song.

Third track and I'm already impressed. An artist who lives up to the hype?? Incredible. "The Good Part" shows muted guitar moods a la Depeche Mode. "One More Try" features vocals by Antony Hegarty from Antony and the Johnsons and sounds disturbingly similar to songs by '80s band Yazoo. While very accessible, this song is not one of my favourites.

"Rapture" is an interesting remake of Blondie's classic hit, replacing Deborah Harry's vocals with machine-like voices, the lyrics sounding as though spoken by mechanised, global corporation answering machines. Some additional lyrics make a scathing comment on current pop culture. "Electric Pants" features classical guitarist Jay Kauffman and is an ode "to the bizarre act of wearing electric pants" and what it means to be human in a troubled world: "The world that I live in is like an ambulance".

This is a very clever album, lyrically and musically, and just maybe lives up to the hype. Now, I'd like to see My Robot Friend's live performance...