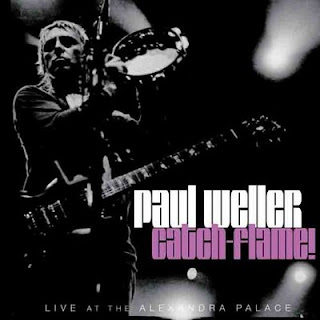 Paul Weller - known for his involvement with The Jam and The Style Council —must be one of the coolest customers in the music industry. The man has style, panache and flashes of musical brilliance. In mod terms, he’s a ‘face’, yeah? From ‘A Town called Malice’ to ‘Shout to the Top’, everything this man touched in the ‘70s and ‘80s turned to sold.

However this album – Catch-Flame! Live at the Alexandra Palace - is on first listen, well, dominantly mediocre. Recorded live at Alexandra Palace in December 2005, disc one chugs out the blues with monotony until a brief moment of inspiration with the song ‘Peacock Suit’...which unfortunately seems to run out of energy toward the end. The musicians supporting Weller simply seem to be lacking in enthusiasm and skill to make the song really fly.

Aha, now here is the Weller I love! Voice crisp and sharp like a knife, he spits out the lyrics to ‘From the Floorboards Up’. The soul man arises from beneath the designer threads to infuse ‘The Changingman’ with enough spirit to give me goosebumps.

Unfortunately, Weller seems mostly weary of the songs he’s performing. It’s tedious to listen to the first disc, and I’m afraid I can’t say anything more than that.

On the second disc, the standout songs are the beautiful ‘You Do Something to Me”, and the poignant ’The Pebble and the Boy’. The crowd goes wild when Weller strums the opening chords to ‘That’s Entertainment’, but I was secretly hoping these old Jam songs wouldn’t appear here, because the originals were so sharp and angry. However, the Style Council songs come across well, with ‘Shout to the Top’ packing more punch than it originally did. Lastly, ‘A Town called Malice’ predictably gets the crowd excited again—it’s one of my favourite songs – and encouraging the crowd to sing the chorus while he takes a break creates a feel-good sensation. This is pretty good actually, and I might even have gone to this gig for this song alone.

I despise it when people criticise musicians who had their ‘heyday’ decades ago, because it is like saying someone will never be as beautiful as they were when they were young; it’s a void point. People can never be the same as they were, but their spirit can still be imbued with positive qualities. So I will say, I’m glad Weller is still performing and writing, but I’m sure a dvd version of this recording would be much better, just to see the gig. The crowd sounds enthusiastic, so maybe something’s missing in the translation. Because there’s live, and then there’s LIVE, and I like my gigs a little edgier than this. However, the second disc alone may well be worth the price of entry. Like all gigs, the second set is the best.