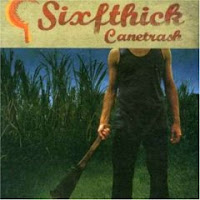 When buying this album, I was wishing that thousands, nay millions, of others would do the same thing. Because it’s about time this band got some prime time recognition for being the best at what they do: incendiary rollicking musical rides that rip off girls’ panties and give young men chest hair.OK, so maybe not ALL panties are ripped off by these guys; mine remain firmly in place despite many Sixfthick gigs over the years. The band has a fierce and primal tongue stuck in cheek which makes them adored by many across the globe. I was just talking last night to someone in Italy who loves their music and I have friends across the world who want to see the band purely from my gushing descriptions.

However, live performances and albums are two different species and often the live vibe essence is not captured in a recording. In the case of Sixfthick’s latest release, “Canetrash”, this is not the case. While the energy and fire is still there, the recording captures a maturity of lyric and musicianship previously unseen by this writer in their previous albums. The theme of “Canetrash” seems much more cohesive and the vocals are evocative.

This line-up is the best to date, supporting the high voltage vocal duo of brothers Ben and Geoff Corbett. The combination of Dan Baebler on guitar, Tony Giacca on bass, and the inimitable ‘Fred’ on drums (you have to hear him sing the golden shower song at one of their gigs to believe it!) is a tour de force of unrelenting erotic energy pulsing from their instruments to your ears. If this sounds rude, you should get used to it, because Sixfthick really takes no prisoners when it comes to blatant sexuality. In their live gigs, the sight of two bare chested Corbetts writhing on stage – and more often than not, off stage – is almost enough to make a girl lose consciousness.

Other standout tracks on the album include “Magnets”, “Nervous Ticks”, ”Payday for Peewee”, and “Post Powder Blues”. “Magnets” is a flip-off to ex-lovers around the world, the vocals screaming and hollering pain away, daring it to return. Most can relate to the lyrics, “Little magnets to silence the critiques of my conscience”; I think using magnets as a metaphor for clearing your mind of past failures in the same way they wipe cassettes is very clever. Then again, I’m obsessed with great lyrics and I know you want to hear more about the music, right?

Most of the album is true to Sixfthick form: raucous rockabilly inspired-rocking-punk-psycho-swampland. In other words, this band is incredibly difficult to define, which is a great feature I believe, especially when many bands sound the same. They stand out from the crowd, even in a crowd as superb as the current batch of Australian bands releasing the best music I’ve heard in years.

“Payday for Peewee” takes a step back, and it is in this state it becomes obvious how talented this band is. Even with the pounding energy stripped away in a slower song like this, the band excels. The vocals on this song are sublime, enthralling…more powerful with the vulnerability that is permitted to come through. Sounding a little like The Stranglers, this song is my personal favourite. The music is laidback and chilled, yet reminiscent of a caged panther licking its lips, deciding whether or not to pounce. It touches a deeper part of me than other songs on the album. It reaches inside and grabs your imagination as if a magical storyteller.

Not enough superlatives can be used for this album. In “Canetrash”, Sixfthick has accomplished the best album of their 10 year career. If you haven’t seen this band perform, do it now, because they really are the best live act I’ve seen in my life, on a par with an Iggy Pop gig I experienced in the late ‘80s. They bring new meaning to the term ‘audience interaction’! “Canetrash” is a must-have album for your collection because it embodies a period of music at the moment that is creative and experimental and crazy.

Sixfthick is really the personification of the word ‘energy’: wild, untamed and ready to make your ears bleed…a little pain with pleasure never goes astray.