Bullet for my Valentine - The Poison Live at Brixton (DVD) 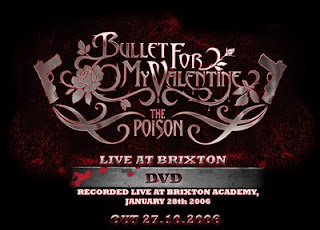 Once in a while, a band comes along that delivers an original, musically profound live performance such as the world has never witnessed. The kind of performance that inspires you to start a band, to take up guitar. Music that makes you want to stand up for something you believe in, to make love, to create great art.

I love it when that happens, when a live performance can sweep me up in a flight of ecstacy, inspire original thought.

Firstly, I bought The Poison. I paid good money for an album that, seriously, had one redeeming song on it that didn't sound like every other song on the album ("Tears Don't Fall", for the record). My mistake. So there was a time, once, when the charms of Bullet for My Valentine were not totally lost on me.

This live performance has some redeeming aspects. I love black and red colour schemes and the Frank Miller-esque designs used in BFMV merch. Superficially, the band has everything going for it that a record label marketing machine could desire. But wait, shouldn't this be about the music?

I worked out the formula for this kind of music: scream vox -- pause -- triple kick drum -- chord progression -- melodic vox. Combine with a spoonfull of '80s metal band posturing, hair windmills, flying V guitars, finger-tapping (palm muting disenabled due to wearing of fingerless woolen glove as fashion accessory)...and you have EMO. The songs all sound the same, a blur of noise. No light or dark, no dynamics; just formulaic, cash-cow, crowd-pleasing fodder. Which brings me to the fans.

Average age: 15. Uniform: black jeans, black t-shirt, Converse, GHD-straightened black and red hair, black leather wristband. Okay, so it DOES sound like me circa 1986...AND? That just goes to show how much is regurgitated. Horned fists punch the air, faux angst, mobile screen displays replace ciggie lighters. Tattoos a fashion statement. These fans ADORE BFMV...and according to the female fans, Matt is mightly do-able. But again...what about the music?

The 'on the road' aspect of this DVD shows a group of young men in awe of their own popularity (in my opinion, too inexperienced to be warranted), their lush tour bus the product of a very confident recording company's budget. The band members boast, like schoolkids, their drinking prowess and drunken hijinks: "I drank so much...I passed out standing up in the sink...I was just knocking it back...there's been a lot of drinking, partying, passing out...". Sounds like the night after the senior 'prom' / formal / root-fest, right?

Pointing at the contents of their tour bus bar fridge the quote, "Red Bull gives you cunt", spills from the lips of a band member. I hope he's not referring to groupie sex considering the age of most BFMV fans...(my friend has decided this quote will be his Christmas card greeting for 2007).

During the gig, Matt shows his limited ability to use a thesaurus when addressing the fans:

"You're beautiful fucking people!".
"Are you ready to fucking rock?".

When referring to the fans, he says, "Without them, we're fucking nothing".