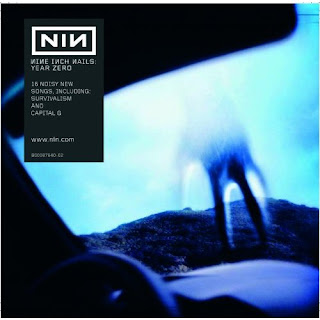 First thing this morning I rushed out to buy a copy of this highly anticipated release from Nine Inch Nails.

I have read much about the marketing hype surrounding Year Zero, such as the usb keys, found on the floor of Nine Inch Nails concert venues, containing urls of conspiracy sites created especially for the album. I have also seen fan comments online hailing this as alternately their favourite NIN album or a complete disappointment. I was excited to listen to it, more excited than I have been about any album in a long time.

Year Zero is incredible; I've never heard music so simultaneously heavy, funky, sparse. It sounds a little more restrained than previous Nine Inch Nails albums, but at the same time the intensity is increased. The drums funk out and the vocals are his best in years. His use of bit crushing compresses the sounds, so it seems the music is struggling to reach the listener, like a message from another universe. Erratic filtering on the guitar, which cuts out certain frequencies of sound, gives the guitar the effect of nails scraped down a blackboard.

All I can think of at the moment is what a task it's going to be for Alessandro Cortini, the keyboard player/programmer on tour with Nine Inch Nails at present, to fully reproduce the sounds on this album live!

There is a foreboding element in the feel of this music; a soul survivor calling out on a radio frequency for help, a shadow of insanity on tracks like The Greater Good. Nine Inch Nails' concept of this album -- resistance -- is felt strongly. The lyrics are extremely political; Reznor's lyrics have previously been more introspective, and here he attacks the process of repression by the government, oppression of the self.

I'm not sure why, but when I listen to the lyrics on Year Zero, I can't help thinking about how shocked I was when New Orleans was flooded and the US government took so long to help. I wondered how swiftly the action would have been to save people, re-house people, if the majority of residents were white...or affluent whites. I may be reading too much or too little into what was meant by the album, but much of it seems to be about human potential and how the government and social structures and racism and religious intolerance work insidiously each day to turn us against each other. To limit our potential as human beings because we are so caught up in the hype, the simulacrum of a life, as Baudrillard alluded to. We live each day in a shell, our outer shell created to protect us from the mediocrity that is everyday existence. Who are we really, inside? And if we fight back, if we resist the distractions such as mass consumerism and political rhetoric and media constructed moral panic...what could we make the world become?

As dark as this album might appear, it is really full of hope. Instead of crawling on our knees we should find the strength inside ourselves and fight against that which is destroying the world, our lives, each other.

The story behind this album is fairly intricate -- you really need to read the various websites to understand the concept -- so when I mention the drug Parepin, you may or may not understand what I'm referring to. Let's just say that my personal angst concerning the drugging of a nation -- the trend for doctors to casually prescribe Prozac and Zoloft and other drugs that suppress people's anger at the world, the drugging of children with supposed ADHD -- is reflected in Reznor's concept. The drugging 'dumbing' down of the world so its inhabitants don't realise how much their governments are screwing them over. It's all here.

This is an album to listen to lying on the floor in the dark, so you catch the subtleties. The album is conceptual, so in this case resist the urge to download only the singles from iTunes. You need to hear it in its entirety; Reznor has really considered the ebb and flow of this album and the songs build in intensity and then subside, like resistance and submission.

An album that exceeds the hype, Nine Inch Nails' Year Zero is a complex and brilliant work.