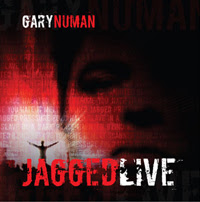 The first act opens in a red-lit auditorium; black-attired fans’ hands can be seen ebbing and flowing above their heads in the shadows. A haunting middle-eastern-sounding synth creates an aura of mystery, of sensuality: not the Gary Numan of ‘Cars’ fame.

Numan’s all grown up and this sense of theatre – of the genuinely dramatic – is what he’s aspired to achieve with his live performances since his musical journey began back in 1979. The crowd is composited of fans whose vintage dates them as original ‘Numanoids’, while some younger faces are dotted throughout.

One by one, the band members are introduced by a beam of cold, blue light, enveloping them from above as if encased in ice. These colours are to theme the performance throughout: the sex of red and black, the sterility of blue and white. (And epileptics be warned: strobe effects are used throughout this production.)

The grittier synth sound of Ade Orange (recently replaced by Ade Fenton) is punctuated by the drums of Richard Beasley, like mechanical animals roaming the deserted streets of a post-apocalyptic cityscape. “Here is my small black box filled with hurt sent by you”. As Numan sings these opening lines to ‘Pressure’, it’s amazing to hear how spot-on his vocals are, as they are on the album. The quality of his voice has always astounded me, such is its originality. Numan looks incredible and seems more comfortable performing than ever before. Donned in black, with bondage buckles adorning his trousers and black kohl rimming his eyes, he more closely resembles a young goth than a 49 year-old father of three small children. Makes me wonder how he dresses when playing with them at home.

This song is fantastically chiaroscuro: there are lots of peaks and troughs of sound, which is typical of the Jagged album. This allows guitarist, Steve Harris, to leap about the stage like a pogo dancer during the peaks, when the guitar emphasises the grit of these moments. Wait...do I see Numan headbanging? He really seems to be into the moment, which is uplifting to see; he’s spent too much of his career being riddled with self-doubt. His enjoyment of the performance is evident and the fans are loving it.

Distortion opens ‘Fold’, made atmospheric by orchestral synths. Orange and fellow keyboard player David Brooks work seamlessly to complement each other’s performance. The left of the stage gets a workout, with Harris leaping like a cricket on speed and Numan front-centre, but I can’t help pitying the right side of the crowd due to the lack of bass player. Rob Holliday, now playing guitar for Marilyn Manson (near miss on bass due to Jeordie White’s return to the Manson family) was not available for this performance. From a live perspective – although I’m aware Numan’s performed sans bass previously – it just creates a groove no synth can replicate. (I know this comment will have its detractors, but I think there’s much to be said for the human fallibility factor of a musician playing live versus a sequencer.)

Beasley creates a driving, industrial-bellydancer groove and the band launches into ‘Slave’, one of this writer’s favourite songs from Jagged. The verse grooves lead less dramatically into the soaring chorus: less light and shade and more constant energy. This is the standout dance track in the performance so far. The angle of the cameras have been remiss in showing much footage of Brooks, focussing mostly on the left of the stage, which fails to capture the complete band vibe.

‘In a Dark Place’ is actually found lacking in a live performance. Of course, the chorus is exceptionally magnificent in its grandiosity, but Harris appears bored during the more atmospheric moments. It would be interesting for Numan to incorporate a middle-eastern string instrument in this newer music, as it could potentially provide subtle interest in these low-key moments.

Harris finally gets his groove on in ‘Haunted’ and Brooks comes forward to play bass while Orange and the computers take care of the synths. ‘Haunted’ is my favourite song from the album due to its ballsy feel. Numan swaggers across the stage, connecting with the audience, exuding his charisma. He certainly has that indefinable ‘it’ factor. This song wakes the fans up from their dark musings and the performance is enlivened. This DVD would have benefited from a bit more attention on the fans’ faces: close-ups of their enjoyment, showing their interaction with Numan.

When ‘Blind’ starts up, I wonder how Numan comes up with some of these sounds; akin to building equipment beavering into the Earth or soldiers marching. This technical aspect always mystifies me: I think a music technology magazine should interview Numan on his style and effects, if they haven’t done so recently. It’s a pity Holliday couldn’t be a part of this, as Brooks’ bass playing makes the music and the band presence toughen up. (A harder approach is what I’d like to hear from Numan: I know he has it in him.)

‘Before you Hate It’ is another rockier track which, in the chorus particularly, would have me gyrating in the crowd like a hula doll, but Numanoids won’t have any of this. They appear to stand stock-still, staring intensely, unmovable which, if you’re a musician and not in the genre of Enya, is not something you want. While Numan and the band pour their energy out, the crowd absorbs it. There’s no apparent give and take and I’m left with the feeling the band, and Numan, deserve more.

“Sometimes I wonder if God laughs at me” and ‘Melt’ sways into the auditorium. Numan’s vocals soar to new heights during this track and the distortion in the music and acoustic quality in the guitar in the still moments creates a heart and body for this track: an improvement on the recording.

Ade Fenton joins the band on keys during ‘Scanner’, and his influence is immediately heard. Fenton, who co-produced Jagged with Numan, is a young musician who, despite preferring production over performance, has recently replaced Orange in the live line-up. I see this could help Numan’s work to become ‘dirtier’, which I perceive as a positive move. Orange fans may well disagree. Harris brings such energy to this line-up: I hope he continues to perform with Numan for some time. Fenton is also very engaging on the keys, and Numan appears to be energised by these more aggressive band members.

The menacing whispers in ‘Jagged’ sound like a song by Massive Attack: dark atmospheric, haunting, on the edge of sanity. The live performance of this track is exceptional and finally enlivens the crowd. Looking at the sheer quantity of people at this performance, it’s incredible to conceive of the loyalty of Numan fans. They have stuck with Numan through thick and thin and I have a feeling the best is yet to come.

The DVD has a special features section, an interview with Numan being one of these. Always self-deprecating and far too modest, this interview provides an intimate perspective on the shy alter-ego to Numan’s sensual on-stage persona. The features section also contains an amusing ‘behind the scenes’ of the making of the music video for ‘In a Dark Place’ that leaves me wondering if all English musicians whine so bitterly about the cold while sipping tea from china mugs. Numan’s wife, Gemma, makes an appearance here as the make-shift make-up artist for the band, as the video was shot on location in Numan’s back yard. Even his dogs run around as usual, showing the film crew who’s boss. It’s fascinating to see how certain visual effects are achieved in the editing process and how bands feel about lip synching in the outdoors in winter!

This DVD is an excellent addition to Numan fans’ collections and would be the best place for new fans to encourage their Numan adoration. Regardless of the brilliance of old Numan tracks, such as ‘Machman’, ‘Are Friends Electric?’, and ‘Down in the Park’, his last few albums have portrayed a more confident, less cocky, musician with depth and intensity. I honestly believe Numan is at the peak of his creativity now and that he has more to offer the music community and fans than his reputation from the ‘80s would have us believe.

This DVD was reviewed for The Dwarf.

Exceptional review for an exceptional performer. Thanks for visiting my blog. I'll be back here to visit when time permits.