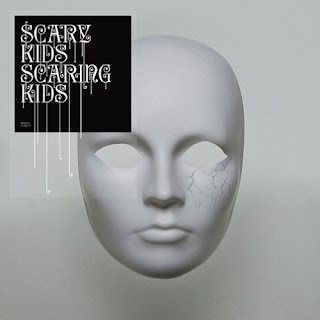 You may have heard Scary Kids Scaring Kids’ single, Faces, from their new self-titled album. I’m trying to write an unbiased review of this album because I think that, beneath the emo/post-hardcore facade, this band may actually have potential for longevity in the industry. Due to the intense music media saturation of this genre, sadly I’m more than a little over it already and the inevitably formulaic results of bands within it.

Hailing from Gilbert, Arizona, Scary Kids Scaring Kids was formed during the members’ junior year of high school. After financing their own debut EP, After Dark, they pursued their music full-time until they scored a spot supporting Bullet for My Valentine on the 2005 Warped Tour.

Despite positive reactions to their 2006 full-length debut, The City Sleeps in Flames, the band has great expectations for this new album. Produced by Don Gilmore ( Linkin Park, Good Charlotte ), Scary Kids Scaring Kids is an achievement for a band that spent most of the past year on the road, including participating in the 2008 Soundwave Festival.

“I think we really had time to make this album sound exactly the way we wanted to and focus on every track individually,” explains keyboardist Pouyan Afkary.

“In the past, we’ve been so limited with time, but with this disc we could really focus on the small details that made a big difference to us.

“[This album] is all about reaching deep within and pulling out who you truly are,” continues Afkary.

“With these songs we really tried to vocalise the beauty of being an individual and speaking out for the things you believe in without fear – and I think that’s a constant theme throughout the album as well as something that’s important in our day-to-day lives.”

The passion felt by the band for their craft is evident, the vocals powerful and musicianship inspired. There’s enough metal in here for old-school big hair and spandex fans, with diversity more akin to Linkin Park than Bullet for My Valentine, who I unpopularly dislike with a passion.

From cock-rock to ballads, the album certainly shows a range of musical abilities. The skill on show makes me hope the band chooses a different producer for their next album, someone who can further enhance these qualities. On Star Crossed and Watch me Bleed, vocalist Tyson Stevens displays a sensitivity of attack, and the song Derailed is positively ethereal, the band playing with ambience and sound.

On Snake Devil, the band does an excellent Whitesnake impersonation, kicking back and having a good ol’ boy time. At times like this, when they let go, the music seems more energetic and appealing, less self-consciously trying to fit into a genre. The atmospheric The Power of Resolution, for example, really shows the band’s range – revealing a hint of their future potential.