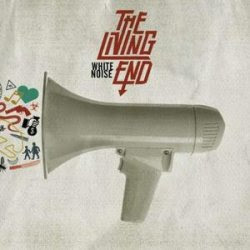 Ah, a lyric sheet. I can't count the number of albums I've received to review that haven't had one. I immediately start to think the band has nothing important to say, since they're hesitant to put their words down on paper. But The Living End is one band that's never had that problem.

White Noise is the most consistently brilliant collection of songs The Living End has released to date. Chris Cheney's morphing guitar style has unleashed a new aspect of the band, lending contrast to the persistent rockabilly stylings the band has displayed in the past. I actually believe Cheney has become a bit of a guitar god here.

The lyrics on this album are highly relevant to how I've been feeling for a while now and I know the songs will resonate with many people in the world who appreciate actual opinions from their musicians instead of songs about lip gloss or sexy backs. War, intolerance, apathy, it's all here. I appreciate albums with a bit of intelligence, and this does the trick. It's like comparing a Cosmopolitan to a tequila slammer, the New Beetle to the original VW...I'm sure you understand.

By now you've probably heard the single, White Noise, which although quite downright fab, isn't the best song on the album. There's nothing worse than buying an album that doesn't live up to the single and this album, thankfully, is chock full 'o' goodness. Think the passion of the Clash, the style of the Jam, a teaspoon of Stray Cats mixed in there for a laugh, and a dash of screeching Bon Scott thrown in for good measure. It's one tasty dish.

Make the Call and Loaded Gun are the 'knife to my throat-have to choose' favourites. Make the Call is like nothing I have heard before from The Living End: lots of squealing guitar noise, very ACDC, more determined than ever. I like it when bands surprise me, and this album does.

And the goodness isn't just in the sounds. The lyrics to Loaded Gun highlight the implications of police-states, a phenomenon like something from 1984 come about throughout the world as a result of Machiavellian political maneuvering occurring in defence of 'freedom':

And the police report said

We had no choice left
We did what we were forced to do
He was sweating it out
With a back pack on
Who knows what he might have done
We did the only thing that
We know how to do.

The band channels Bob Marley (buy the album if you don't believe me!) in the track Sum of Us:

And now that I've given some comments on the album, I will digress for a moment. In May 2006, I was fortunate enough to see my first Living End gig at the Brisbane Convention Centre. Although I'd been a fan since they arrived on the Australian music scene in the late '90s, I'd somehow managed to miss every performance they'd given. So it was following the release of the single Wake Up that I popped my TLE-cherry.

I was blown away by the community of fans and their devotion to the band. Very few poseurs, just people who love good music and appreciate drive and passion. Cheney was a standout guitarist and Owen and Strachan delivered the libidinous cat's meow rhythm for which the band is renowned. Catnip, anybody?

So not only is White Noise an incredible creation, but you MUST NOT miss seeing the band perform on their forthcoming tour. It really raises their music to another level and you just might take it home as the best live band experience of your life.

Sometimes, bands/musicians/models-come-actors-come-vocalists et al ad infinitum ad nauseum sell a lot of albums based on image and popularity (or commercial endorsements), but obviously lack the talent. I wonder why the music consumer puts them there in the first place. However, The Living End sells albums because they have talent, passion, determination, and a spirit that forces you to take an interest in what's happening in the world. And I'm glad they're here to do it because frankly, the music industry needs a kick in the arse at the moment and so do we.