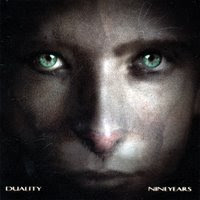 Nine Years is the project of Italian musician Maximilien Zaganelli, who is currently based in Milan. His album Duality, released in 2008, weaves a trance-like web around the listener, merging from trip hop beats to backdrops for tales of exotic seduction.

It begins with the track Free is your Mind, a gently grooving song with sublime vocals of the Farinelli kind and a tabla drum that entices your body to move. Along with Fire start purify my life, there are definite elements of Gary Numan circa Exile, Massive Attack, and Depeche Mode in the music of Nine Years. This is continued in Correre, which closely resembles Massive Attack’s Inertia Creeps from Mezzanine.

The songs Guardian of the Past, Follow the Light, and Egypthian G embody a gentle romantic feel, with finger picking on the guitar setting a Mediterranean vibe. The falsetto backing vocals add to this ethereal sound. In some ways, these songs remind me a little of Mike Patton's Lovage project.

Building electronic minds is reminiscent of a gentler form of the Prodigy’s Smack my bitch up; a punchier dance club track in comparison to the rest of the album. What could enhance this track is heavier bass and drum tracks in the mix; it could benefit from sounding a little nastier!

Overall, there’s a consistent, gentle groove winding its way through this album. This lends itself to being the album you’d like to listen to while winding down with a drink, watching the sun set on some crystal clear ocean. It will be interesting to hear which direction Nine Years heads in the future: whether down the path of gentle trip hop or into more experimental territory. I am hoping for the latter.