The nail that sticks out...

Like the apple in my favourite fictional work, the iPhone app has been held up to artists as the ultimate temptation: a way to personalise content to their fan bases through a mobile communication device.

Fans have been following the tedious process of Apple's approval process of the Nine Inch Nails (NIN) app via Trent Reznor's regular Twitter updates. A company that can't provide a delivery date for a service promised to a client, and continually misses deadlines? Sounds a tad unprofessional and a bit like the plumber down the street who tells me he'll be around some time soon to do the work, whenever he's free, but can't give an actual date or time. Then again, the plumber isn't listed at number 4 on Lovemarks top 200 list of 'lovemarks'. [For the uninitiated, a 'lovemark' is an advertising term for a product that retains a fanatically loyal customer base.]

The latest installment comes as quite a surprise. In a response to NIN admin, Apple said:

"Thank you for submitting nin: access to the App Store. We've reviewed nin: access and determined that we cannot post this version of your iPhone application to the App Store at this time because it contains objectionable content which is in violation of Section 3.3.12 from the iPhone SDK Agreement which states:

"Applications must not contain any obscene, pornographic, offensive or defamatory content or materials of any kind (text, graphics, images, photographs, etc.), or other content or materials that in Apple's reasonable judgement may be found objectionable by iPhone or iPod touch users."

The objectionable content referenced in this email is "The Downward Spiral". Since the app is live on the App store, please make the necessary changes to the application as soon as possible, and resubmit your binary to iTunes Connect. Thank you."

So, let me get this straight. A couple of weeks prior, Apple approved the baby shaker app, which they then had to remove due to public outcry after it had been on sale for several days. Yet, they won't approve content targeted at NIN fans due to some rude words in a NIN song? Do they not realise that the only people likely to download a NIN app would be NIN fans, quite used to the lyrical content of Reznor's music?

There would seem to be quite a reasonable solution to all of this: only make adult content (or in this case, adult lyrical content) available to adults. If someone clicks on a check box saying they're over 18, they can download it. This would then significantly decrease Apple's liability. Not having an iPhone, I have no idea how these things work. Please feel free to indulge me with the ins and outs, although even a simple explanation would probably bore me to death.

Why would a company even enter into negotiations with an artist, knowing some of the artist's lyrics contain explicit words, if they have a strict censorship policy? Oh sorry, I mean the "iPhone SDK Agreement". Seems a tad on the daft side. Are they so out of touch with the music industry that they aren't aware of music that's been around for 20 years?

Reznor is outspoken in his appreciation of Apple products; I believe these are unpaid, voluntary endorsements. Due to the quantity of his fans, I believe he has single-handedly inspired some people to purchase iPhones by promising an app. Apple would be foolish to provoke the ire of this massive fan base. With the power of the Twitter, these days it only takes a second to let thousands of people know exactly what you think about a product or a company.

The bone of contention I hold with this entire matter lies with the branding of Apple. It is in no doubt that their advertising and products are targeted toward consumers in the creative industries: artists, designers, musicians. Aren't these people the ones who are expected to push boundaries and challenge existing norms of society? To be blunt, aren't these the people who sometimes write lyrics that challenge sensibilities or might contain lewd words? Aren't artists people who sometimes paint naked bodies to confront society about its double standards?

How very MySpace Arts and Culture of Apple to censor a NIN app. When MySpace decided to promote artists through a specialised profile, they failed to realise how hypocritical it might seem that in order to publish artwork on MySpace, it needs to be censored i.e. no nips, bums or fannies. Oh, and especially no knobs. MySpace Arts and Culture is "a place for artists", as they say, but only those artists who homogenise their artwork...which they have to do even if they upload their art to a private profile and don't allow under 18s to have access. All in a day's work for Big Brother. Conform or be destroyed.

I have a bit of a thing for old ads, especially the silly propaganda ads from WWII or the 50s. I found an obviously doctored one the other day, but it suits the content of this post: "The nail that sticks out gets hammered down". In this case, it's a NIN getting hammered by an Apple, but it's all the same. There's no place for censorship in the creative arts, and there never will be. Apple, of all companies, should understand this, otherwise, we can simply assume their entire marketing campaign targeted at creatives and the concept of 'individualism' is a load of bollocks. ["Surely", you cry, "no marketing could be complete rubbish?" But yes, perhaps it is just all hype.] 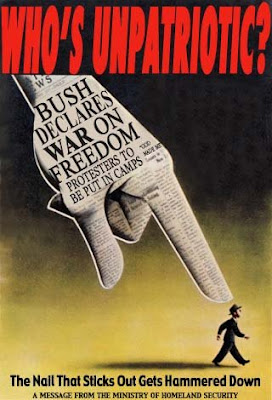