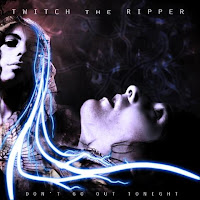 I've been watching these guys on MySpace for a while now, and their sound has always interested me. It's intriguing to find a band early on, listen to their music develop and become more refined. This EP, Don't Go Out Tonight, by Connecticut band Twitch the Ripper was worth waiting for.

From the first track, 'Fade', Lonn's drumming strikes me as complex; consideration has been given to make the percussion layered and almost predatory in feel. Some beautiful vocal harmonies by Jon Dobyns elevate this track while maintaining a consistent dance-floor appeal. 'Strip' screams "SINGLE!", a throbbing tribal beat accentuating the blatant sexuality in the vocals. This track has a more popular construct than the rest of the EP and I believe would be eaten up by angst-ridden music fans. Probably mostly female in gender, if you've noticed the appearance of the Twitch boys...

'Thirst' begins with a Gary Numanesque synth line creating a dark and erotic atmosphere. Much of the sauciness throughout the songs is the result of Dobyns' voice, which is quite alluring and gently androgynous. This track's composition is reminiscent of a Martin Gore / Depeche Mode song, with similar melodic lines and structure interspersed with simple, twinkling guitars. The most sublime track on offer; dreamlike and rapturous. 'Under the Cover' is an interestingly constructed song, with elements so diverse as to appeal to the listener on vastly different emotive levels. Its trance-like keys melt into guitars in the genre of early Cure, however the style is indefinable. Quite brilliant.

So many upcoming bands lately are all about the looks and little about the music. It horrifies me when I get an album to review if the haircuts in the promo pics are too spot-on; usually indicates little aural substance. It's nice when the package is complete and the music delivers; there's something to be said for a band doing it the hard way, unsigned to a major label. This EP has pleasantly surprised me and just makes me wonder how Twitch will evolve in the future. Maybe after some time performing their songs live, some of the smoother edges will roughen up a little, becoming more dangerous. I can't wait to hear these guys in a few years, because I definitely think they're on to something. I highly recommend this EP...that means buy it!