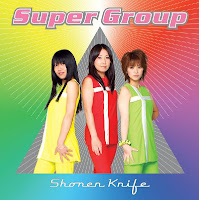 Shonen Knife is one of those bands people seem to love or hate. An all-girl Japanese group formed in 1981 and influenced heavily by the Ramones, their career has been lengthy and has influenced musicians from Nirvana to Sonic Youth. Sure, the vocals are a bit off-key at times and no, the music isn't hyper-inventive or anything really new. But the girls have a vibe that brings back memories of a simpler time: part '60s, part punk, part Japanese surfer girl.

On their new album, Super Group, all the songs have a similar construct and feel, so it would be pointless writing a track by track dialogue. However, for comparison, if you interbred The Ramones and The Shangri-Las, you'd get this sound. Part wailing banshee-little girl lost-hormonal adolescent boy...that's the vocals in a nutshell for you.

The track 'Muddy Bubbles Hell' has a slightly dark vibe and musically, seems reminiscent of Australian '80s bands like The Stems, who had a penchant for the '60s jangling guitars of bands like The Chocolate Watchband; '60s garage music.

'Deer Biscuits' (yes, lyrically the songs are like something from a bad trip) is a Shonen Knife tribute to country and western. Oh yes, you thought it couldn't get more bizarre; this is only track four, and already my mind is a little messed up. With lyrics like "Deer, deer, deer biscuits, smells like soy bean flour"...can you understand why I'm feeling a little bent?

"Let's have a BBQ party, it's a sunny day, let's have a BBQ party, under cherry trees", followed by something about carrots, marshmallows, and juicy meat, then "Don't worry about your diet". "Butterflys are dancing, little birds are singing...". Look, I've always wanted to be critical about this band because frankly, the singing's terrible in parts and the music's been done before...but I can't. The girls have so much spunk and the songs are so innocently cute and jaunty that I have to love them. Oops! So much for my sordid reputation as an uber critic. So I'd say that means 'BBQ Party' is my favourite track on the album, yes.

(I don't have a reputation, by the way, for being an uber critic...sadly, I'm not as mean as Lester Bangs used to be, which does sometimes make for more interesting reading, I know. I'm just honest.)

Their cover of Wings' 'Jet' is even endearing; could be the accent...The girls rock out on the guitar solo, and the sound they achieve is that wonderful, dirty, gritty, Detroit grunt a la The Stooges.

Although released in November 2008, for some reason Super Group was only now sent to The Dwarf for review. Better late than never, and if you're a rabid Shonen Knife fan, you probably have the album already. This offering, overall, gives me the impression that three Japanese Sandra Dee's stumbled upon a garage full of guitars and drums and performed the surfer-dude scene of a Gidget film; you know, the scene where all the cool surfer kids are doing the twist in capri pants, tied gingham tops and pigtails? EXACTLY like that.

For a band that has been around now for 28 years, unbelievably Shonen Knife sound current in this era of everything old is new again. And seriously, I can't think of a better compliment for music of the early '80s, that its raw innocence and energy is still relevant. So if you've never heard these girls before, and you like the sound of what you've read, go out and discover them. You'll be the third generation to do so and you won't regret it.

Listen to Shonen Knife on MySpace.

I'm no expert on Bangs, but I'm pretty sure his big thing the appreciation of the sound, the purity of the inspiration. As you know, he started out on jazz and moved toward rock (because everything is a gateway drug toward something else!) And like you, he valued concept albums, and albums in their entirety - not just looking at one corner of the painting. (With the exception of a few tracks, one of them and endless decline into darkness by Nico)

He was also, near as I can tell, repulsed by characters - rock stars who'd *become* their act. See: Bowie, Stones, Lou Reed.

Not a fan of Shonen Knife,