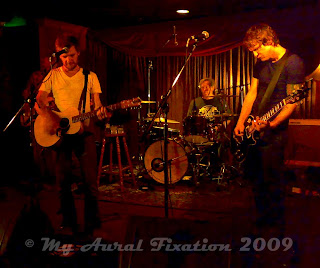 The Troubadour in Brisbane is easily my favourite intimate live music venue. It's cosy with a nice colour scheme, has a red tassled frame around the stage with persian rugs on the wall, and faux antlers are mounted around the place, casting demonic shadows on the walls. It's a bohemian den of iniquity meets "Rawhide", and that sensibility suits me perfectly.

I first saw Nick Barker as I was entering the premises. As I walked up the stairs, he sprinted down them, a youthful vision in white t-shirt, jeans, and sneakers, with a short spiky 'do'. This is a far reach from the long-haired, black jeaned, winkle-pickle wearing swampy rocker I recall from copious gigs in the '80s with his band Nick Barker and The Reptiles. I like the change. He looks healthy, fit and happy these days, which can only be a positive thing.

The support bands had almost ended. As I'd not been feeling the best all day, I'd opted to turn up just before Nick's performance which, I know, isn't the best way to operate but, when you're feeling dodgy, it's sometimes all you can do. There was a decent crowd for The Troub and, while the audience predominantly consisted of people around my age who probably had some curiosity about the new Nick versus '80s Nick, there were a good number of younger punters sporting that '60s fashion vibe. It's always good to see new fans of musicians who've been around for a while; I like - and encourage - that. I add, though, that it's kind of weird seeing '60s revivalists in clubs when that was the 'alternative' look most popular when I was a teenager in the mid '80s. What comes around goes around, evidently, several times! 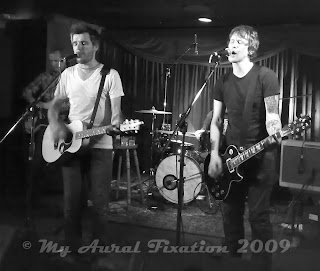 Nick's set kicked off sans guitarist Justin Garner (from South Poor), who was otherwise distracted at the bar. A quick call-out over the mic for him to get onstage saw the complete band present within seconds. I was most impressed by the burly drummer, Michael Barclay (Paul Kelly and The Messengers, W.P.A.), sporting a frangipani behind his ear; I often do the same in frangi season, but have never seen a man do it. The juxtaposition between manly man and delicate flower was hilarious. The bassist, Alan Brooker, needed no introduction to some older members of the audience due to his work with Paul Kelly and The Dots. Justin, now fully in the moment, impressed me with his spontaneity in style and gutsy backing vocals. Nick - even with his small electric acoustic which, he joked, made him feel slightly inadequate - is still a force to be reckoned with during live performances. He has lost none of his edge, but he now has a darker quality which lends more credibility to his music. He still swears a lot on stage, but it's in that Aussie bloke way where it's more of an adjective than abuse. Into the set, he calls out to 'Jonathan', asking him if he liked the restaurant he was eating at earlier, adding he couldn't forget 'that' moustache. Mid gig, 'James' rambles on to the rear of the stage, shirt off, beer in hand, rocking out to the gig. This character was pretty hilarious, so we made sure we got a shot of him.

The evening was filled with this old-school Australian pub vibe, a laidback and fun vibe I haven't felt at gigs for a while. There were even the dodgy drunk dancers at the front of the stage who, if I was on stage, I would find really distracting; I often don't know how the band stops themselves from laughing. That drunken side-step with the lurch where they almost fall over, but don't...gets me every time. 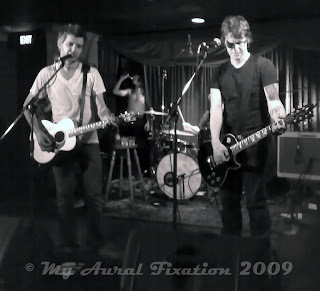 The music performed tonight was a mixture of music from Nick's new album, "Black Water Blues", music from bands he respects, and some older music from the rest of his career. Highlights from the evening were the songs "Where I Wanna Be", a gorgeous slower song which, on the album, features female backing vocals. In this case, the drummer performed backing vocals with the guitarist adding vocals toward the end. It still worked and tugged on my heart strings. "Sunny's Song", written for Nick's son about the break-up of his relationship with Sunny's Mum, was another showstopper. The set was vibrant and dynamic, the country vibe of the album taking a back seat to a rockier edge. When Nick returned to the stage for an encore, he pleased some of the older punters with a rendition of his '80s cover hit, "Come up and see me (make me smile)". However, my favourite song from that era was "Down Today" and I must admit, it made me RATHER happy to see Nick performing that after all these years with such an edge and gritty vocals.

Nick is performing more gigs around Australia later in November and throughout December, so check out his MySpace for details. His album can be bought online at Hired Goons or at one of his gigs.


Thanks to my man, Distaudio, for taking these photos for me with his phone cam when my point and shoot failed miserably due to lighting conditions and the desire to shoot without a flash.