The Basics @ The Zoo, Brisbane 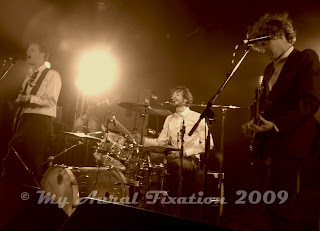 Okay, let's get the musician bias out of the way first up. If you know about The Basics, chances are you heard of them through their association with Wally De Backer (Gotye). The Basics is the band Wally performed in prior to his solo success as Gotye. It would be wrong of anyone to believe that The Basics' music is anything like that of Gotye or that the other members of the band are any less significant than Wally. The Basics knocked my socks off on Thursday night at The Zoo, and I think they're an incredible bunch of talented people.

The band normally consists of Tim Heath (guitar, vocals) - sadly sans moustachio magnifico on Thursday but looking 20 years younger, Kris Schroeder (bass, vocals), and Wally De Backer (drums, vocals, and bass drum case warmer). However, on Thursday evening, they were joined by Simon Imrei (guitars, percussion, vocals and keyboards), Dave Bramble - or, as he explained to me in the noisy confines of The Zoo, "bramble, like in Enid Blyton stories" (keyboard, tamborine, backing vocals), and two amazing sax players: Gideon Brazil (who has played in the Gotye mini orchestra) and Jake Mason (who also plays in Cookin' On Three Burners). The sound was much fuller than I recall from their earlier music, which contained a pared back '60s vibe. Their new album, "Keep your friends close", has elements from many musical forces working together to create a luscious, sensual sound, like being wrapped in velvet while simultaneously enduring a mild beating.

Absolute standout performances of the night go to several songs, one sung by each main member of The Basics. Wally's drumming on the song "Keep the door open" was mindblowingly phenomenal. His arms, like the extended limbs of an arachnid, flail seemingly randomly while creating a beat so powerful and overwhelming I was transfixed to the spot, as if absorbed by a voodoo ritual. Of course, the multi-talented pixie sang flawlessly for that song as well, as if his body weren't already exerting itself to its full potential on drums.

Kris channeled Eric Burdon while singing the song "The Executioner", a dark and sultry piece with reggae undertones. The band's sound is more than a sum of its influences; the overall effect is this exquisite blending of diverse eras in music - motown, The Animals, Johnny Cash, and The Specials - with an element that makes them sound unlike any other band. Their music makes you dance, makes you think, makes your heart race and your body shake. Their onstage presence is alarmingly innocent at first: their white business shirts and grey trousers make them resemble a bunch of high school kids, all freshly shorn and boyish. Then the onstage dirty jokes begin, the predatory glances, the blues guitar, the tribal beats, and you know these guys are more than they appear to be.

Tim's raw vocals on "Trouble in his head" were astoundingly atmospheric. The song's lyrical content is well crafted and it resonated with me as one of the night's 'moments'. The audience, still as stones lying on a cold, wintry beach, stood transfixed by both the beauty of the moment, the perfection of the song, and the emotive quality of Tim's voice. Except one girl, who just wouldn't be quiet and seemed quite oblivious to the fact that other people had paid to hear the people on the stage, not listen to her (you know who you are, with your dark pigtails, white dress, and whining voice.)...but even she couldn't ruin the moment. If I had to categorise the three Basics into singing styles, Wally is Sting, Kris is Burdon, and Tim is Cash, the blues man, with a voice containing more edge than the others'.

The vocal harmonies in "The No. 1 cause of death amongst youth today" were spotless and, when the band performed the single from their new album, "With this ship", the entire audience sang along enthusiastically. Tim's telecaster guitar offers a compressed and subtle sound, yet provides an undulating overlay to the music.

At the beginning of the gig, it took a while for the Thursday night crowd to warm up (and in some cases, to shut up ;), but once they did the house was rockin'. When The Basics returned to the stage for an encore, they performed songs from their back catalogue, including a couple of songs from "Stand out/fit in", "For girls like you", and "Get back".

The Basics are a live performance force of nature, both primitive and nuanced. The balance of energies between members onstage is near perfect. I absolutely loved their show and will definitely catch them next time they make it to Bris town.

For further information on The Basics, visit their website at http://www.thebasics.com.au. There, you will find links to their MySpace, Facebook, YouTube, and where to buy all of their wonderful EPs and albums.

The Basics performed at The Zoo on Thursday 12 November 2009.

This review was written for The Dwarf and will also be published on their website.