Mr Meeble and the 'M' word 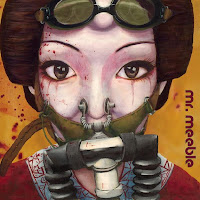 Since I first heard it discussed en masse at The Big Sound Summit last year, I've noticed many conflicting viewpoints about the 'M' word in the music industry: marketing. Current opinion among experts is that marketing music these days must include some aspect of online engagement and promotion; to not be online, marketing oneself for 90 per cent of the day, is tantamount to career suicide. The other camp claims it's far more important to be writing music and performing than fiddling around with a multitude of online accounts.

It seems to me that the problem isn't people spending too much or too little time online marketing themselves, it's that many people don't fully understand yet how to utilise the resources at their disposal to maximise the time they DO have to self-promote. I'm talking about bands who aren't signed to major labels, musicians who are their own accountants, PR machines, and booking agents. To many indie bands, marketing either comes naturally, or it's the monster in the room that nobody wants to talk about.

Although I freelance in media/marketing/communications for my day job, I'm no expert on what works best for musicians when they're faced with marketing themselves in their own spare time. I thought I'd be perceptive and pay attention to some independent musicians who seem to be doing something right, so hopefully I can learn from them and, in turn, you can too. This interview is the first in what I hope to be an ongoing series in which I present case studies of how working musicians are going about getting their name and music 'out there'.

An American band named Mr Meeble first came to my attention on MySpace because of their amazing music. However, it was from reading their tweets that I became interested in an aspect of them besides their music: how they used various online tools to promote their music. I thought it would make for an interesting read - especially if you're a musician wondering where to start with marketing - so I had a chat with Mr Meeble's producer/songwriter/programmer/vocalist Devin Fleenor to find out more.

At the time of writing, Mr Meeble's Twitter page has 14,854 followers and their MySpace has 26,198 friends. In current terms of measuring online popularity, they're doing quite well for an independent, unsigned band. And that's not all: they also have their own website and profiles on Facebook, YouTube, Last.fm, Friend Feed, Blip.fm, iTunes, Amazon, CD Baby, iLike, and Vimeo. That's a lot of websites to be constantly updating and monitoring. I ask Devin if, when the band first started out, they established simultaneous identities on all these sites, or if it was a more ad hoc, progressive development of an online band identity.

"It is, like most things, a gradual process," he said.

I wonder, how does a band decide which online spaces to inhabit and is it essential to take different approaches to how you engage with fans on each of these?

"I basically go where I think our fans will be. It's basic marketing: who are your fans? Where do they congregate? I try to be open and genuine no matter what, so that means spending time interacting with fans. You build a fan base one person at a time."

"I think you have to be yourself. Anything else is a waste of time. If you are a real person and somewhat interesting and likeable, people will pay attention. It's pretty simple, actually."

I ask Devin how he markets a band whose music isn't mainstream.

"Being independent is about being creative, efficient, tenacious, and crafty. You have to determine your demographic and systematically approach those fans. The crafty part is figuring out how to approach people without turning them off or annoying them. I happen to have a natural ability for that."

I mention the extent of the band's popularity on Twitter and ask how long it has taken for the band to get to this point.

"Who knows how long Twitter will be the hip, new, social darling. I can already feel the momentum dropping off. However, I am just more tenacious and dedicated than most independent artists out there."

Many musicians spend a lot of time pondering their logos, band names, band photos, what wallpaper to have as their Twitter background, etc. How important does Mr Meeble think this aspect is of marketing a band?

"It's a very difficult thing to do. I'm not sure we have much of a brand identity for Mr Meeble. We don't have a logo or even a good band picture. I think it's much more important to make amazing and compelling art."

"I spend two hours a day on marketing. Blain [bandmate] and I look after all the visual imagery together; that's more time consuming than anything."

Two hours a day on marketing seems like a lot of time when you consider many musicians also work full-time. How does Devin juggle his music and these marketing commitments?

"I roll with the momentum. I'll work on marketing for 12 hours straight, then spend two days entirely on music. It is a balancing act, just like life. I'm not necessarily the most balanced person; I probably spend too much time on the marketing."

I have watched several Meeble videos and they've always impressed me. I ask Devin if he has any guidance on making music videos inexpensively and on how to create amazing atmospheres at shows (their live set up, as seen in one video, is sublime and very effective).

"Not sure I have any great advice, except to pursue excellence from A to Z. Yes, it is expensive. And yes, it takes amazing amounts of work to prepare for an epic show or video shoot. You have to learn how to take on and conquer monumental challenges one way or another."

What marketing techniques does Mr Meeble use to gather and maintain fan contact details?

"We have an official mailing list at meeble.com, but that is something I need to work out a little better. I'd like to combine our blog and mailing list so they become one. We have run contests before, but we need to do more of that kind of thing. You can give me a C on my report card in this department!"

What stream provides the band with the most revenue at this stage?

"Live shows pay the best, but we haven't been playing enough of them. Once we release our second album, the plan is to play a tonne of shows."

What's Devin's opinion about giving music away in exchange for email addresses, and generally about marketing concepts involving giving the music to fans for free?

"I think anything that builds your loyal fan base is a great idea. Exposure and interaction are more important than short-term profits."


If Devin could give bands or musicians who've written some songs and want to start promoting themselves one piece of advice, what would it be?

"Be professional. Be personal. Be tenacious. And don't look for your big break. Instead, work hard and build on the little breaks that come your way."

Hopefully this chat with Devin has provided you with some ideas for how indie bands can use online tools to promote their music and build fan bases. I think it's one of the important considerations to discuss with bandmates at the start of any band: who will do the marketing and, if nobody in the band is so inclined, is it worth outsourcing this to a freelance PR firm or marketing guru. Or do you really need the support that an indie label can provide? Overall, I think it's important to point out that one size doesn't fit all: marketing your music has to work for you and for your fans. The next time you hear an online social marketing expert throwing advice around, listen to it, but only take on board the advice that feels right for you.

It's an interesting aspect, in this modern world, to being an artist. Not sure that back in Mozart's day musicians had to do much more than write music, perform it, and snuggle up to wealthy patrons. In 2010, musicians need to do so much more just to be heard amongst the throng of an over-populated industry. But something I think you can take away from this interview with Devin is the importance of remaining true to yourself and writing amazing music. In the end, as a reviewer, I believe that the quality of the music speaks volumes louder than any schmick promo photo ever could. It's just how to get it heard that's the hard part.

If you're an unsigned musician and you've achieved some great success with online engagement and promotion, or with building fan communities, I'd love to hear from you. Hit me up on Twitter @myauralfixation. I'm especially interested in concepts that have involved a bit of risk-taking or that consist of something a bit different to the norm.