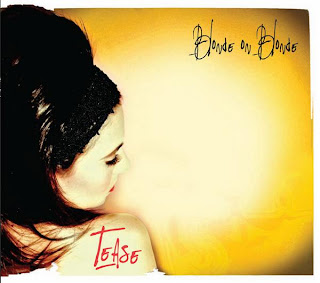 Every so often online social networking sites allow you the opportunity to literally stumble upon a musical gem from your own home town who, possibly, you should've known about already. Such is the case with Blonde on Blonde.

I was on Twitter and saw a profile pic for one Jack Bratt, followed the MySpace band link on his profile, and discovered Blonde on Blonde, a Brisbane band which I had never heard of before. Their sound is something wonderful, an amalgamation of the old and the new. I contacted the band on MySpace and they sent me their EP, "Tease", for review. Apparently, they've been giving the EP away for free! Crazy kids.

"Tease" entertains the art of seduction from the get-go with an alluring EP cover photo and packaging. And that's just the beginning. Monsieur Bratt's vocals are lazily sexual, reminding me of a less androgynous Courtney Taylor Taylor (The Dandy Warhols). In fact, that's the band Blonde on Blonde sounds most like, with their blend of '60s hep-cat cool and hedonist boheme pace. Their music reminds me of bits of early Stones tossed with Velvet Underground dressed with T-Rex. Part glam, part psychedelic, compressed by the laidback attitude that comes from certain indulgences, it packs a punch while maintaining an underlying sense of sensuality a la Cowboy Junkies. Yet, it has balls, like Queens of the Stone Age.

The first track from their EP, "Oh My Oh My", is currently enjoying popularity on Triple J's Unearthed site. A catchy guitar riff and funky drum beat embeds this song in your brain and, when the boy/girl harmonies kick in, the song begins caressing you from the ears down. This is radio-friendly single material to the max. It even carries an element of early '90s Manchester music movement in its solid yet undulating grooves.

"Pretty and Wide Eyed" ramps it up a notch and in this track, Bratt's verse vocals are channeling Marilyn Manson. My favourite track from the EP, it dresses up in shiny black leather and lets the whip hang loosely by its side, with an occasional crack, threatening and teasing at once.

"Marlon Brando" moves into early '70s art rock sounds and the guitar tangents lightly scratch your brain to provide a juxtaposition to the solid harmonies. "Say Say Say" gets down and funky with throbbing bass and whacka whacka guitar, like some blaxploitation theme song meets Led Zep grunt. My second favourite song from the EP, this song would be wild live, and that's when I next want to hear this music. I HAVE to see this band perform, as their sound is something phenomenal. They make old sounds contemporary and quicken the pulse.

If you'd like to listen to Blonde on Blonde, request a copy of the EP, or check out where they're playing next, visit their MySpace.