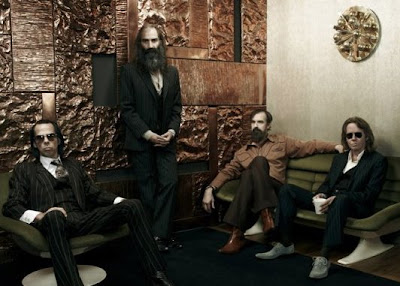 How do I even start writing a review of an out of body experience?

Let's start at the beginning.

Lining up outside ye olde Tivoli (in Brisbane, Australia), the prevalence of bogans drinking UDLs somewhat unnerved me. After all, I was queuing to see one Nick Cave, the godfather of Australian punk and goth. Lord Voldemort of the music world, if I may. (And I will continue momentarily with this Harry Potter reference...)

Once safely ensconced within the beautiful deco walls of The Tivoli - Brisbane's plush red carpeted, balconied, divine temptress of sound - I sent a text to my friend who was meant to meet me there. Seems she and her sister decided that the Jubilee Hotel down the road was an infinitely more inviting option versus seeing Grinderman's support. So I spent an unwise $6 on a plastic cup of shiraz, drank half, and left the other half for some poor alcoholic in need of sustenance to imbibe.

I managed to squeeze into the front row...albeit far left without a banister to lean on. Good vantage point for the support musician, who annihilated his guitar while presenting us with a terrific display of heartfelt songs performed with blues mastery, guts and soul. His name was Ed Kuepper. He was in this little band you might've heard of: The Saints.

Just before Grinderman came on stage, I managed to lose my prime position as down swept the sleazy, drunk, 50 year old men who - somehow managing to escape from their wives and kids for the night - decided to annoy / press up against women in the front row. I slid away and up into the small alcove at the bottom of the stairs and, surrounded by a bunch of 20 year old AFI fans resplendant in matching tattoos and lobe extenders, I awaited Grinderman.

Slithering on to the stage came what appeared to be ZZ Top headed by Professor Snape. Yes, here's my second Harry Potter analogy. I had memories of Nick Cave from gigs I had seen him perform in the '80s and one gig at the Big Day Out in the '90s some time ago. I remembered him as smooth and sexy. The man before me onstage last night was neither smooth nor sexy. You know how, when you watch Harry Potter films, you can't help but get an erotic charge from Alan Rickman's Professor Snape? Well, Cave carries that air: dark, dangerous, kind of creepy, a bit tormented...and he actually hisses. Dressed in black trousers, VERY shiny black shoes, and a collared shirt, he resembled the drunken bachelor uncle at a family wedding who, despite being an incredible sleaze, manages to woo all the bridesmaids with his hip thrusts and smooth talking. With his slicked black hair and frown, Nick embodied PRESENCE.

His three compadres - Martyn Casey, Warren Ellis, Jim Sclavunos - were three hairy bastards (hence the ZZ Top reference) clothed in brown op shop splendour. Martyn on bass was a smooth operator, all charisma and smoochy expressions to the ladies. I couldn't take my eyes off his abused bass, resplendant in scratches and marks just like a bass should be. The funk he brought to the house was sublime.

Sclavunos destroyed my hearing last night. Every time he beat that kick drum, the entire podium I was standing on shook, my body vibrated, and my brain pounded. What a groove master! He rode that drum kit last night like it was a horse of the apocalypse.

Ellis' beard is so damned long I think I actually saw a bird fly out of it at one stage. That man is a whirling dervish on stage. How many instruments did he play? Too many to note. Whether he was bashing high hats with maracas, wielding violin feedback in our faces, or shoving reverb down our throats, he was messing our shit up all night. On the floor. Flying through the air. Diving to the ground. Creepily grooving with pelvic thrusts. The man did not stay still to breathe. Scary and beautiful. Mad and divine. And no, he's not the Warren Ellis on Twitter (that's the writer).

The songs were brilliant. The lyrics downright amusing at times. Cave's wiry body flung from left to right, lurched into the crowd at every opportunity, and wreaked havoc on the mic stand and general stage set-up. (Kudos to the curly-haired guy to the right of stage whose job it was to fix whatever Cave had fucked up; he was onstage most of the night on his knees while we laughed at him...poor guy.) Singing about gingerbread men and biscuit tins and making it sound like he wants to fuck you from the inside out, Cave licked the faces of young men who looked like they really wanted it. He made grown women cry with a touch of his hand. I saw more than one hand reach up to touch his cock when he was leaning into the audience only for him to jerk away at the last minute. The tease. He said "I got sunburnt in Brisbane today. You can grab my arse, but you cannot grab my shoulders or my legs". I think the crowd obliged.

Cacophony. The sounds did not reach my ears, they brutally raped my ears and my body and ripped my insides out and twisted them around my throat until I could barely breathe. The wall of sound, the feedback, the growling, the howling, the leaping and the gyrating. It was like a voodoo ritual with a heart of funk and blues born from the Bayou mud.

There was laughter too. Plenty of it. Grinderman knows how to have fun together, how to push the crowd to its limit, how to create havoc onstage while mischievously grinning at each other throughout. It was like watching a secret society with the associated handshakes and winks and nods.

Next time I see Grinderman I will know what to expect and will not stand six feet from the wall of speakers. Lucky for me I was wearing earplugs but the AFI boys were trying to ram their fists in their ears most of the night, the noise was SO FUCKING LOUD AND CONSTANT AND PENETRATING.

If you are a Nick Cave fan, don't see Grinderman expecting anything dark and brooding; the Cave in Grinderman is a funky devil overlord with temptation in his hands and a frown upon his brow...but with the spirit of Dennis the Menace inside. Every so often you see peaks of it glimmering through the darkness and it's delightful to watch. Yet when he stands at that Korg and sings a ballad while staring into your soul, it's a moment you remember for a while. His black guitar might still be shiny, but I look forward to the day when it too shares the war wounds of Casey's bass.

I may feel violated by Grinderman but, while I lick my wounds, I remember the thrill and tremendous beauty...and the partial deafness slithers into oblivion.

Nicely said! (Except the Harry Potter bits...) I was up the front at the same gig also and was one of the people who got to touch him, and his ass! ;) Amazing, he is my idol!!