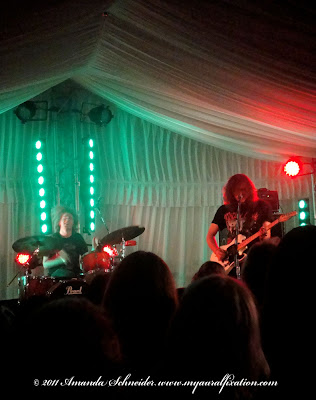 Last week, I attended Big Sound Live to check out some new music talent, along with swarms of industry folk and music fans. One of the bands that impressed me was local Brisbane duo DZ DEATHRAYS.

When I ask drummer Simon Ridley how DZ DEATHRAYS got on the Big Sound line-up, he tells me "we walked into their office, smashed our resume down on the director's desk and said, 'That's your line-up!'. I know he's probably being sarcastic, but this encapsulates the aura of casual acceptance these guys have about the attention they've been grabbing since Big Sound showcases were held.

Twitter and the music media alike have been abuzz raving about Simon and vocalist/guitarist Shane Parsons. In what seems to be a typical downplaying of this hype, Simon told me he thought their showcase went pretty well, "although I fucked up a few times, but no one threw anything at us".


When I was watching their gig in Bakery Lane (in the carpark behind the Doc shop, to locals in the know...Simon and I agree more parties should happen there) the crowd consisted of loads of girls thrashing down the front, boys with pretty hair holding back a bit, and music talent spotting folk all up the back drinking and checking their iPhones (of course). The girls were going a bit crazy over these two. I think from a music marketing perspective, they've got that mix of cuteness, attitude and being easygoing that makes industry types salivate.

There they were on stage, throwing this amazing music at us, with their big hair, lots of strobe lights and absolutely infectious grooves, and there seemed to be a 'bit' of onstage beer swilling. Yes, the duo enjoys a tipple, as I heard them discuss on 4ZZZ this afternoon, and this comes through in a few of Simon's responses. When I asked which bands he'd seen at Big Sound Live, he says "I saw Tiger Beams. They weren't really on the line-up, but they were my favourites. I didn't see that much as I was kinda doing a lot of bar work that night..."

Music is evidently the basis for a lot of fun for Simon and Shane. He says the duo is a party band, so "going out with friends and hazy memories" create the inspiration for their music. When he cites The Bronx, Nirvana, Death From Above 1979, Portishead and Massive Attack as favourites, I'm a bit surprised by his inclusion of the last two; frankly, I was expecting at least a nod to '80s hair metal. I find it fascinating to learn from musicians what music inspires the music they create. When asked to describe their music in five words, Simon says:

I'm sure they've played at a few too. It's obvious DZ DEATHRAYS has great local fan support, but Simon tells me Brisbane musicians also really support each other's bands, regardless of genre. I asked him what challenges have faced them so far, being located over here, away from the rest of the world.

"Australia is one of the most isolated continents in the world, so travelling is expensive.

"But that's kinda where being a two piece helps out, [although] it's very limiting musically as we can't just add in extra melodies on top of the others very easily.

"I guess we've just done everything we could to the best of our abilities, like working full-time jobs to pay for tours."

There are so many people out there in the industry telling young bands what they need to do, who they need to hire etc to succeed. I asked Simon for his take on this, for some advice for bands seeking to get their music known. Apart from telling me that deciding on a music career is "literally financial suicide, but a lot of fun", he says loyalty is an important aspect when working with others to promote your band.

"The most important thing I feel is picking the right people, so once you start working with them they will stay working with you from the bad days to the good (if there are good)."

Having just returned from a UK tour, I asked Simon how overseas audiences have responded to their manic brand of aural assault.

"The experiences have been amazing, as we've always dreamed of travelling and playing music," he says.

"As far as the reactions go, it's been really varied; we've played shows in New York to literally four people and then 400.

"In the UK, the response has been just incredible: we went over there with nothing and came back with label deals and an amazing booking agent...it kinda felt like a Disney movie."

I'm happy to say there's nothing very Disney about these two. They seem to be just a couple of cool guys who like a good time and love creating sounds that tell your body you'd better bloody dance/thrash/groove or else. Oh, and they don't mind blasting faces off either.

If you're interested in seeing what everyone is now talking about, they're playing at Brisbane's Alhambra Lounge this Saturday night (doors open at 8pm on 17 September). This'll be their last gig before they head off on a European tour in October in support of their EP's (Ruined My Life) release over there. After they're finished that, they'll then return to Australia to start on their debut album. Whew. I'm exhausted just writing that! I wish the band good luck, good fun and minimal hangovers.