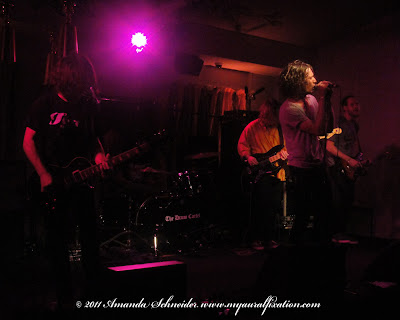 A month ago, I attended Big Sound Live, part of the Big Sound music conference held in Brisbane each year. It's a pretty hectic few nights where you run from venue to venue partially missing bands' showcases because another ran over time. You pick which bands you want to see because you've listened to one song of theirs featured on the Big Sound artists web page. Sometimes, it's hit or miss: what sounded great in a recording might not be indicative of a band that performs well, and vice versa.

Being a music blogger who doesn't listen to Triple J - I know, how can I live with myself etc - I wasn't intimately aware of the existing success of this stellar band named The Novocaines. I'd heard Cup of Coffee a couple of times before and accordingly followed them on Twitter. I had no idea they were Unearthed darlings, that they'd supported such international acts as Them Crooked Vultures ("When you meet/share the stage with Dave Grohl, John Paul Jones and Josh Homme on a random week night, it's pretty hard to top."), or that their single had appeared on the Scream 4 soundtrack. To me, they were just a band I thought had a great sound who I wanted to check out.

So I pretty much had an 'augasm' when I heard them play at Big Sound Live. Holy shit. What a condensed block of energy in one unit! Not only was their performance incredible, but I think they sound better live than recorded. I was blown away, took heaps of photos, felt infinitely sorry for anybody who missed the gig, and made it my life's mission to ensure nobody missed out on knowing who this amazing band is and what gets their juices flowing. With 2439 fans on Facebook, I suppose you could say I arrived at this party when everyone else was already drunk and I had some catching up to do.

The Novocaines are four guys from Northam in Western Australia. They take me back to that Saints punk ethos: musicians influenced by '60s music as well as the do-it-yourself post-disco aggression. They also bring some of the '90s grunge element of power rock - minus the spandex tights of the '80s - to their show. Perhaps a splash of Nirvana before Kurt completely fucked himself, back when they were raw and before shirtless football players loved them. Think Rape Me. Think Bleach. Add a touch of '60s Californian garage bands like The Chocolate Watchband, with their enamouring combination of 'fuck you' attitude and catchy songs, and you sort of have some idea of what The Novocaines are like when you see them perform onstage.

So, naturally, being impressed made me want to dive into their brains to get to the meat in the sandwich. I was fortunate enough to interview drummer Liam Young to get a sense of what drives The Novocaines and where they're headed.

The Novocaines formed in 2006 and consists of singer Corey Marriott, Jay Marriott on guitar, Steven Turnock on bass/baritone guitar, and Liam on drums. As mentioned before, they're from WA which, for those of you who don't live in Australia, is a long flight from the east coast where most of the gig opps happen. They met in highschool and from seeing each other around town, and Liam hooked up with the rest of the band in 2008. When asked to describe the band, Liam says they're just a bunch of "dudes hanging out and writing tunes".

"It's such a special thing to be able to find out about, listen to - whether it be live or on record - and share music with your friends," he says.

I ask Liam what sort of topics they like to write songs about.

"We nearly always write our own parts and Corey's the main lyricist, so it doesn't always turn out about the same thing to all of us. But main lyrical content is on bitches 'n' hoes."

When I manage to get a hold of Corey to ask him if he agrees, he adds "I tend to write about a reflection of epiphany moments and try to reinterpret it into feeling, as I feel it is the most honest relection of who I have been, and who I am becoming."

Glad I clarified that one! 'Bitches'n'hoes' wasn't exactly the gist of what I got from their lyrics when I saw them ;)

The band finds they're heavily inspired by listening to records.

"It's a wonderful feeling to discover a band or musician who gives you something you haven't felt in a while," says Liam.

Some of his favourites from recent album purchases include: The Flaming Lips - Embryonic; Toro Y Moi - Underneath The Pine; Fucked Up - David Comes To Life; Battles - Gloss Drop; and  Frenzal Rhomb's newbie, Smoko at the Pet Food Factory.

So how did it feel when Triple J Unearthed got behind Cup of Coffee and what did that do for their career?

"It really kicked things off for us so, of course, it was an awesome thing to be a part of at our age."

The band's single was included on the Scream 4 soundtrack when Riptide, a US production company, gave The Novocaines that and many other great TV slots. Liam says that "they like us and we like them for that". It's a bit of a mystery how the band ended up on the Big Sound Live line-up, as Liam says he just got a text saying they'd be playing and that was that. The mysteries of band management :) 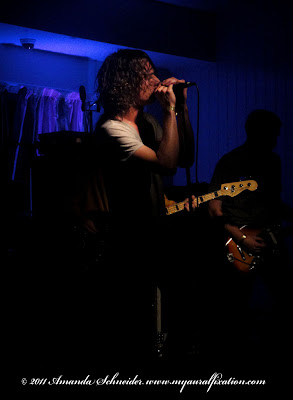 I ask Liam how he thought their Big Sound Live showcase went, as they really blew people's minds despite having some bad foldback problems.

"It's always great to hear positive reactions to our show, media and punters alike," he says.

"We had fun. It's a struggle to balance the show(case) when crap like that ain't going your way, but we tend to get over it pretty quick. I'm not the guy to be storming around backstage and pissing off other bands. Life's too short."

Liam managed to catch some other bands at Big Sound Live and says "Redcoats were tight as hell - really awesome stoner grooves. Also the Laurels were one of the best shoegaze bands I've seen in ages. I'm sure our buds from The Chemist did well too, but we were on at the same time".

Many bands I've interviewed and spoken with recently say that the only way a band makes money these days is to tour and sell merch. I asked Liam about this and whether or not coming from WA or even Australia places some geographic boundaries in their way.

"It's expensive to tour and do the things you need to do, so it takes a lot of good management to really make it work. We seem to be doing alright so far; I'd like to thank our own management team for a lot of this. The universe has a bit to do with it as well."

"[In the US] we got to hang out with some amazing people who took wonderful care of us while we were on the road, played some sweet showcases with some awesome bands and generally had a crazy time. The shows were very receptive with some successful outcomes."

One of the major challenges facing any band seems to be how they stick together and don't kill each other on tour.

"I think we've spent too much time together to really take petty tour annoyances too seriously, or generally care too long," Liam says.

"There's a bigger picture at hand. If you can't see that, then it's not going to work. We take the piss like you wouldn't believe too. It eases the tension. Do it and have fun whilst doing it. Worry about the other shit later."

So what's in The Novocaines' crystal ball? They've released a video for their upcoming album's debut single Trampled Hearts (I love, love, love this song and big thumbs up for promoting a visual artist in their video!!). Their debut album Idle Time will be released on 4 November 2011, launching at the Amplifier Bar in Perth. (In support of this launch, the band created a montage video, giving fans an insight into how they operate in the studio.) Then tour, tour, tour!

For further news and all that is Novocaines, visit their website.