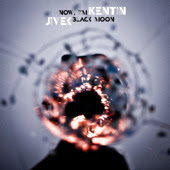 Kentin Jivek is a French songwriter and singer of dark folk and psychedelic music who sings in English, French and Spanish. He has just released his new album, Now I'm Black Moon.

Track one, What If, sets the mood with a 1970s-style acoustic psychedelic feel. Beautiful Tragedy recalls hints of Echo and the Bunnymen's The Killing Moon, with its gentle, strumming guitar and plaintive vocals. Romantic, hypnotic and entrancing. This mood continues with Encore De Bout.

3m is sung in French in the traditional chanteur style of spoken word with music. The title track Now I'm Black Moon harkens back to early Pink Floyd with its crazed, shadow background vocals and experimental sounds overlaid with a simply beautiful central vocal. An interesting song which begs a live performance.

Mother Absintha is like a Mark Ryden painting: innocence twisted and distorted until it resembles a nightmare. Not one of those obvious nightmares that wake you in a pool of sweat, but one that leaves you with faint memories throughout the day, just enough to lend an air of unease. The lyrics are very Freudian.

Die Merseburger Zauberspruche opens with sounds of a balalaika with dark chanting lyrics. This track creates a theatrical air of demons carried through the night on an enduring chorus, reminding me of UK prog folk from the '70s. There are hints - small ones - of early Genesis.

Black Moon Still plods a little with some inaccurate guitar playing that grates on my nerves. Perhaps this shouldn't have made the cut.

The final track In Questio Specchio ends the album with a mood of satanic ritual and drama, of magic and impending evil. Not quite where I thought it would end when I began listening to what appeared to be a gentle, romantic collection of songs, but surprising nonetheless. I would love to see a collaboration between this musician and Tasmanian musician Diable Amoreux. I think it could be dangerous.

All in all, a very interesting collection of songs. Personally, I prefer the former tracks in the vein of  Beautiful Tragedy. But one thing you cannot call this musician is boring or predictable. Now I'm Black Moon is a highly experimental collection of music which you may grow to love. These songs summon something of the spirit world into the living, it's just that the spirits are a little dangerous and somewhat unhinged.

Learn more about Kentin Jivek and buy a copy of this album on his website.

thank you for this very objective vision on the album.
still have pleasure to read it.
k