Otherwise known as "How I survived the white tiles of Soundwave".

My Soundwave Festival experience began on Thursday 21 February around 4.30pm as I was running for my bus home in the Brisbane CBD. I saw a bunch of guys with accents wearing black hoodies outside Rocking Horse Records and, as they looked very lost I assumed they were Soundwave musicians.

"Hi, are you here for Soundwave?" I asked politely. One very sweet guy smiled and said, "Yes, yes we  are". Another big smile. I was about to engage him further in discussion but felt I was getting in the way of some tour manager lowdown conversation of where they should meet at what time etc. So I said bye and went on my way. When I got home, I tried to work out what band they were from the photos on the Soundwave website. I narrowed it down to the blonde guy from Sleeping with Sirens. I sent him a tweet to say "Hi, I think I met you in Brisbane this afternoon?" to which I got no reply. I don't think I'm a part of their target audience. That's okay.

On Saturday 23 February around midday, I set off for Soundwave at the RNA Showgrounds in Brisbane, Australia. It had been raining all week, so I was 'looking forward to' mixing it up with my fellow locals in a mud bath.

Unfortunately, one glance at the timetable the night before revealed many clashes. I wasn't going to be able to see all the bands I'd been excited about seeing, so was a bit disappointed. So I picked the one band I absolutely had to see - Tomahawk - and worked out a schedule around that.

Upon entry into the RNA grounds, the first thing my partner in crime did was head for the food. Why don't we ever eat something BEFORE we go to a music festival? I had a look at the food on offer and wasn't thrilled: your usual festival assortment of fried food and bread and dagwood dogs and more fried food. Somehow, my man found some Manchego meatballs, but I didn't see anything appetising, so opted out. I thought I could last until I made my way around to the other side of the festival to grab some satay or corn on the cob.

I made my way to the main stage area and picked a great spot to see Tomahawk from, behind the first barrier but away from the stage. It was hot - damn hot - and the white plastic tiles on the grass to protect it enhanced the glare and heat factor by 10. I thought, "It's hot, but I'm covered from head to toe and it'll be ok...I want to beat the rush for Tomahawk". At around 38C degrees I could feel my body heating up...not good.

A band named The Blackout was finishing up their set, well aware that everyone was waiting to see Anthrax. The 100 or so very young fans in front of them were pretty excited but it was the few hundred Anthrax fans impatiently waiting in front of the other stage who the band focused on. Looking at their fans, the lead singer of The Blackout yelled "Sing after me, Woooooo", then looking at the Anthrax fans the singer yelled "Sing after me, Booooo". At least he had a sense of humour.


Anthrax came onstage and a band I'd liked back in the '80s renewed my passion for their music. A killer set, an homage to Dio, and possibly my favourite song rendition of the day: "In the End". Fantastic and one of my favourite performances of the day.

It was getting really, ridiculously hot now. I was covered in sweat already, thanks to the glare. See the photo above to see what I mean.

Next up, Tomahawk. Yes! I was thoroughly disappointed when this band didn't announce a side show in Brisbane. I'm in my 40s - let's face it, I'm getting a bit old for music festivals - but I'd bought the ticket just to see them perform. I'd seen Patton in most of his other music concoctions, but never Tomahawk. So imagine my excitement? I'm a shorty and I'd got a really great spot, where I'd been standing for ages in the excruciating heat to see this band. I was stoked. I'd be able to get some great shots of them to show everyone.

Then these two showed up and stood right in front of me.

Too far away from me to ask them to move, as a large gap was between us. So I ended up having to move and stand in front of them to get some pics. By this time, I was feeling a bit lightheaded.

Tomahawk kicked it off with one of my favourites, "God Hates a Coward", and followed with many other fantastic songs such as "101 North" and "Point and Click". An impressive set-list. But midway through, I began to feel a bit off. I spent half the set sitting down on the ground in the shade of the barrier just to get out of the sun. My face was the colour of a beetroot. So as soon as the set finished, I rushed off to the food court again to pay $5 for a tiny packet of hot chips, shove ice down my bra, tip water over my head, take a Panadol and generally act like a 40-something year old at a music festival who should've known better by waiting in the shade until the band I liked came onstage. I also could've worn a hat, had lunch before I left home, drank more water, not worn all black etc etc...

I contemplated going home, but that's not how I roll. So we ran over to see Kyuss Lives.

I don't know much about Kyuss Lives apart from the Homme lawsuit, so I was pleasantly surprised to hear music full of heart and groove. They looked and sounded like they belonged in the early '70s and the funky bass lines got my sick arse bumpin. Very cool indeed.

Next up I battled the crowds to check out who else was playing: too many people in a space not big enough to accommodate them. I shuffled at the speed of a turtle until I eventually made my way to where The Sword was playing.

By the time I got there, I caught their last two songs. But they were excellent...a bit like a less seasoned Kyuss Lives, actually. I wish I'd seen more. One thing I did see while watching their set, though, was the best head of hair at the festival. Luxurious and windblown. Lovely.

I walked over to where Of Mice and Men were playing, but after a couple of minutes burst out laughing. I'm sorry, fans of this band, but they're just not my cup of tea.

Back to the main stage to catch A Perfect Circle. Up in the grandstands this time, I settled down to watch Slayer finish up. What seemed like hours later, they eventually did. I'm not a Slayer fan, so their music all sounded the same to me, like they played the same song over and over and over and over... Judging by the crowd, pretty much every other punter disagreed with me.

By this time, parts of the ground were beginning to resemble a swamp. The kids seemed to like getting muddy. Not me. I'm old. And that's something that was beginning to seep in right about now. 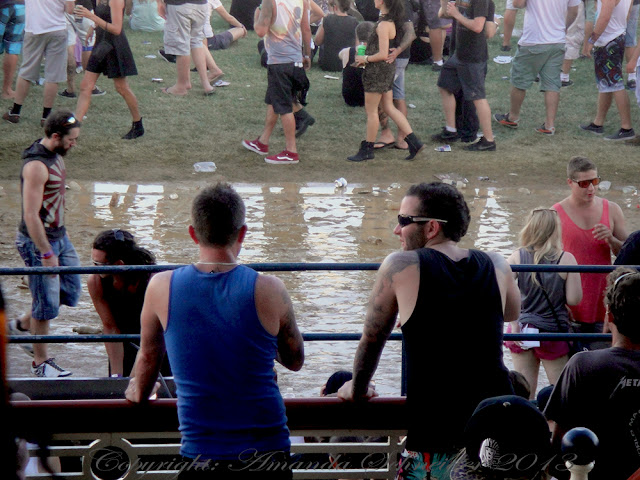 A Perfect Circle finally came onstage and we were relieved! And then they started playing the type of set that sounded like it would really suit an ambient venue...just not a festival. The mood they were trying to create was lost and I could only wonder why they didn't include more songs from "Mer de Noms" that would've got the crowd moving. I actually cringed at their covers, and wondered again why a band with such a great repertoire would choose to play so many at a festival.

This experience was enhanced by the non-stop drunken rambling of two morons who were in front of us. When I politely asked them to keep it down, they just stared blankly at me. I eventually moved. But that's what happens when you stop having drinking areas for over 18s and instead let people consume alcohol wherever they like. Lots of drunks. Lots of pricks. Also lots of drunk pricks feeding booze to underage girls. Not good.

Toward the end of A Perfect Circle's set, I left the festival. I'd scored free tickets to see Einsturzende Neubaten at The Tivoli from a lovely photographer friend of mine, too tempting to resist. Because I'm old, I'd already seen Garbage, Offspring, Metallica, Cypress Hill etc in the '90s, so wasn't going to miss much. My one regret was not hanging around for Linkin Park (who I still call the first EMO band, much to the chagrin of people who are EMOs).

I've heard that Ghost, a band I really wanted to see, was fantastic, but I was just ready to go home, have a shower, something to eat, and go to see EN. It was all a bit much.

I'd hate to say this was my last Soundwave, but it felt like the last time I went to Livid, the last time I went to the Big Day Out. Too many people. Too little room. Frankly, too many cut-off denim shorts, too many shirtless bogans. Many of the bands on the lineup these days are not to my taste (too much "woah woah woah"ing). And I'm pretty sure I'm not in the festival's sights as the type of punter it caters for. We'll see, next year. I'm sure another band I love won't perform a side show in Brisbane and the choice will be: go to Soundwave or not see the band. I wish it wasn't so. But, sadly, that's the way things roll up here in Queensland. 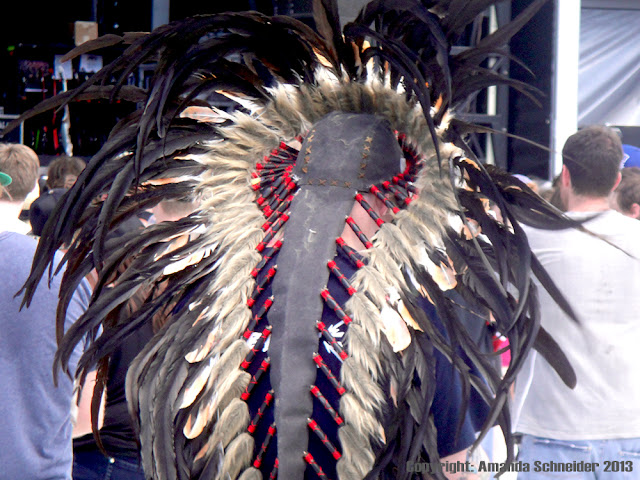 This was just my experience of the festival. I'd love to hear yours! If you're interested in checking out the setlists for the day, visit this site: http://www.setlist.fm/festival/2013/soundwave-brisbane-2013-43d69397.html. If you like surprises, don't :)

For some great photos from Soundwave in Melbourne, check out this gallery from Richard Sharman at Black Shadow Photography.