I saw someone empty a bucket of metal pipes on to a stage and found it mesmerising.

That, in a nutshell, is the beauty of Einstürzende Neubauten performing a show.


And a show it was, on Saturday night at The Tivoli in Brisbane. I felt like I'd been lured into a smoky, velvety, damask-lined Berlin cabaret club in the 1930s. It was magical. The only things that wrenched me back into modern times were the addition of bass lines lubricated with machismo, keys stretching the very capability of my hearing to the point of near burst eardrums.


Then there is Blixa Bargeld. The man is a genius. His voice is an instrument: piercing screams one moment...caressing, accented, sonorous tones the next. The man lit a cigarette onstage in such a sensual way that all the smokers in the venue ran outside immediately to indulge.


The band as a whole presents a controlled performance filled with spontaneity and experimentation. That sounds a bit at odds, but it's exactly this planned conflict that makes their performance so breathtaking. Each band member has his place and each lends a completely different dynamic to the others.

Alexander Hacke's bass playing style is so deviantly, overtly masculine that I found his stage presence to be almost intimidating. His rhythms helped to weave the pieces together and were the reason for the gyrating bodies in the audience. N.U.Unruh is the mastermind behind the 'noises' onstage. Custom made instruments, pipes, wire...whatever this man can use to make sounds, he does. Guitarist Jochen Arbeit isn't a traditional guitarist. Using ring modulators, e-bows, percussive tapping he created chaos and melody. Rudolf Moser's percussion and drumming was stimulating and tribal, lending a gutteral feel to otherwise complex performance pieces. The lineup was made complete by the addition of Australian keyboard player Ash Wednesday. 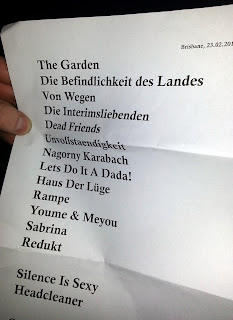 Standout pieces for me on the evening - an evening spent scanning the crowd for old faces from times gone by - were "Silence is Sexy"...so sexy... "Sabrina", and "Let's Do It A Dada". I hope that you caught Einstürzende Neubauten while they were in Australia, as Brisbane was their final gig. If you're fortunate enough to live in Europe, you can see them perform on 5 April in Amsterdam.
The combined careers of these band members is astounding. They're all fascinating, accomplished people in their own right, regardless of the band's achievements. They are true artists, experimenting and pushing the boundaries of music performance. It is this which impressed me so much on Saturday evening. They left an indelible mark.