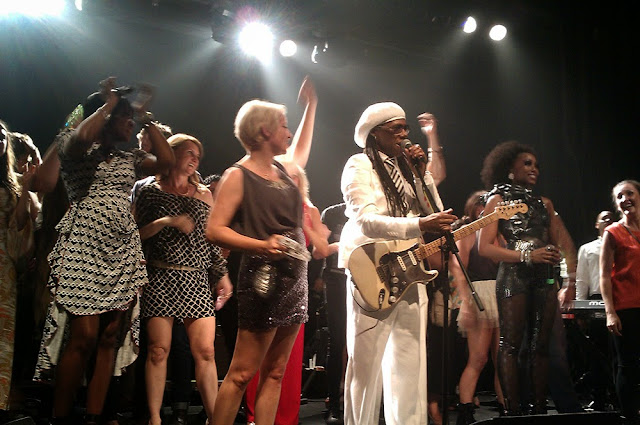 Since I was around 8 years of age, I've been a bit wild about Nile Rodgers. I was a hyperactive little kid, who loved to dance. So imagine my joy when a band released a song that was ALL about dancing!

That band was Chic.

Chic became my favourite band. With their hit songs - Dance, Dance, Dance; Everybody Dance; Le Freak; I Want Your Love; Good Times; My Feet Keep on Dancing; My Forbidden Lover; Real People... - flooding the radio, the groove and sheer enthusiasm of the band always made me happy, as only children can be happy. You know, without a care in the world.

When I saw the clip for Le Freak, I wanted to be one of those glamour girls in a silk jumpsuit pouting and disco dancing.

Unfortunately, I was too young to go to my local version of Studio 54, so I settled for dancing in the lounge room in my flares.


Bring on the '80s. Nile Rodgers, the smooth and talented songwriter / vocalist / guitarist from Chic with the cutest smile in the business came into his own as a producer. Did you know that Nile is responsible for songs such as this one?


...as well as albums by Duran Duran, INXS, and Madonna. He has also produced copious soundtracks, from Coming to America through to the Halo games.

Nile has a sharp and attacking style of playing funk guitar that you can recognise every time he appears on a song. His energy and excitement are contagious and that comes through his fingers into the music he plays and writes.

In short, Nile Rodgers has written, performed and/or produced most of the music from my childhood, teenage years, and adulthood. He is, I believe, one of the most important musicians of my lifetime. His influence is everywhere. 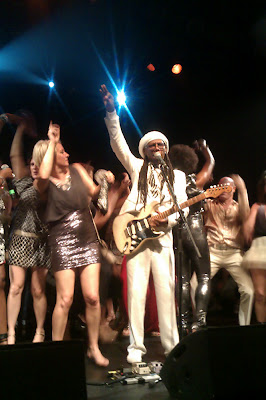 So I was very excited to attend the Nile Rodgers and Chic performance at The Tivoli on Sunday night. It was a dream come true, and that's no lie. Following Nile's cancer diagnosis in previous years, I was worried for his health but this year, he was given the all clear. *fist pump*

From the second I stepped through the front door of the beautiful Madame Tivoli, there was a thrill in the air. People were pumped. A DJ was playing some great dance tunes and people were already getting into the groove. There were hot pants and sequins and moves I didn't know people in Brisbane had in them. This was going to be a fun night.

The support band Mitzi was fabulous. They had a real '80s electronica / funk blend going on, and they were actually quite an impressive local support act. They were followed by a couple of DJs, who were interrupted by cheeky Nile taking photos of the crowd from the stage. People around me in the crowd were going wild at seeing him: "OH MY GOD, THAT'S HIM!!" The women were squealing...I mean, this man still has it.

Nile came onstage to do a soundcheck - a little unconventional but he cracked some jokes and his approachable and friendly nature relaxed the crowd, only to build the excitement again as the band members eventually joined him and they launched into their set.

Was there any song he could've played that he didn't? Probably. But he covered a lot in the time he was onstage. Check out this Wiki listing for Nile...see all those songs by Chic and ones he's written and produced for other bands and singers? They performed most of them. Jealous? You really should be. 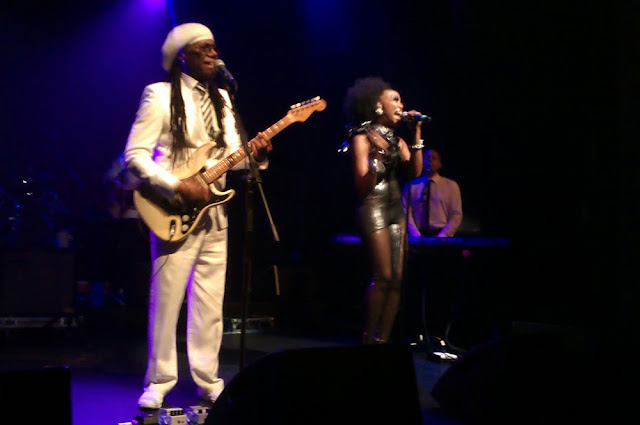 Apart from the Chic hits, some of my favourites performed were Notorious (I am a major Duran Duran fan, as you may already know...), Let's Dance and We Are Family. The musicians onstage were superb, absolutely superb: two keyboard players, a trumpet and a sax, drummer, bass player and two vocalists. The bass player launched himself physically to the front of the stage for a groove attack each time he had a solo, one of the best bass players I've ever seen. He and Nile riffed off each other something amazing. The backing vocalists - well...there was nothing really 'backing' about them at all. They were up front, singing most of the songs, taking turns and singing duets. Their voices were sublimely beautiful and soared. I just stood there with my mouth agape most of the time taking in their brilliance.

I've seen a lot of gigs in my 44 years, and this goes down as one of my favourites, definitely my top 5. The vibe was just incredible. People in the audience were dancing and having a great time, Nile's interaction with the audience was personal and so engaging. At the end of the gig, he even asked people to come onstage to dance. Happiest bunch of tipsy half-clothed people I've seen in a long time ;)


The show ended with the band leaving the stage while Nile did a solo dance-off to Daft Punk's current hit song Get Lucky which he was also involved with, the audience chanting along "Go Nile, Go Nile, Go Nile". Fun...hell yes, it was had!

Nile has promised me on Twitter that he's returning to Australia. He has to - he owes me a hug :) 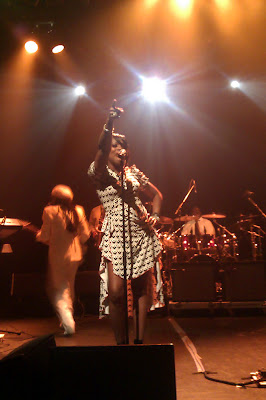 If you missed this stellar performance, you can watch the live video which was taken at the Opera House in Sydney this year. But nothing beats seeing shows like this in person.