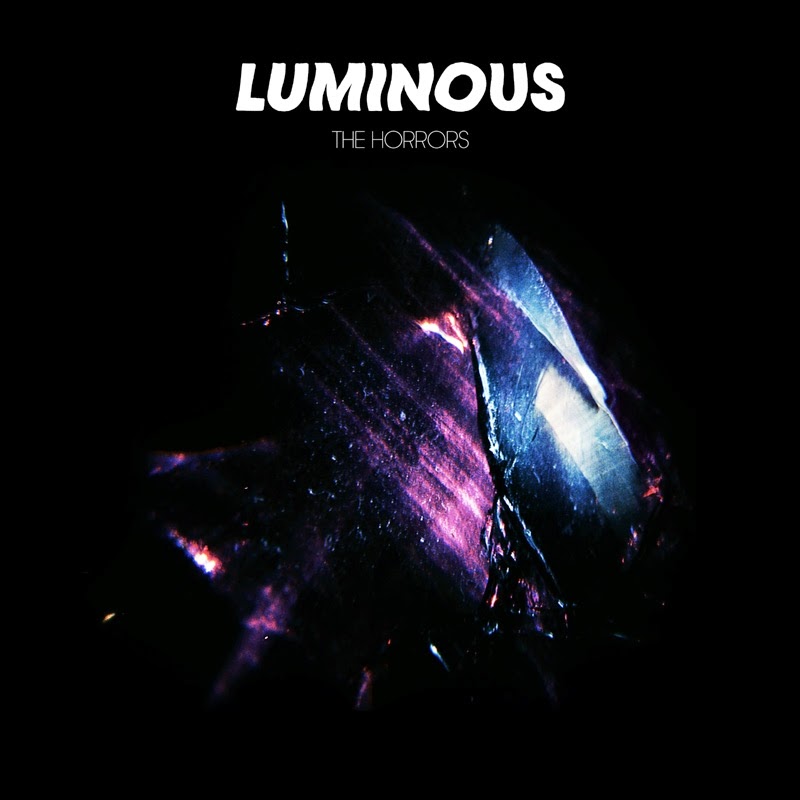 I've been through a long period of wondering at the insignificance of reviewing music, or anything for that matter. Every individual has his/her own tastes and honestly, someone else's opinions shouldn't matter. You either love something or you hate it.

But what I have noticed is the music media writing largely about music I find to be utterly demoralising in its lack of creative flair. So I thought I would write a review of an album that has reached into my being and pulled me out of a personal funk.

That album is Luminous by The Horrors.

Some albums were meant to be purchased on vinyl, and I believe this is one of them. Why? Because no matter what changes come in the way of digital formats, if you have a turntable you will always be able to listen to this album and pass it down to your children / friends' children with the message that THIS is what music is all about, right here.

I've always really loved The Horrors' approach to composing music and how they take inspiration from other decades of music but don't mimic them. I never paid much attention to their early phase of having a really stringent look about their physical selves: the funny names, the dyed black hair, all dressed to match. Still didn't add or detract from how I felt about their sound; it's always filled me with absolute joy.

This album is something on a different spectrum of brilliant.

Where do I begin? No, really. The entire album is glorious, with a cinematic approach that builds and crescendos into being, evident in the first track Chasing Shadows. The band's more recent obsession with psychedelic music means there are moments of transcendental devotion in these songs...you can almost visualise the paisley and the kaleidoscope of colours evoked by the sounds. Every sense of my being is stimulated by this album and my mind's eye has once more become aware.

First Day of Spring reminds me of 1980s alternative bands like The Jesus and Mary Chain, Echo and the Bunnymen, and The Psychedelic Furs. The guitar surrounds the rest of the music, enveloping it in a luscious ebbing and flowing wall of sound. The sounds Josh Hayward seduces from his guitar are brilliant, shining constellations connecting everything else.

Their single from the album, So Now You Know, is just perfect. Starting off with guitar feedback that lulls into a smooth rhythmic bass line, joined by an '80s synth line, then Faris Badwan's slightly atonal voice enters...then the chorus explodes into pure sunlight...the chord changes create a melody that really appeals to me, not necessarily going in the direction I anticipated. The guitar solo is slow, intentional, harmonising with the vocals. These guys, as musicians and composers, know their instruments, know how to write, know when to go for it and when to hold back. Their sense of dynamics is fabulous.

In and Out of Sight's bassline is a perfect blend of funk and New Romantic (a little Duran Duran?). The vocals are sweet, and the synth in this song reminds me of the Manchester music movement in the late '80s. The Stone Roses, Charlatans, Ride...are all meshing here into something new.

Then there are moments in a song like Jealous Sun where I can hear early Gary Numan synths, an intensely Nu-Wave element introduced by keyboardist Tom Cowan, blending with shoegaze and early grunge...the guitar sounding like something from the fingers of Thurston Moore. I really love this song.

Falling Star has a sweet 'Oriental' synth melody, with shoegaze guitars rising into a warm embrace and yet the chorus sounds very psychedelic '60s. Just a little bit trippy...just a bit. Actually, quite a lot. In fact, if you have a bit of a pot habit, this album would be the perfect soundtrack. Not that I'm endorsing...

I See You begins with an almost Kraftwerk-like synth loop moving into Flock of Seagulls guitars and an addictive bass. Seeing Rhys Webb play this song live is a pleasure...the guy has to be the grooviest onstage bass player I've seen in a long, long time. He dances while playing, which is a fantastic play-off to the downward turned head of the guitarist, Josh, who always seems to be off in his own world, focusing on the sounds his pedals are producing. And Faris' voice and onstage presence is so intimidating, intense and still. Theatrical almost. I dream of seeing these guys perform in person. Thank god for YouTube (especially the recent full gig of their Glastonbury Festival performance). Joseph Spurgeon's drums in this song take it to a new place as the music elevates up the octave. Another favourite...perhaps THE favourite?

Change Your Mind is a torch song that wouldn't be out of place on a David Lynch soundtrack, with a '50s style vocal. I think of lovers dancing cheek to cheek in a dark and empty hall... Which is funny because I think it's a song about a guy wanting to be with another girl apart from the one he's with.

Mine and Yours has more of the echo chamber wall of sound Echo/Jesus vibe except for the guitars which again, take their music to a higher place. The distortion makes a pretty song intense.

The album ends with Sleepwalk. Of course, these guys have been compared to My Bloody Valentine, and I hear that a little in this song. It is the perfect song to end the album on. The mood is warming, becoming more gentle, the almost plodding guitar and bass hypnotic, highlighted with the trill synth. The ending is very psychedelic...But the thing I love about The Horrors is many of their lyrics are quite dark or emotional, beautifully written and disguised but also enhanced by their rainbow cloud of music. The lyrics to this song, I find, I relate to:

Hey now what did you tell her
Sleepwalking across town.
She's living deep in a spell
Now you're not around.
I wish you could see how she is now
Thinking all about you.
Her world is broken in two
Don't know what to do.


This album was released back in May. I've been listening to it weekly. It's been like some strange sort of therapy for me. As you probably know, if you follow me on Twitter, the past year has not been the easiest and this band's music has brought me back from the dead. I find myself creating again, painting, writing, wanting to learn new instruments. Isn't it funny how music can do this, and how wonderful that it can.

There are some bands whose music meets me at times in my life when my feelings are very high or very low, and often these bands are the ones I love forever, because I am connected to them. Like the music you listened to as a teenager...the memories are always entwined with the music.

So this album is one I can highly recommend you buy, you treasure, you listen to over and over again. And I hope it becomes a shining light in your life as it has become in mine.