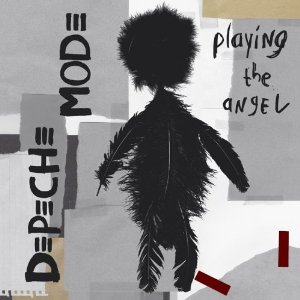 What a stunning album this is. Depeche Mode’s latest release, Playing the Angel, is one of those rare discs that moves from sublime to entrancing.

Andy Fletcher, Dave Gahan, and Martin Gore are graceful dark horses riding the radiowaves, their place upon the throne as dark princes of electronica a certainty. They have gradually moved toward this goal for 25 years, since the release of their debut album in 1981, Speak and Spell, which featured their third single Just Can’t Get Enough, a top ten hit that year. Playing the Angel, their nineteenth album, further explores their sensual brand of electronica that moves body and soul.

From the opening track, A Pain That I’m Used To, Gore’s dark lyrical majesty evokes smoke filled rooms of pleasure, regret and torture, and shines a stark light on the reality of love.

Just give me a pain that I’m used to.
I don’t need to believe all the dreams you conceive,
You just need to achieve something that rings true.

Depeche Mode played an integral role in the acceptance of electronica as a valid form of music, being one of the first acts to create music predominantly around the sounds of a synthesiser. When principal songwriter Vince Clarke left the band early in their career to form Yazoo with Alison Moyet, Gore began experimenting and creating the band’s trademark foreboding lyrics. The band’s evolution from British dance club electronica to gothic lords of menace progressed gradually from hereon in.

Their brand of pain worshipping reached a critical point in 1990 with the album Violator, featuring the song Personal Jesus. With its atheistic lyrics, this release reinforced Depeche Mode’s image of perverse playboys, ensuring this track was spun on every goth club dancefloor at the time.

The band has over the years become infamous for their dalliances outside the perceived norms of society and this experience shows in the intensity of their music and lyrics. When lead singer Gahan was the subject of a failed suicide attempt, his consequent time in drug rehabilitation revealed his ongoing heroin addiction. Suffering, pain, and hedonism seem to cling to Depeche Mode and curiously this makes their music all the more evocative. You feel the meaning in the songs. They touch you.

The Sinner in Me sounds almost predatory, as if the music were an accomplice covering a stalker’s steps behind you.

If I could just hide the sinner inside and keep him denied,
How sweet life would be if I could be free from the sinner in me
...I’m not renowned for my restraint.

I Want It All snakes its way through your mind, with trance-like synth, a beat of a heart, and bedroom whispers.

I see a river, it’s oceans that I want.
You have to give me everything,
But everything’s not enough.

The provocative element of this album is that it is full of songs written about a perverse love, a love that is darkly romantic yet cruel and menacing. Dark passions and psychosexual insecurities are reflected in the mirror of their words when you immerse yourself in their music. And sometimes, coming to grips with your own sins and mortality is a revelation.

We’re damaged people drawn together by subtleties that we are not aware of.
Disturbed souls, playing out forever, these games that we once thought we would be scared of.

Damaged People describes the mutual attraction of depraved souls relying on the power of touch to transcend mortality and to drown in sexuality rather than contemplating life.

Even when Gahan sings positive lyrics in Nothing’s Impossible, the mood in his voice and the music make you feel that perhaps love is impossible, that to reach that glimmer of devotion is a dream from childhood. The experiences through the years have taken away this hope.

Like a mantra; to repeat it is to force yourself to believe, in spite of cruel reality.

Lilian breaks the heart in the most precious way.

Oh Lilian, look what you’ve done.
You’ve stripped my heart, ripped it apart, in the name of fun.

Pain and misery always hit the spot,
Knowing you can’t lose what you haven’t got.

This velvety song, from its breathy backing vocals to Gahan’s deep, melodic voice, touches the skin on your neck and softly traces down your spine, leaving goosebumps along the way.

There is something nearing perfection in a line like that.