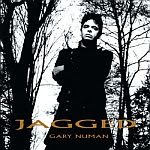 This week Gary Numan releases Jagged, his first studio album in five years. In his 28 year career, Numan has released 17 albums, the most widely known possibly being The Pleasure Principle which spawned his seminal electro hit, Cars. This song propelled him into the limelight in America where, in 1979, the single bound into the American Top 10.

I caught up with Numan the day after his 48th birthday and, despite having a cold and joking that he is “one year closer to death and destruction”, his enthusiasm for his new album, for his life and future career, was contagious.

Numan’s intention with Jagged was to create a heavier, darker, anthemic feel. Working with underground electronic artist Ade Fenton as co-producer has resulted in the fullest apocalyptic sound Numan has ever achieved in his career. Of this collaboration, he cannot be effusive enough. Describing it as an easy, pleasurable experience, Numan says that, although he and Fenton had some differences of opinion, they always had constructive discussions.

“I know he would stand up for what he thought was the right thing to do, but never to the point where we argued about it or fell out with each other”, he says.

“He was fantastic, absolutely fantastic, the amount of ideas he was coming up with. He was just phenomenal, an absolute torrent of ideas. I know it sounds pretty dark and heavy, but it was actually a really enjoyable album to make. The songs were flowing and the ideas were flowing, it was really cool.”

The sound is dynamic. Bristling yet languorous. For the first time in 20 years, Numan has reintroduced live drums, and has included contributions from some notable musicians on the album, including members of Nine Inch Nails, The Prodigy and Siouxsie and the Banshees. The album opens with the Middle Eastern echoes of Pressure, which gives the feeling you’ve just stepped into an alien’s interpretation of a mosque. The coldness of the electronica is perfectly balanced by melody and passion, and his alienated, soulful vocals soar. In songs such as this one, you can hear the sounds which have influenced musicians like Trent Reznor; it is ironic Numan is now being inspired by those musicians he influenced.

The lyrics on this album are intense, dark and sometimes chilling. On Halo he sings, “Who hasn’t had a secret need, a truth to hide, desires to feed?... I’ve never been afraid to face a fear, but there’s no darker place I think than you”. In Fold, he folds all reason, “Screaming your name, I fold you heart and feed on your pain”. Yet there is something in every lyric that resounds with the listener, something personally identifiable, something Numan wanted them to feel.

“I want to trigger experiences and memory in people the way it was triggering my experiences writing it in the first place,” he says.

“And I do think there are going to be similarities, some of those lines are going to touch people in a way that makes them think something, or recognise something, in their own life or in their own past, in a way that is unique to them. And yet the same line that does it – to you, to me, to other different people – and we each have our own view of it which is different. I think that’s interesting. And yet, nonetheless, lyrically I still think it carries a reasonable sort of power. It does make people think and it doesn’t have to be specific to generate these thoughts and feelings.”

When asked how he gets into the mind frame to write such dark lyrics, Numan says he goes into the studio and it’s like the flick of a switch, not the method writing of his formative years.

“It’s like a door to another part of my brain, where all this other stuff is happening… It’s something I couldn’t have done many years ago,” he says.

“And whether it’s come from the wisdom of being older or not, I don’t feel that way now.”

The subject matter of Jagged is the darker side of Numan’s existence, the dangerous things he has done in his life.

“It’s a catalogue, if you like, of the seedier, darker parts of my life”, he says, “but I didn’t want it to be an autobiography and that’s why I wanted this ability to interpret it in different ways”.

There is a common thread throughout the album of God and salvation, but when questioned about this and the idea his lyrics might represent his personal search for salvation, Numan is adamant it is merely a tool of expression through which to portray his emotions.

“I have no belief whatsoever”, he says, “absolutely none. But you can’t argue about it, you can’t state your case, without sometimes seeing it through the eyes of people who do. And therefore, you have to make it reality. You have to accept for the sake of argument, ‘Well, okay, what if He is there? And if He is there, why would He have done this and that?’”

The question of mortality is on Numan’s lips though, since the birth of his two young children, Raven and Persia, with wife Gemma. Although adamant becoming a father has not changed the way he creates his music, Numan does admit that it has changed his perspectives on life and the music industry.

“A friend of mine said to me about having children that for the first time in your life, there is something you would die for,” he says.

“Without any questions asked, you would take your heart out and give it to them. Your whole focus on life becomes less selfish. I guess it does have an impact on the music in a sense because my career is now being driven, and with it my desire to be successful. Your whole view of life revolves around somebody else now. Unfortunately, as I get older, you become more worried about the end. That sounds morbid, doesn’t it? (laughs) I know, it’s pathetic, isn’t it? (laughs) But now, the focus has definitely shifted from me to the children. I wouldn’t change a second of it. I’ve wanted children all my life, but it just took me a long time to find the right woman to be with.”

Some people might still consider Numan as the androgynous introvert portrayed on his ‘80s cover sleeves and that perhaps it is odd for a seriously dark and cutting edge musician to be this family oriented. But he stresses he has always been old fashioned.

“I fully intend to be married for life. I wanted to get married, have children, have the whole stable family thing. I’m old-fashioned when it comes to that. I’m probably living in the dark ages still (laughs), but I come from a very close family. We just live for each other. We’d do anything for each other and we talk to each other all the time. And I want my family to be like that. I love it, it’s the way I’ve been brought up, the way my life has been.”

Numan has been heralded in the press and by other musicians as the founding father of dark electronica and at the core of the new wave music genre. His tormented yet clinical melodies have inspired musicians such as Marilyn Manson, Reznor, Goldfrapp, Queens of the Stone Age and The Killers. However, if the press on Numan is examined from his many years in the industry, there is a common thread: he is unfailingly self deprecating. This musician, who has inspired countless copy cats and music genres, honestly does not believe he is anything special. When asked whether he thought, while he was making this album, that he was making one of the best albums of his career – which in this writer’s opinion, it is – Numan’s response was a resounding ‘no’.

“I make albums that I like – especially more recently, not always in the ‘80s – and then I just hope for the best. I just hope other people like it. I have never finished a song or an album and assumed it is so good that people are going to like it. And it’s always, I swear to you on my life, a genuine surprise when people say they like it, it makes me happy. I’ve been doing this for such a long time and even to this day, when people say they like the album it genuinely brings a smile to my face. I don’t expect it. And I actually want to stay like that, I think that’s good. I would hate the day that I ever write a song and think, “that’s great”.”

Jagged is a great achievement for Numan. He has come full circle: influencing musicians to then be influenced by them. For someone with such a lengthy and experimental career, it is surprising some critics still consider his best work to be from the early ‘80s. When asked how it makes him feel when people dismiss him as “just another ‘80s has-been”, Numan admits it is very frustrating.

“However, it is my job to let people know that I’m still around and I’m still making music,” he says.

“One of the reasons I don’t do these retro tours, nostalgia tours, is because it cements you in an era. Actually, this morning I was asked to do one in America for very big money, but I just don’t want to do it. I think it’s the right move, but time will tell.”

Although launching a UK tour on the 18th March to promote the album, the prospect of an Australian tour does not look possible at this stage, unless the record company gets behind Numan to make it happen.

“It’s nothing to do with wanting to, or I’d be there tomorrow,” he says.

Standout tracks on Jagged include In a Dark Place, Haunted and Scanner. The sound on this album is electrifying, the lyrics sorrowful yet strangely uplifting, the synths unnerving. Numan is looking forward with enthusiasm and displays an unbounded curiosity about other musicians, the way music is developing and life. The paradox of Numan influencing others, only for them to influence him in new ways, is what makes music so alive. A never ending spiral of continuity and evolution. Jagged ensures Numan’s place in the future. Long live his genius, in the body, heart and mind of an astoundingly impressive, yet humble, artist.

You can discover more about Gary Numan on his website.