Killing Joke - Hosannas from the Basements of Hell 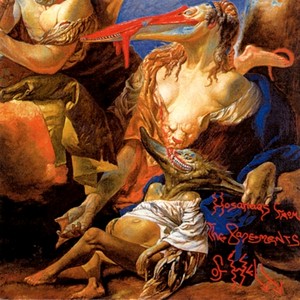 “Dear beloved gatherers, as I write this Raven and I are enjoying a couple of cigars above the studio in beautiful Prague. How is writing/recording going, you ask? Never what one expects, is the answer. There is a sense of victory, optimism and beauty in the new music, a feeling that in spite of the sickness of this world we live in we have created the beginnings of a society based on our lifestyle. The concerts have become a temple, and furthermore our ideals are understood more and more. We are, of course, preparing for our tour of war zones which will take us to Taiwan, Cambodia, Kashmir and Lebanon. Don’t expect the music to sound like anything. We are simply curious at our musical responses to the experience. As far as the lyrics go this time, I have an apolitical approach after the London shows. The only point that matters is you – the Gatherers, the rights of performance and perfecting the way we live our lives with loyalty and love of you, our people. Jaz”

As I listen to the new Killing Joke album, Hosannas from the Basements of Hell, I can feel the sense of history and culture that Jaz Coleman, singer and keyboardist, speaks of. This diary entry was written while the band recorded the album in a Prague basement.

1. Turn stereo up…as far as it will go.
2. Ensure all windows and doors are closed to prevent you from being evicted.
3. Allow yourself to go where this band wants to take you, in mind and body.

Killing Joke is an inspiration. Not many of their contemporaries are still rocking with this much fire and intensity. Since 1979 when their debt album, “Killing Joke”, was released, they have brought the energy and anger of punk forward each decade. Bands such as Nirvana, Metallica, Nine Inch Nails, The Ministry, Fear Factory, and Slipknot have all obviously been inspired by this band, yet Killing Joke still writes music more complex and full of fear and passion than anything I am hearing from current bands in this genre.

My first memories of clubbing at the tender age of 17…I mean, 18 (sshh!) involve a Brisbane venue called “Morticia’s” and the Killing Joke song “Love Like Blood”. Every time this song was played by the DJ, I would be transported into another world—frankly, a rather sensual one—and my body would be transported on those melodies into a musical climax. Every time. I cannot stress how much this band, at the time, influenced my taste in music, my attitude and my outlook.

This album roars to life from track one and doesn’t subside until the last note. It is testimony to the passion driving this band, that long after many of their contemporaries have mellowed or disappeared, they are still delivering such driven work. The first track, “This Tribal Antidote”, gets better each time I listen to it. The guitars are melodic yet persistent, insistent, driving the song into your mind, filling your body with this incredible intensity.

The title track, “Hosannas from the Basements of Hell”, starts off with high energy apocalyptic guitars and then midway through, Coleman’s voice turns almost angelical and the melody lulls you…for a moment, before thrusting again into the abyss. This song is unrelenting and the keyboards create this fantastic wall of sound where there is not an empty space within the entire piece.

“Invocation” has overtures of an eastern European anthem, almost warlike in its marching rhythm. Then, through this strength, you can hear a harp, so delicate. When Coleman begins singing, mid-song, his voice is impassioned. The aspect of his vocals I truly admire is his ability to scream in a throaty invocation of hell one moment, and to sing like a choirboy the next. Actually, Coleman did win the Saint Nicholas Award for the best chorister when he was 10. Reading this man’s biography is awe inspiring; he really is supremely talented in many different musical arenas.

In addition to being a talented chorister and vocalist, Coleman studied piano and violin from the age of six. He currently writes operas, movie soundtracks, writes for the violin, and arranges music for other musicians such as the Rolling Stones. In 2002 he received three Grammies and quadruple platinum sales for his concerto for Czech folk group and orchestra entitled “Promeny”. 2004 saw the completion of Coleman’s War Concerto for violin, choir and orchestra, 12 arias for recording with Sarah Brightman and the continuation of his work as composer in residence of the Prague Symphony Orchestra. This man is a living legend.

It would be remiss of me to speak as though there was only one member of the band. The band consists of Coleman on keyboards and vocals, Geordie Walker on guitar, Paul Raven on bass, and Ben Calvert on drums. This line-up is intense, their musicianship so blindingly mesmerising and TIGHT. Most of this album was recorded in a basement studio in Prague, mixed by Mark Lusardi who, 26 years earlier, mixed their first recording. Old tape echo machines from the late ‘70s were used and the final cut was mixed on radio speakers, creating this heavy distortion. The entire album honestly makes me feel like I’m on drugs…especially if you listen to it through a decent set of headphones, lying in bed at night with complete sensory deprivation. It works magically to transport you to wherever you want to be.

Track 6, “Walking with Gods”, I foresee taking over dance floors in alt clubs. It has that tribal, throbbing bass line that bands like Fear Factory and Rob Zombie have copied. This song feels as though it was written a few years too late; it would have fit perfectly into “The Matrix” soundtrack. Ah, if only I could find a club to play this song…I would be in heaven.

The entire album is majestic, larger than life. I would love to see Killing Joke perform these songs; I think I would implode. As Coleman says, “The concert stage is where I go, quite consciously, to rid myself of many things…It’s a primal place that I go to. If the show is any good, I don’t remember anything of it. I seek to get out of my body and achieve a true intensity. And afterwards I feel a deep sense of calm”. This album takes you to that primal scream, that place of escapism, yet ultimate understanding.