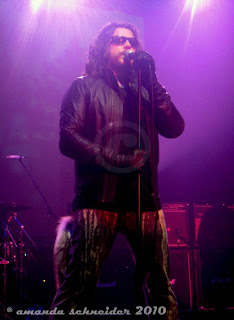 I have mixed emotions about this gig.

I first saw The Cult in 1987, when they had just hit it big in the US. They were brash. They were arrogant. Their lyrics were about sex and peace and sex and revolution. They were touring hot on the heels of their album Electric, a wild, love-child guitar fest channeling the ghost of Hendrix/Steppenwolf past. I saw them at Easts' Leagues Club in Brisbane; I was mad keen for Ian Astbury, my friend for Billy Duffy. Ian made intense eye contact with me throughout the gig, let me bang his tambourine for a bit; as 18 year-olds back then were inclined to do, I fell more than a little in love.

I saw them again at The Roxy/Arena in Brisbane in around 1995. This time, my idols had somewhat changed. Out with the hippy rocker threads, in with the '90s sneakers/short hair look. They looked fit, seemed positive, and were very energetic. Healthy, even. Their sound had modernised; they were current and seemed more than a little hesitant to embrace their hedonistic past. In fact, I got the distinct impression they wished all of the audience members were young enough not to know any of their music prior to their most recent album. They were pushing forward and moving on.

So, I saw them yet again, this time 15 years on. I am now 40. The lovely wafty '80s are over. The rock and grunge of the '90s are over. We're in this musical era where there is no defining ethos or sound...well, none I can relate to anyhow. I live in a city which appears to have lost its sense of identity, culture and history. In fact, our government is allowing the destruction soon of an iconic theatre in Brisbane's CBD and only a handful of people seem to care. Around me, I see apathy and greed winning out day in, day out. I live in hope that things will change, that people will start to care about something other than themselves again, but I don't really see it happening at the moment.

I considered a night out to see one of my favourite bands of all time might be an enjoyable trip down memory lane, that it might provide me with a couple hours of enjoyment amidst what I fear has been the poorest musical period of my life. But it didn't quite go that way.

I got to the gig early enough to grab the front row centre spot. I persevered through the support band soundcheck, then silence, then the support band (who were incredible by the way; see my photos of The Black Ryder on this blog), and then the longest I have ever had to wait for a band to come on stage. In fact, it was a pretentious display of disregard for the audience that The Cult did this. Not only did we have to stand there listening to the same bizarre mix of music play over the sound system - three times - but it is exactly this type of technique Jim Morrison used to stir up the crowd before The Doors would play. It's a well known fact that if you make your audience wait, they will become annoyed and impatient; it's common human behaviour, really. Well, it began working. People were getting drunk, aggressive and intolerant.

Finally, after over an hour of waiting, the band arrived on stage. Billy Duffy just looks the same whenever I see him; the only part of him that changes is his hair colour and cut. Kudos to the English for having good skin genes, because he appears to be ridiculously well-preserved. Ian Astbury, on the other hand...where do I start? Rugged up in gloves and a leather jacket, he looked like he thought he was playing in Alaska, not a steamy Brisbane venue full of sweat and humidity. He appeared to be really uncomfortable in general with being on stage, and seemed to experience mic stand problems for most of the first set. But what struck me the most was that he wore sunglasses throughout the entire first set of their performance. This is a personal bugbear of mine; when a musician wears sunglasses while they perform, I totally disengage. I can't see their eyes, can't see what the lyrics mean to them, and subsequently, the experience means less to me.

The Cult's album Love remains one of my favourites, and these are the songs around which their current tour revolves. If you want to know what the playlist was for the first half of the gig, check out the songs on the album. Better still, go out and buy the album. The line-up was impressive, including John Tempesta on drums, Chris Wyse (bass) and Mike Dimkich (rhythm guitar). I remembered all the words to every song and enjoyed the music...but something prevented me from connecting. I put it down mostly to Ian's disconnection from the whole experience. After a little while, the crowd became more aggressive and, as Ian sang Revolution, I felt the irony creeping into the back of my mind; a bunch of drunk people, pushing others around, singing about a revolution when they didn't seem like people who really give a shit about anything. And it looked like Ian sensed that...or maybe I'm reading him wrong. Nothing was coming together so, tired of being pushed and shoved by drunkards, I moved to the rear of the theatre to watch from afar.

And, of course, that's when it all heated up.

The second half of the gig was The Cult playing many of their well-known songs from the past 25 years or so: Fire Woman, Wildflower, Electric Ocean, etc. Ian whipped off his sunnies and it was like the whole room electrified with energy. He started raging about the bad music around at the moment, about apathy, about...hey, about what I've been thinking. And it was there and then that The Cult re-engaged me, turning the second half into a rocking tirade. And yes, I was pissed off I'd given up that front row centre spot. The people off the main floor seemed to be there more for the music than the aggro, so it was great fun dancing next to people who I dimly recognised from clubs in the '80s. Watching 40 year-old women's faces dissolve into those of the 18 year-olds they were when they first saw The Cult in 1987. The band was incredible, the songs punched out like a kick in the face. But what struck me most was that Ian is an angry young man. And I saw seeds of what I'd fallen for when I'd first seen him perform in The Southern Death Cult. That man really gives a shit. He thinks. He feels. He has what musicians SHOULD embody: PASSION.

I remember the morning after that 1987 gig. I took my Love album to the record fair at the Ekka grounds so The Cult could sign it. I remember Ian sitting there with his sunglasses on, dismissing me as though I was a common fan - well, I was, but not in my own mind...you know, we're all special when we're 18 ;) - and he signed my album 'Wolf Child'. I was so annoyed, for some weird reason, that he hadn't signed his name. But on Wednesday night, I had a glimpse of what began back then; it's as if, with fame, Ian started to feel as though the fame was stealing something from him, so he started going to lengths to protect it. That's what I saw at the beginning of the show; that self-protection.

But you know what? I think he can rest easy knowing that not only does he still have it, but the fans I saw respect and admire this band for the music, not for the long hair, the leather pants, or their music from the '80s. If they started new musical ventures, we'd likely all still check out what they're up to because they're interesting, talented and relevant. These guys have fire in the gut and shoot poetic bullets for words. They will be around for a while longer yet, and I await with keen interest to hear what projects they'll work on next as The Cult, as solo artists, or with new bands.

Thanks so much for taking me back, guys. I look forward to what's in store... 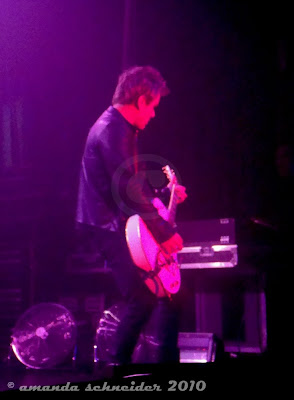 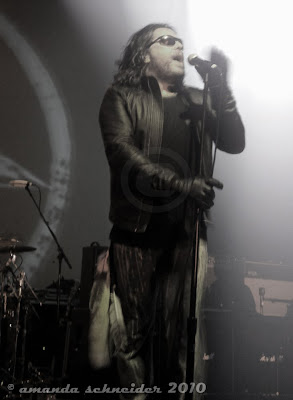 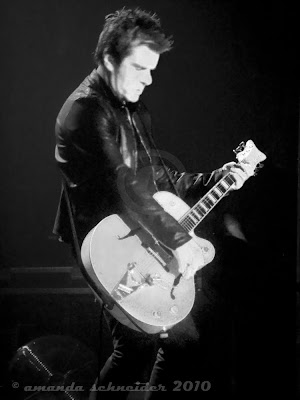 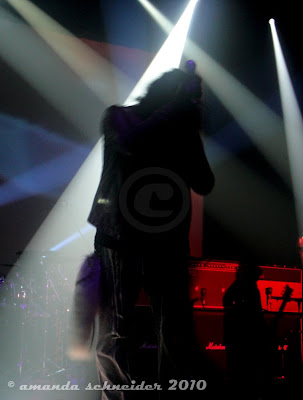 Great review of my favorite rock band. They are a throw back and there will never be another. Thank you so much!

I was at the Brisbane gig - love, love loved it. I too thought the vibe in the 2nd half was better, but I got into the Cult during Electric not Love - so maybe it was better for me. Other people around me had no idea about new stuff they played like Rise or Dirty Little Rockstar - two tracks I like just as much as the old stuff. I was a little disappointed they didn't play anything from Ceremony - particularly Wild Hearted Son or White. Yes I am a die-hard fan - always will be. Great, honest review - thanks!

Hey Amanda, As a fellow brisbaner and music publicist i wondered if you'd be interested in receiving the occasional local tune? check out my blog @ heapsablog.blogspot.com and let me know if you're keen:)

I love your writing! Took me right back to the day I both bought tickets for the 'Love' tour & lost the flowy paisley trippy scarf I wanted to wear to the show! Thanks for the post.