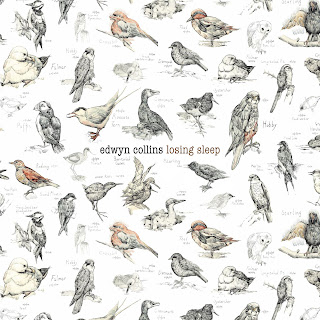 From one of my favourite singer songwriters over the past 30 years, Edwyn Collins, comes his new album, Losing Sleep.

In around 1987, I was introduced to the music of Orange Juice by a friend from the UK (thanks, Craig S). Edwyn was the lead singer of this Scottish post-punk band formed in Glasgow in the late '70s, and I was immediately entranced by his unusual, emotive vocal quality. Back then, as it was more difficult to get your hands on music from overseas, I relied on mixtapes to inform me of the band's music.

Many of you younger readers are possibly more familiar with Edwyn's 1994 hit, A Girl Like You.

I don't wish to be glib about what an achievement this album is. In 2005 Edwyn suffered a pair of life-threatening cerebral haemorrhages; if you get an opportunity, watch the documentary Home Again on YouTube. Following a lengthy and brave rehabilitation, in the middle of a November night in 2008 the urge to write songs - which had deserted Edwyn since his illness - made an abrupt return. Losing Sleep is Edwyn's seventh solo long-player and features tracks co-written with Johnny Marr, Roddy Frame, Alex Kapranos and Nick McCarthy of Franz Ferdinand, Romeo Stodart of The Magic Numbers, and Ryan Jarman of The Cribs and The Drums.

Not only is it incredible that the man is capable of singing and creating music again, but the album matches and surpasses the music he has created during his accomplished career as a professional musician.

I could write a lengthy description of Edwyn's musical style - an energised blend of Motown, '50s rock, jazz, soul and pop influences - but what it comes down to, for me, is his voice. Nobody else sounds like him. His acutely aware lyrics delivered through such a vulnerable voice is what makes his sound so special.

Edwyn's melodic and catchy grooves harken back to a time when music was less about production and more about heart. There are some standout tracks on this album. Humble reminds me of A Girl Like You, with its handclap percussion and sophisticated, smooth modern jazz sounds. Come Tomorrow, Come Today takes me back to his Orange Juice days, with a driving bass groove, tambo and Marr's '60s guitar sound; so beautiful. In Your Eyes soars and swells into a full and luscious aural sensation and combines the best of the '80s with the now. All My Days is a delicate song featuring a gentle guitar stroking the fragility of Edwyn's plaintive vocals.

This album is terrifically uplifting and pure of soul. It is an incredible return to form for a man who has survived some horrific setbacks and challenges over the past few years. Not only is Edwyn's talent impressive and eternal, but both his story and music are inspirational. I thank him for continuing to create music from his heart.

Visit Edwyn's website to buy his album or check out his tour dates.

This article was written for The Dwarf.

I did hear Losing Sleep and I loved it, I'm looking forward to getting the album. He is a charming man and all of his music is good , I have my favorites but Losing Sleep is going to be added to that list, I'm sure they are all top notch as are his other accompllishments, he drew those beautiful birds on this Album cover himself.

That was a really well put together and thoughtful article. I happened upon it as you had the most HD image of his front cover of the album. His drawing is so impressive as well as his music, determination and positive outlook. The documentary about him wells me up watching it.
It's a testament to him that he was had such musicians and artists collaborate and work with him. Makes for an enjoyable and moving listen. Thanks for sharing!