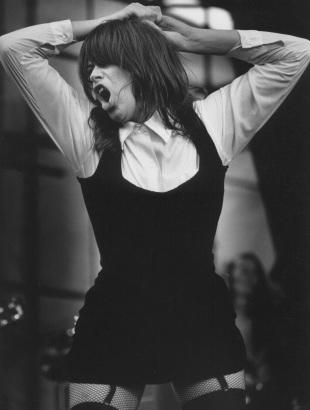 This afternoon, my manager at work turned around to me and said, "My god, Chrissy Amphlett is dead".

As a 40-something Australian, this statement had a massive impact on me.

I arrived home earlier tonight to read the news. Yes, Chrissy has died from cancer, a disease she had battled for several years. She was only 53.

In 2010, Chrissy revealed she'd been battling breast cancer and that, as she'd also been diagnosed with multiple sclerosis, she could not be treated with radiation or chemo. Double whammy. But a strong woman, so I believe we all hoped she would survive.

For people of a similar age to me, who are also Australian, Chrissy needs no introduction. She is an Australian female music legend. For the rest of you, here's what made her so special from my point of view.

Geelong born Chrissy came of age during the wild, uninhibited 1970s. She travelled throughout Europe as a teenager and in 1980, as a 21 year old, met Mark McEntee at a gig and together with Jeremy Paul, formed Divinyls. In 1982, they wrote the soundtrack for the controversial Australian film "Monkey Grip".

That film was pretty shocking to me, mainly because it featured Noni Hazlehurst from my childhood television show "Play School"in a pretty tough role.

The song "Boys in Town" - previously released in 1981 - found fame through its inclusion in the soundtrack and Divinyls became a household name.

Wearing a school uniform onstage while performing decidedly adult moves, Chrissy became known as the wild woman of rock. She was quite aggressive, sullen and not at all like many other female performers in the post disco era of music.

Her distinctive singing style became something that I, as a 13 year old, tried to impersonate. She was a tougher Australian version of Chrissie Hynde, in my mind. Superficially, she had the bangs, she was a female singer fronting a male band, she didn't fit any girly stereotypes. I admired her greatly for, well, her balls. She was a gutsy performer. Here she is in 1983's "Casual Encounter" from the album "Desperate", off which also came the massive hit "Science Fiction".

In 1985 they released "What a Life!", which featured the hit singles "Pleasure and Pain", "Sleeping Beauty", "Good Die Young" and "In My Life". Again, the band changed direction and mood, bringing to their fans a more polished yet darker album.

After a few stop and start efforts at recording, LA producer Mike Chapman finally helped them out, and the album was released almost two years after recording began. It reached number 4 in Australia and number 91 in the US.

In 1986 and 1987, Divinyls came back from the US to tour Australia as part of the Australian Made tour. I was lucky enough to see them for the first time during this tour, and Chrissy blew my mind.

After the tour, Chrissy and Mark returned to LA to write their next album, and "Temperamental" was released in 1988. The album reached number 11 in Australia, but was the last to be released through Chrysalis. Chrissy explained:

"We still owed them more than a million dollars – unpaid reimbursement of their advances for recording, distributing and promoting three albums, and supporting all those tours, yet they let us off the hook. Chrysalis knew, as did we, that we'd never be able to repay such a sum. They figured that because Temperamental hadn't broken us in the States, we were never going to make it there and they'd be smarter to write off our debt as a tax deduction. 'It's time to split', they said. 'We can't do anything more with Divinyls'."

At Expo '88, I was lucky enough to see Divinyls perform again. Chrissy was so sexy and much more polished than I remembered - this happened to a lot of Australian bands in the '80s when they moved to the US to chase the American dream - and I recall all my male friends going crazy for her, but at the same time being a bit afraid of her, which made me laugh...hard. Here they are performing "Back to the Wall" off "Temperamental".

In 1991 they released "Divinyls" through Virgin Records, which became a big hit and finally made them famous in the US. You all know "I Touch Myself", right?

If you're really young, you probably first heard the song while watching "Austin Powers".

I recall revelling in Chrissy's fantastic taste in music when she guest programmed "Rage" in 1991.

In 1996, their final studio album "Underworld" was released. Here are Divinyls performing the song "I'm Jealous" on "Hey Hey It's Saturday" in 1995. I love this song, and Chrissy's voice is sublimely raw and beautiful in it.

In 2006 Divinyls were inducted into the ARIA Hall of Fame. I was so happy that this amazing band that had been a part of my life for so long were finally being 'officially' recognised by the Australian music industry. In the ARIA 'summary' clip, Chrissy is seen in an interview saying:

"I see now that individuality of women is expected and it is accepted a lot more than when I was around."

Her place in the music industry as a groundbreaking buster of stereotypes must never be underestimated.

In 2007 Chrissy announced that she had multiple sclerosis but, even during this time, she was brave enough to pursue innovative treatments and discuss the brutal symptoms she experienced. This was followed by another devastating announcement in 2010 that she had breast cancer. She was treated for cancer in New York where she lived with her husband. I remember reading in 2011 that she was free of cancer, and I breathed a sigh of relief, as did many other fans around the world.

Even when she was quite ill, her humour and resilience came across during a performance on "Spicks & Specks".

I wish I could've had her sing my Corolla maintenance manual to me.

Not only was Chrissy a really interesting and intelligent woman, she had a great voice, great presence...an inspiring female performer (both as a singer and an actor). She was by all accounts a lovely person as well, with a fantastic and saucy sense of humour. And she was a survivor of substance abuse. If you haven't read her autobiography "Pleasure and Pain: My Life", do so now.

During one of their more recent revival gigs, she kissed me on the cheek while I was swooning at her from the front row. I swear, I didn't wash that part of my face for a week.

So, today is a sad day. If you loved this woman as much as I did, you will continue to love her music until you die.