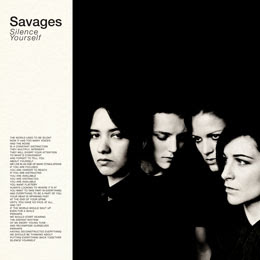 In June 2012, Shirley Manson from Garbage tweeted about a track called Husbands on SoundCloud by a band that sounded a lot like Siouxsie and the Banshees. As you all know, that's right up my dark alley of influences, so I wanted to find out more. In October, I finally saw the band - Savages - performing the same song on 'Later with Jools Holland'. Visually, they harkened back to the bare minimalism of '90s UK band Elastica, however their music and live dynamic was infinitely more powerful. No laidback, UK shoegazers here.

It was all enough to make me curious and to keep an ear to the ground for more about this band.

In April of this year, I saw the clip for Shut Up and Savages viciously imprinted themselves upon me. I found myself nodding along to the dialogue at the beginning of the clip. Yes, yes. These women get it. You know, 'IT'. What's wrong with society and the current business of playing the game of life.

You know those old UK clips from the mid to late '70s, of the Sex Pistols, Joy Division, Siouxsie and the Banshees, the Clash, Southern Death Cult? The ones showing a bunch of musicians who are angry, volatile, passionate, and sick of the status quo...what the music press loosely coin 'punk'. Savages are the first band and 'Shut Up' is the first song in a long time to really make a BIG impact on me. There's a lot of fluff out there, and thankfully this band isn't contributing to the swill in the trough.

In April with the release of She Will, I predicted "these girls are going places" and they have. All of a sudden everyone in the music industry started tweeting about them. Always the comparisons to Siouxsie; a lot of music writers I know who like '80s goth music are big fans.

Fuckers sealed the deal for me. This band is a new favourite and their album is permanently in my ears.

"This song is for all the fuckers you've met in your life."

I saw PiL perform live for the first time this year, and Savages' music and live dynamic reminds me of them. The bass sounds loose and heavy, the guitar on tangents doing its own thing.

Their songs are about empowerment. About relationship dynamics. About men and women and love and lust.

Your serious eyes dehumanise
What you wanted was never sad
Who blew the flames out of your eyes
Why do you treat yourself so bad
(from City's Full)
Savages are in the right place at the right time with the right messages and the right music. So, just buy the album, okay?

Here they are performing She Will at Glastonbury last night.