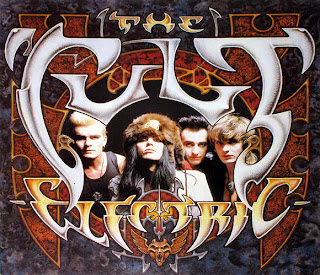 In their heyday, The Cult were unsurpassable by their peers in the alternative music scene. With their blend of shamanic, natural spirituality grounded with melodic guitars, mysticism and, ultimately, hard rock and dance influences, for decades - in my mind - they were at the top of their game.

The other night, after a 40 minute drive to the middle of nowhere, I arrived at Eatons Hill venue in Brisbane to see them perform their Electric tour. This RSL with a dirt car park is not what I'd call the best venue. Not close to the city, not easy to get to with public transport, horrible atmosphere. I just wish they'd performed at The Tivoli like a few years ago. But hey, I made it, after numerous car problems which my followers on Twitter are well acquainted with...

The first people I bumped into at the venue were friends from 1987 who I hadn't seen since I first saw The Cult perform the Electric album at East's Leagues Club that year. I recall being madly in lust with Ian Astbury as an 18 year old swampy, sitting at his feet banging his tambourine. Running to the Ekka grounds the next day so they could all sign my Love album - he signed it 'Wolf Child'. I was a diehard.

I've seen every Australian tour The Cult has made. They've always been interesting and a fantastic live band, changing like chameleons every tour.

This gig was no different in that aspect. From the first guitar chords, Billy Duffy gave his all. What an underrated and absolutely stunning guitarist he is...and absolutely drop-dead gorgeous to boot. Not sure how these men do it, but he looks better now than he did in 1987. His charisma positively dripped from the stage along with the sweat from his guitar. I always suffer serious guitar envy when I see him play, and he really connects with the divine instruments that adorn his crotch.

Astbury didn't seem into the gig as much and his voice wasn't in the best form, although he looked the healthiest I've seen him look in years. He missed a lot of the higher notes, and didn't extend the vocals in songs that really beg for it...sometimes, people just have off nights and also, I've noticed many vocalists experience this problem with higher notes as they get older.

Emotionally, he didn't seem to connect with the audience or many of the songs for the entire gig, but perhaps this was attributable to the sunglasses, which meant no eye contact. Was it performing the old music that bored him? If that's the case, I would rather The Cult tour and play mostly new music. I want enthusiasm. If a musician isn't enthusiastic...why should I be?

While writing this, a very devout fan pointed out to me that Ian had hip surgery a couple of years ago, which probably has something to do with his lack of movement onstage. I'm used to the sensual performer, the groover, the shaker. Maybe his limited movement onstage was to do with this surgery...this is quite possible. I was completely ignorant of this fact, as I usually ignore music press (how odd for a music blogger, I know, but I just don't like the gossip factor). I found this interview from last year in which Ian discusses depression, the surgery, and rising from that situation. I'm glad he did, because he really is one of the most amazing singers I've heard - such a distinctive vocal quality - and that whole self annihilation bullshit is something many of us have battled. The strong survive. I'm glad he's a survivor, like me.

I wish I could've heard anything Astbury said between songs. The sound on his mic was so muffled and low that I couldn't; he was basically talking to nobody. This pissed me off. I respect the man. When he says something, I want to hear it. I found that he was much more vocal about politics, the world, society etc the last tour, when they performed the Love album. This time, he barely spoke between songs, seemed just disengaged, a little quiet...I wonder what's going on in his world that he was this way?

[I appreciate that he scolded the 40-something year old men in the front row for taking photos on their iPhones ALL NIGHT LONG. I was second from the front and still spent most of the night staring through iPhone screens. I did my best to get around this by dancing like mad and jostling so nobody could focus their cameras...but they needed ridiculing. People who experience gigs through viewfinders PISS ME OFF. Stay home and watch a DVD of a concert dudes, seriously.]

John Tempesta on drums was obviously just cruising along. The Cult isn't known for particularly complex rhythms - they've got a solid groove and they stick with it - but John put everything into it, maintaining a solid background for Duffy to riff over. Astbury and Duffy really seemed to feed off his energy at times too, which was great to see.

I had a fantastic time at the gig. I love The Cult's music so much that even an iota of enthusiasm from them motivated me. I danced my arse off and had an amazing time, met some great fans - Cult fans are the best. When Duffy made eye contact, my pants still dropped to my ankles. The crowd actually started slamming to She Sells Sanctuary, which made me chuckle; I recall the floaty goth dances we used to do to that song and, now the fans are older, they're moshing to it ;) The Cult have definitely still got 'it' and really know how to structure a set list for maximum crowd buzz.

I know other people probably love hearing all the old songs, but I would've been quite happy for the second set to consist of mainly new music from Choice of Weapon, or at least more of their songs from the '90s (like Star, The Witch, Coming Down, etc). Instead, the band tried hard to please the fans by including most of their older '80s hits.

I was thinking after the gig, wouldn't it have been amazing if the Soundwave Festival had included them on their line-up for February 2014. Imagine exposing this band to new, younger fans? I think that would re-energise them, and in the process would expose younger people to a great catalogue of songs. I would love to see The Cult play a festival again...they really suit that environment. Last time I saw this was the Big Day Out in 1995 when I had to be pulled over the barrier from the front row after being pulverised.

The support band, Redcoats, were phenomenal. I'd seen them previously at Big Sound Live in 2011 and they're one of Australia's best at the moment. Their performance was stellar, with singer Emilio wrapping himself around his mic stand like a snake, making love to the music. The band's music is fabulous and they know how to rock out and get the crowd moving. Make sure you see them if you get the chance. Check out their Evergreen music video here.

Yes, this gig was worth seeing. Yes, I loved it. Yes, I still adore The Cult. But did I feel Astbury was 100% into it? Not quite. Did this ruin the vibe of the gig a little for me? Maybe. Did this bother most other fans I have discussed the gig with? Not one bit.

Do I regret not buying a Meet & Greet package? Uhuh. Although if I had, I'm pretty sure there wouldn't have been enough time for the discussion on spirituality, politics, society and the world that I wanted to have with Astbury. The man's mind and soul...I love them.

Find out more about The Cult.

View photos from the night on the Tone Deaf website.

The set list for the night can be found here.

Read my review of their 2010 Love tour of Australia.

I was the gig also at the Eaton's Hills, and thought it phenomenal. To tell you the truth, I had not listened to The Cult for quite a while, by the time I left the gig, I was totally converted. I have not listened to much else since. I would Also regret not buying the meet and greet package, but probably just as well..... for their sakes more then my own ...